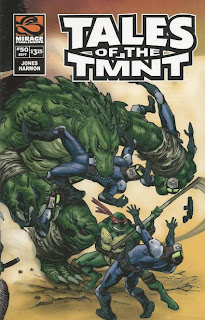 Frontispiece: Sitting atop a stump in a moonlit swamp as the Turtles lurk in the background, Leatherhead ponders the many different kinds of monsters.  For instance, many are not what they seem on the surface, but in fact, they’re actually worse.  Leatherhead decides it’s time for a story…

On a salvage run down in the sewers, Donatello and Leatherhead are suddenly attacked by a gang using high-tech capture weaponry.  Don is hit by a tazer and taken down for the count, while the armored leader of the gang, Razorback, knocks Leatherhead out with a tranq.  Tossing Leatherhead onto a load lifter, they decide to leave Don behind as they weren’t paid to capture him.  Don comes to and follows in secret, watching them load Leatherhead onto a helicopter marked with “Martech” corporate symbols.

Back at the lair, Don and the Turtles do some sleuthing.  They learn that the helicopter belongs to the Martech weapons plant based in Australia.  Tracking some air traffic, Don learns that the helicopter will be connecting with a flight at JFK headed for Melbourne.  The Turtles decide to hitch a ride to Australia and rescue Leatherhead. 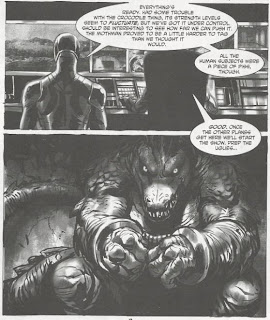 At the Australian compound, Razorback loads a bunyip into a holding cell.  He’s called by the mysterious boss of the organization, a man with cybernetic limbs, who asks for a progress report.  Razorback says that with the procurement of Leatherhead and the Mothman, all the cryptids have been secured.  They’ve also captured all the human subjects his employer requested.  The boss tells Razorback to prep all the cryptids for the imminent show.

Sneaking off the cargo plane, the Turtles find themselves skulking around a heavily guarded compound on the isolated island of Hobb’s Gate.  Sneaking into a command center, they take a look at a security monitor and see a group of notorious mercenaries and assassins gathered in a room.  Mikey takes a commlink and heads through the vents to eavesdrop on the proceedings.

Inside the big room, a voice comes over an intercom, telling the mercenaries that they’ve been collected to participate in a most dangerous game.  There are weapons scattered all over the island, as well as some of the most vicious monsters from all over the world.  The game won’t end until there’s only a single survivor left.  The Jersey Devil is then released into the room and the mercenaries all scatter. 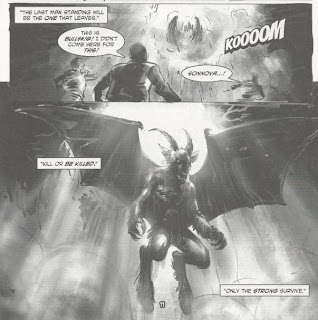 Outside, the Turtles are spotted.  Don and Leo draw the attention of the guards while Raph heads through the vents to find Mikey.  Entering the large room, he’s attacked by the Jersey Devil.  Mikey knocks the beast out with a sack full of rocks and the two make a break for it.

In the nearby swamps, Leo and Don are caught off guard by one of the mercenaries and Leo takes a shotgun blast to the shell.  Before the mercenary can unload another round, he’s pounced on and devoured by a chupacabra.

At the commander center, Razorback observes the monitors, trying to keep the show running without interference.  He sees the Turtles, and realizing they’ll mess up the gambling odds, he decides to call the boss.  Out in the swamp, one of the mercenaries attempts to get an old Jeep started when he’s shot in the back by the boss of the game… a cybernetically enhanced Jack Marlin.  Marlin gets the call from Razorback and isn’t happy.

Elsewhere, Leo and Don have their hands full with a lumbering bunyip.  Leo slices toward its ear and lops off a weird mechanical device.  The bunyip appears to come to its senses and scampers off.  Don inspects the device and finds it to be some sort of neural override.  Leo then gets a call from Mikey on the commlink.  He and Raph have just tangled with the Mothman and are now at a large tower.  Leo says he sees the tower from his location and that he and Don will rendezvous with them there.

Investigating the facility, they find a Sasquatch laid out on an operating table, soon to have a neural override device placed on it.  Don looks through some computer files and learns that the entire “game” is being broadcast over the internet for the purposes of gambling.  Marlin then appears on a ledge above them, with Razorback and his men holding Leatherhead at bay.  Marlin explains that he survived the tumble he took into the underground river during their last encounter, but had to have his limbs replaced with cybernetic prosthetics.  He tells them that Leatherhead has been fitted with a neural override device, which keeps the monsters from attacking him (and thus ensuring that he wins the thoroughly rigged game).  He then unleashes Leatherhead on the Turtles.  As his brothers deal with the rampaging beast, Don works some computer magic and shuts down ALL the neural overrides on the island.  The Turtles and Leatherhead then race to stop Marlin from escaping. 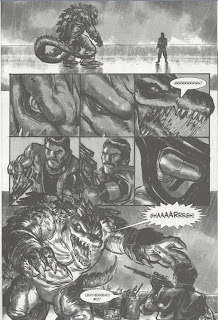 On the roof, they catch him and Razorback about to board a helicopter.  Marlin opens fire on Leatherhead and nicks his right eye.  Razorback and his men, meanwhile, are taken down by a group of Interpol authorities who have arrived late to the party.  Leatherhead subdues Marlin and is about to kill him.  The Turtles beg him not to, so rather than kill the man with his own hands, he hurls him off the roof and into the swamp.  Marlin is promptly attacked and dragged beneath the murk by a bunch of hungry bunyips.

The Interpol agents tranq Leatherhead and the leader, Emil Tendaji, approaches the Turtles.  The Turtles remember him from their previous encounter with Marlin and Emil says that his agency works hard to keep endangered “cryptids” like Leatherhead safe from outside harm.  He promises that all the surviving mercenaries on the island will be captured and that the Turtles and Leatherhead will be returned to New York.  As they all board the Interpol helicopter and fly off, the bunyips below chew with dissatisfaction on some cybernetic limbs.

*Chronologically, I’d say that the Turtles last met Leatherhead in Tales of the TMNT (Vol. 2) #23.

*Marlin and Officer Emil were last seen in Tales of the TMNT(Vol. 1) #6.

*This issue also contained a back-up story, “Threads” by Ryan Brown and Doug Brammer, and a bonus pin-up, “Wanna Race?” by Jim Lawson.

Ever read one of those comics that’s so good, as soon as you finish it, you flip back to the start and you read it again?  Well, that’s basically how I felt about “World’s Deadliest” when I first picked it up.  It’s probably the single most re-read issue of Tales of the TMNT (Vol. 2) for me, as a matter of fact.

The team of Tristan Jones and Paul Harmon had previously proven their worth on Tales of the TMNT #36 and the fan support they received was practically instantaneous.  Even I sent in an e-mail to Dan Berger, saying I wanted to see more of these two.  Knowing how flakey the Mirage editors were when it came to creators and storylines in the second volume of Tales, sending in e-mails to rally support was pretty much the only thing you could do to try and ensure that the best talent came back or the best stories got proper endings (and even that didn’t work, sometimes).  Though it took fourteen issues, we finally got them back and it was well worth the wait.

“World’s Deadliest” is sort of an antithesis to the previous issue Jones and Harmon had worked on, which was a gritty, “realistic” Turtle story full of cop drama and a sobering, ground level perspective.  “World’s Deadliest”, on the other hand, is a bombastic summer blockbuster filled with cyborgs and monsters and a ridiculous premise that perfectly facilitates the explosive story.  While the setup is very simple (a parody of “The Most Dangerous Game” but with cryptids), it proves that any idea can either sink or float based on the talent of the writer.  Jones wrings the maximum amount of excitement out of this one and Harmon does the ambitious scope of the script total justice.

I’ve probably said it before, but Harmon’s black and white style reminds me heavily of something I’d have seen in the heyday of Creepy or Eerie.  It’s dark, it’s dynamic, it’s spooky and it’s just really damn cool.  Leatherhead hasn’t looked this downright ferocious and intimidating since Steve Bissette drew him for a bonus pin-up in Tales of the TMNT (Vol. 1) #6.  It’s a nice counterpoint to the “brainy” Leatherhead who often got more page time in Mirage than his man-eating alter ego.  There is, of course, one glaring error on page 11, where all 4 Turtles are seen together when Mikey is supposed to be in the vent.  But by the time you get to the stunning reveal of the Jersey Devil at the very bottom of that page, you’re liable to completely forget about the art flub.

And the wrap-around art cover really took me back to the old TMNT (Vol. 1) issues, too.

So far as the continuity of the issue goes, it’s a bit weird.  Leatherhead gets his right eye shot out, seemingly as a means to explain why he was missing an eye in TMNT(Vol. 1) #45… So I originally thought this was supposed to be set between his first two appearances.  But that doesn’t really work, as Leatherhead is missing his left eye in TMNT #45.  I think it’s better to set this story after Berger’s “Leatherhead trilogy”, where the mutagen boosters given to Leatherhead by the Illuminated Utroms granted him an accelerated healing factor (his right eye is healed again by Tales #63, anyway).

Really, though, I’m just thinking about this shit too hard.

As a “cryptid”, Leatherhead certainly fits right in, as he was inspired by the old urban legend of alligators in the New York sewers.  As for the other cryptids, I was kind of disappointed by the sparse selection (only Sasquatch, Mothman, chupacabra, the Jersey Devil and some bunyips), but Jones got as much mileage as possible out of all of them (save Sasquatch, I guess).  Being an Australian-set story, it only makes sense that the bunyips get the most page time and I enjoyed seeing a rather overlooked creature of legend receive a spotlight.

If you look at Tales of the TMNT (Vol. 2) as a “pick and choose” series, and you’re only after the cream of the crop, then make #50 a priority.  The story is fun, the art is lavish and the Michael Dooney frontispiece is amazing.

Grade: A (as in, “Although with all the giant spiders, great white sharks and venomous koalas, I imagine most Australians live ‘World’s Deadliest’ every single day of their life”.)
Posted by TMNT Entity at 3:57 PM