“Attack of the Replicants”

Frontispiece: On the surface of a space station, Leo is battling a screeching bat-monster and wondering where the bullshit statement “in space, no one can hear you scream” came from. The encounter, also, reminds him of a story…

In the Haradrim Galaxy, on the third moon of Ch’Tok, a cargo ship pulls into the secret base of the Illuminated Utrom Alliance. The Utroms (who all have glowing swords tattooed onto their heads) unload the unconscious Leatherhead and their leader, Brother Ildak, smirks to himself.

Down in the sewer lair, Splinter is instructing the Turtles in their lessons when a Transmat beam appears in their home. Out of the beam step a pair of Utroms: Emissaries Ribky and Kuroda of the Multiverse Defense Council. They have come to the Turtles to ask for their help in a grave matter. A splinter faction of the Utroms known as the Illuminated Utrom Alliance are about to initiate their all-out assault on the Triceraton Homeworld. The Illuminated believe that the only way to attain peace in the universe is to destroy all hostile lifeforms. They plan to start with the Triceratons and work their way across the galaxies. As the Turtles have experience entering and escaping Triceraton facilities, the Utroms hoped that they might be willing to lend a hand. Raph and Mikey are hesitant about helping the Triceratons, but then the Utroms tell them that the Illuminated not only have Leatherhead hostage, but that they plan on targeting Earth, next. The Turtles immediately agree to help. 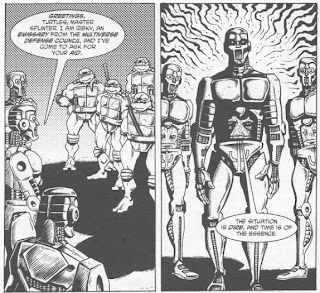 At the Illuminated base, Ildak approaches Sister Grum in her lab. Grum tells him that the replication process will work perfectly and that Ildak’s army will be ready soon. Ildak then pays a visit to Leatherhead in his prison cell. He tells Leatherhead that the Illuminated had been visiting him for some while, causing his blackouts with anesthetic so that they could pump him full of more mutagenic compounds (thus causing his growth, healing abilities and mental instabilities). They did this as a means to perfect Leatherhead into the ultimate killing machine, perfect for their Replicant army. Leatherhead begs for death, but Ildak tells him that his sacrifice will lead to peace throughout the universe. He then prepares the final booster shot that will rob Leatherhead of his intelligence so that he’ll be a subordinate leader of the Reptile Replicant armies.

The Transmat beams the Turtles to the Multiverse Defense Council scout ship orbiting Ch’Tok and they are debriefed by Kuroda. Kuroda says that a spy within the Illuminated base will soon deactivate the enemy’s Teleportal Inhibitor Screens, allowing the Turtles to be transported inside the base. They’ll then only have until 11:44 to procure Leatherhead and reach the rendezvous point before the bomb the spy has planted within the base detonates.  The Turtles ask how they will rescue the spy, but Kuroda tells them not to be concerned, as the spy is not part of their mission.

The Turtles are teleported to the asteroid (which apparently has a breathable atmosphere) and they infiltrate the base. They free Leatherhead a moment before the final injection is administered and begin their escape to the rendezvous point. Entering a huge cargo bay, the doors slam shut behind them and they are ambushed. Ildak appears on a platform, holding Emissary Ribky hostage. He tells them that Ribky was the spy and he shall meet the same fate as the Turtles before pushing the Utrom into the cargo bay. Ildak then orders that the Reptile Replicants be unleashed with orders to kill the Turtles, Leatherhead and Ribky as a test of their strength. As the Turtles and Leatherhead fight for their lives against the monsters, Don takes command of an Illuminated walker mech outfitted with machineguns and blows the rest of the Replicants away. 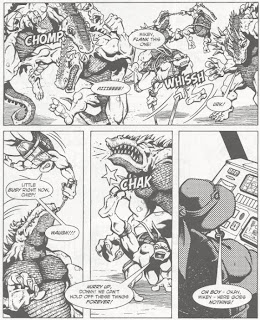 Ildak flees, but finds no one is returning his evacuation commands. He makes the terrifying discovery that the Replicants have rebelled and taken over the ship, killing all the Illuminated onboard. Ildak attempts to escape, but is eaten alive.

The Turtles see that Ribky was injured in the fight and, with time running out, attempt to carry him to the rendezvous point. He tells them to leave him behind, as his was a suicide mission. He had the bomb surgically implanted in his body so that, whether their mission was a success or not, he would be able to be taken hostage and destroy the asteroid. The Turtles reluctantly leave Ribky behind and escape through the Transmat beam an instant before the asteroid explodes. 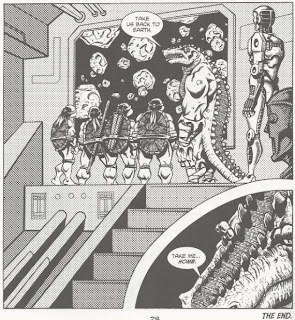 Onboard the scout ship, Leatherhead asks why rescuing him from the Illuminated was worth so much trouble when he’s nothing but a monster. Kuroda explains that, when the Utroms were stranded on Earth, Ribky was the one in charge of transporting hazardous waste materials from the TCRI building. It was he who lost the canister of ooze down the sewers that mutated both the Turtles and Leatherhead. Ribky always felt responsible for having created them, and in some ways viewed them as his own children. He proudly gave his life so that they could survive. As Leatherhead reflects on this, he asks the Utroms to send him back to Earth… To his home.

*The Turtles last met the Utroms in “Terror by Transmat”.

*Kuroda references the TMNT’s escape from the Triceraton Homeworld in TMNT (Vol. 1) #6.

*Chronologically, Leatherhead will return in Tales of the TMNT (Vol. 2) #50.

*The Utroms will commend Leatherhead for his work in stopping the Illuminated Utrom Alliance in TMNT (Vol. 3) #24.

*The Turtles will learn the full extent of the "Multiverse" in Tales of the TMNT (Vol. 2) #58.

If “Attack of the Replicants” has one drawback, it’s that the title monsters play an ultimately small role in the comic, only menacing the Turtles for 3 pages before being taken out with a machinegun. For those hoping to see the Turtles fight a horde of Leatherhead clones, that can be just a little disappointing.

Misdirecting title aside, though, this was still a satisfying conclusion to Dan Berger’s “Leatherhead trilogy”, tying up all the loose ends begun way back in TMNT (Vol. 1) #45 and bringing poor Leatherhead some much needed closure. All the poor guy ever wanted was to be reunited with the Utroms, but in the end he finally realizes that he’s happier on Earth. Exactly why, I’m not so sure, since all he ever did on Earth was mope around in the sewers, building a transmat.  To each his own, I suppose.

Sadly, Leatherhead’s future won’t be too peaceful, as he’s kidnapped (again) and forced to endure a “The Most Dangerous Game” parody, then continues his mood swings well into Vol. 4, bouncing back and forth between “Bruce Banner” and “Hulk” at random. Last time we ever see him, he’s stuck in “Hulk” mode, battling Gameraph for raw meat.

We can’t all have happy endings, I guess. And this is about the closest to a happy ending Leatherhead will ever get.

The reveal that Ribky was the Utrom driving the waste van was a nice nod to continuity and this issue’s big shocker. Ribky regarding the Turtles and Leatherhead as his “children” might have been pushing it a bit, but I can definitely see how a character described as unerring in his duties would feel responsible for the creatures he accidentally gave sentience to. His final speech to the Turtles was a nice moment, as was Kuroda’s eulogy in the final pages.

Berger’s “Leatherhead trilogy” is a little all over the place, probably due in part to the installments each having been written with many years between them. In reality, it’s actually a 4-part story, though Leatherhead doesn’t have anything to do with the fourth chapter (Tales of the TMNT #34). Still, while it doesn’t read all that smoothly, it remains one of my favorite Leatherhead storylines and does a lot of work in building his character (by applying some retroactive continuity patchwork, but whatever).