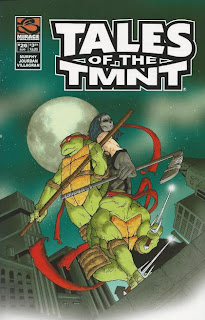 “The Value of Gold”

Frontispiece: Smashing his way through a horde of gorilla-looking robots, Donatello thinks to himself how he hates seeing good robots go bad. Of course, there is no such thing a good or bad robot, as they’re simply a product of their creator’s programming. Don equates this to MMORPG characters and the players who control them, which reminds him of a story…

Inside an MMORPG, the anthropomorphic gorilla, Malbec, leads Moscato (a cat) and Steen (a bird) on a hunt for gold so that they can advance to the next level. After fighting a few bad guys, they each acquire an equal amount of gold. However, only Moscato and Steen level-up; Malbec is left behind. 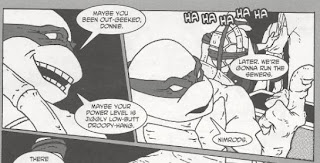 In the sewer lair, Donatello (who had been playing as Malbec) is furious. He doesn’t know how he could have been left behind when he had earned the same amount of gold as his friends, so he immediately calls up “Steen”. In a cabin in a cornfield, a lazy-eyed middle-aged man answers and embarrassingly admits to “Malbec” that he and “Moscato” bought extra gold off of eBay the night before so they could level-up faster.

Using real money to buy virtual money is news to Don, but after a few web searches (actually, he just reads one article on the New York Times website), Don comes to the conclusion that the trade, though perfectly legal, is immoral and must be stopped. Getting the address of the virtual gold farm, Don encourages Casey and Raph to come with him to beat up all the employees and shut down the operation. Wow. This is terrible. 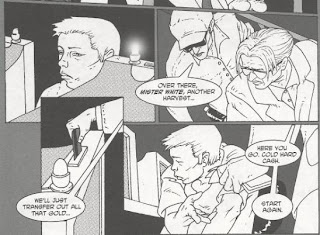 Anyway, they arrive at the “factory” and find guards patrolling numerous cubicles manned by half-asleep and malnourished foreigners. Every time they make a “harvest”, they’re paid in cash on the spot. Don is righteously indignant and he, Raph and Casey put a beat down on all the guards. They then accost the owner of the factory and give him one last chance to explain himself.

The owner, however, has no need to explain himself. The employees all gang up on the Turtles and Casey and demand that they leave. One of the employees says that the hours are long and the pay is low, but they are all working there by choice and can leave whenever they wish. Furthermore, they are all illegal immigrants and they need the job to feed their families back home.  They are victims of "the system". 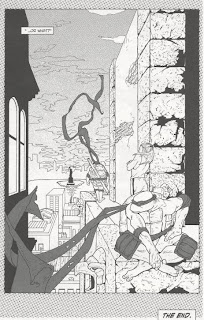 The Turtles and Casey leave and then go pout on a rooftop overlooking Liberty Island, wondering where America went wrong.

*The chronological placement of this story is a little strange due to certain circumstances. Casey is still a vigilante, so it must take place before “City at War” (when he retired). The Turtles are shown living in the sewer, so it must take place after TMNT (Vol. 1) #21. However, MMORPGs are a decidedly modern thing and placing this story right after “Return to New York” would put it in the 80s. Mirage has never been consistent about whether it uses a static or fluid timeline, though; sometimes using hard dates and sometimes employing anachronisms in flashback stories (cell phones in the “Gang Wars” arc, for instance). Nothing much to do about it.

Steve Murphy mentions in the opening editorial that he got the inspiration for this story after listening to National Public Radio and hearing a story about Chinese MMORPG gold-harvesting factories. And so we end up with this strawman story about the evils of online gold-harvesting plants… in America. And why America has lost its way. Because of something Murphy heard that was happening… in China.

You know something? There are a LOT of jobs in this country that pay low and extract a high amount of labor from employees with next to no benefits. It’s called “retail”. My first job paid me $5.15 an hour and I worked 9 hour shifts running left and right to help customers, ring tills and stock shelves. That’s just the way reality is. The amount you get paid doesn’t necessarily equate to how hard you work. Just ask anybody on Wall Street for the other side of that coin.

So yeah, to work in an online gold-harvesting plant probably sucks. But guess what? It’s a job. You are there voluntarily and you are getting paid for your efforts. Murphy, even in his editorial, parades the situation about with buzz words like “slave labor” and “sweat shop”, but I don’t think he understands what those words even mean.

Murphy sews and stuffs some more strawmen to fabricate his argument with the illegal immigrant employees, who in the end kick the Turtles and Casey out because they WANT to work their jobs and make money to play video games. Go figure. Murphy still plays them up as the “victims”, as they make these sad faces as they tell Don to leave, like they’re still crying for help but can’t do anything about their predicament.  The fault is blamed on "the system" which allows these affronts to human decency to perpetuate.

…Yes, they’re getting paid to do voluntary work and they’re “victims”. Are the wages sub minimum wage? Murphy doesn’t say, but even if they were, guess what? They’re illegal immigrants. If they want to get paid over the table and not be taken advantage of then they can move here legally, earn more and pay taxes for all those roads and public services they enjoy so much. I don’t want to open up the can of worms regarding illegal immigration, but all I can say is that if you want to work in another country and circumvent paying taxes while still using all the services tax payers foot the bill for… then don’t expect the same quality of life as the legal residents.

Beyond just the ridiculous, insubstantial, fictional outrage Murphy concocts for this joke, we have Don, Raph and Casey acting outrageously out of character. Murphy seems to use Don as a cipher for the “uninformed, jumping into situations headfirst” by having Don come to a conclusion after reading one online article, only to be given the business by the immigrant workers who want to keep their jobs. But does that sound like something Don would do? Read one article online then try to destroy a legal business because he is overcome with moral outrage? And don’t even get me started on the fact that none of the workers or employees seem to notice or care that there are giant turtles walking around (to say nothing of Don giving Raph and Casey the finger, because that’s totally something he’d do)…

The only bright side to this disgrace is Diego Jourdan’s artwork. He administers his gritty, expressive style with that use of extreme perspective and foreshortening that I love and tries to get the most out of the script he can.

“The Value of Gold” may very well be the worst issue of the second volume of Tales of the TMNT. In his haste to write a story about an uninformed crusader trying to bust up a “morally unjust” operation, Murphy proves he’s no better than Donatello, as he jumps into the topic, creating sloppy strawmen to support his random vitriol and basically pulling everything out of his ass short of the kitchen sink. The plot flows poorly, the timeline placement makes no sense, everyone acts out of character and the foundation for the moral “lesson” is shoddy and confused (China has online gold-farming factories so shame on you… America?).

Grade: F- (as in, “For shame, America. Paying people cash to play video games… Will the injustices of this country never cease!?”)