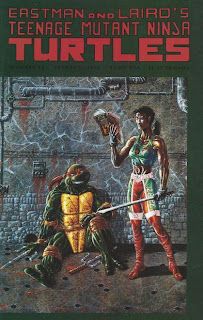 Down in the sewers, Lucindra and Raphael are having another sparring session and Lucindra is trashing Raph, as usual. Taking Raph’s counter blows in stride, she finally tells Raph they’ll have to wait until tomorrow to finish things, as she has go. As Lucindra heads topside and Raph disappears down the tunnels, they fail to notice several Foot Soldiers observing them.

Raph returns to the lair and his brothers ask who his new sparring partner is. Leo is upset that Raph has been skipping his training sessions with his brothers in favor of some human. Splinter comes out and asks to know the name of Raph’s friend. Raph reveals it is Lucindra. 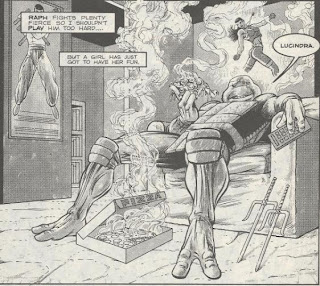 Coming out through a subway tunnel, Lucindra remarks in amusement to herself how far below her own skill level Raph is and that she’s merely teasing him in their sessions. Still, she has fun, which is the only reason she keeps leading him on. As she heads topside and back to her apartment, she encounters scores of people she knows, all of whom either want to go out with her or want her to tell her brother, Malcolm, to pay up the money he owes before he gets hurt. Outside her apartment, a dealer reminds her that Malcolm’s time is short and she ignores him. As soon as she’s gone, Foot Soldiers sneak up on the dealer and kill him. Ignoring a love note from some “loser” taped to her door, Lucindra enters her apartment and finds Malcolm crashing on her couch.

Down in the sewers, Leo tells Raph that he cannot see Lucindra ever again. Leo says that they have to remain a close family unit in order to survive and, as leader, he forbids Raph from “going his own separate way”. Frustrated, Raph concedes that Leo is right. 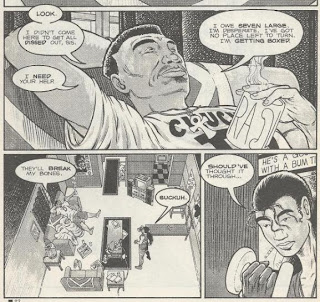 At her apartment, Malcolm is begging Lucindra for money to pay off his pushers. Lucindra refuses, telling him he’ll finally have to face the consequences of his irresponsibility, even if it means having all his bones broken by pushers. She finally kicks Malcolm out and tells him to leave his spare key.

At 11pm, Lucindra wakes up and heads down to the sewers for her session with Raph. Raph is waiting for her with some bad news, but before they can talk, he senses the presence of enemies. The Foot Soldiers attack, but Lucindra isn’t impressed. Effortlessly, she proceeds to take them down by the dozens. Raph joins in and things start to go their way until a Foot Soldier unleashes a flurry of shuriken. Raph is too slow to dodge most of them and is knocked out by their poisons instantly. Lucindra dodges most of hers but gets nicked in the arm. She fights through the haziness and defeats the last of the Foot Soldiers, then picks Raph up and tries to carry him to safety. She is eventually knocked unconscious, not by the poison, but by Michaelangelo. Leo had led his brothers to follow Raph and see if he would really cut ties with Lucindra like they told him too. 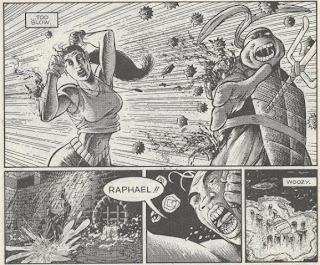 Back at the lair, Raph and Lucindra have recovered from the poison thanks to a special brew of herbal tea prepared by Splinter. The Turtles are so impressed by Lucindra’s skill that they ask her to stay and train with them and teach them her moves (while they teach her the art of ninjutsu). She declines the offer, realizing that she’s become so caught-up in fighting that she’s neglected her brother and family. She gives Raph her Africa medallion as a token to remember her by and leaves.

*Raph will mention his relationship with Lucindra again in TMNT (Vol. 3) #25.

*The remnants of the Foot Clan have been out for revenge since TMNT (Vol. 1) #21.

*Peter Laird has stated that the only issues of TMNT (Vol. 1) published between TMNT #21 and TMNT #45 that are considered canon are TMNT #27 and TMNT #28. This makes TMNT #44 a “non-canon” story, even though there is nothing in its events that contradict Mirage canon. The reason for this declaration by Laird is that nearly all issues between #21 and #45 were done by guest creators (the two cited canon issues were done in-house) and thus their legal ownership status is difficult to determine.

*Rick Arthur pitched a sequel to "The Violent Underground" titled "24 and 7" which would have featured an older Raphael and Lucindra.  The story was rejected due to the end of the "Guest Era", but Arthur has made thumbnails from the pitch available on his DeviantArt account.

Rick Arthur is a superb artist, there is no arguing that. “The Violent Underground” is an amazing-looking issue. His environments from the labyrinthine sewer systems to the trash-covered streets are amazing and draw you into the world, while his sense of layout is fantastic (the overlaying of the panels on the sewer trash on page 6, or the Turtles being projected over the corner of the brick wall on page 18).  And he really knows how to render one Hell of a fight scene. The guy is just a DAMN good artist.

But his writing isn’t so hot.

Lucindra is utterly repulsive in how perfect in every way she is. She’s a better fighter than the Turtles to the point where they beg her to stay and teach them her moves at the end. She’s totally hot and sexy to the point where three pages consist of nothing but her walking down the street and being asked out by guys, invited to parties and being told by every passerby how amazing she is. She’s tough and streetwise and doesn’t take crap from nobody to the point of kicking her deadbeat brother out. The Foot Clan is even beneath her, as she takes them out with ease and even evades the attacks Raph is too slow and unskilled to avoid.

She’s just the best ever at absolutely everything and it makes her annoying. And speaking of "annoying", as I remarked in my review for “The Name is Lucindra”, her overuse of then-contemporary street slang to make her “hip” and “with it” really paints the attempt at making her “cool” distractingly thick.

If anything, “The Violent Underground” is less a Ninja Turtle story and more a vehicle for introducing the public to Rick Arthur’s “awesome new character”, Lucindra. The issue is by and large a focus on her and her life, family and daily irritations (“So many guys hitting on me and friends inviting me to party after party! Why must I be so damn attractive and perfect!?”) with the Turtles not just being cast by the wayside, but being turned into casualties of Arthur’s desire to prove just how “totally awesome and amazing” Lucindra is. Not only is Raph first trashed by Lucindra in a sparring session and then punked by a gang of Foot Soldiers, but he’s then reduced to begging Lucindra to stay and teach him how to be as cool as she is.

Arthur doesn’t seem to really understand the characters too well, either. The Turtles all talk with stilted dialogue, never using contractions for some reason. Raph’s behavior is inconsistent, too. I can understand him getting angry and frustrated when Lucindra beats him at sparring and makes fun of him for being a terrible fighter, but would Raph really fall in line when Leo lectures him and actually says, “You cannot go your own separate way”?

Last time Leo pulled that shit, Raph threw him through a wall.

And why do the Foot Soldiers kill the pusher outside Lucindra’s apartment, anyway? He didn’t see them and the Foot Soldiers didn’t attack Lucindra while she was in her place, so what was the point of that? One of the conflicts in this is story is that simply by being associated with the Turtles, Lucindra has put her life in danger with the Foot Clan. But the Foot Clan actively improve her quality of life by conveniently killing the pusher harassing her brother for no readily apparent reason. And what happens after she breaks it off with Raph, anyway? Do the Foot continue to come after her? I wouldn’t be surprised if the Foot Clan decided to leave her alone because “Oh man, she’s got so much skill we could NEVER possibly defeat her!”

“The Violent Underground” is a whole lot of eye candy, but the focal character is positively unlikeable. The transparent attempt by Arthur to parade her as “the best thing ever” is overbearing and makes actually reading the story a chore, to put it mildly. It makes me happy to know that she never appeared again.