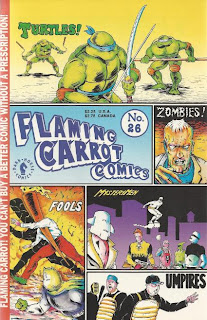 The Mysterymen have successfully routed out a hiding place being utilized by a gang of zombies (who had disguised themselves with people masks).  Reporters converge on the scene and interview the Sphinx and the Shoveler, who say that there may be a connection between the zombies and the Vile Brotherhood.  Inside the building, Mr. Furious takes care of the last zombie, hurling it out a window.  As they take one of the zombies hostage, a human rights activist, Dr. Hissel, registers his displeasure with the excessive force employed by the Mysterymen.  As he tries to soothe the injured zombie, though, the corpse hurls him across the New York skyline.  Stunt Fly chases after him as Mr. Furious makes a televised threat to the Vile Brotherhood. 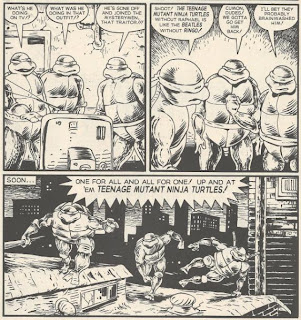 Down in the sewer lair, Leo, Don and Mike are watching a news report on TV.  One of the stories involves the recent disappearance of Frankenstein’s disembodied head from the Museum of Natural History.  A former employee explains that the head came in with a shipment of artifacts that were saved from Nazi destruction during WWII.  The head, still alive, eventually learned how to roll like a beach ball and escaped.  The Turtles then watch a report on the recent activities of Flaming Carrot and the Dark Avenger (whom the media mistakes as “Bread Boy”).  The Turtles recognize his fighting style as Raph’s and, thinking their brother has abandoned them to join the Mysterymen, rush to the surface to get answers.

Elsewhere, Flaming Carrot and the Dark Avenger are still on the prowl for Vile Brotherhood activity.  All they find, however, are a pair of broken breakdancers (they danced so hard they broke their own spines).  They’re approached by Leaf-Blower of the GI-Jims, a Canadian group of superheroes.  Leaf-Blower asks if they’ve seen any of the Fearless Umpire gang, as they’re rumored to be in New York.  They answer in the negative, and as Leaf-Blower disappears, Flaming carrot decides to head back to his hideout and consult his crime computer about the Fearless Umpires.

On the streets, Mystic Hand is giving driving lessons to the alien Mysteryman, Screwball.  They see a pair of suspicious individuals on the sidewalk and Screwball asks them if they’re terrorists.  The two men shrug their shoulders, lift up their jackets and reveal tons of guns and explosives.  Mystic Hand compliments Screwball on his fine work. 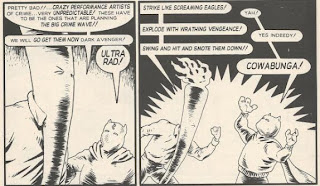 At the hideout, Flaming Carrot consults his "computer" (a rolodex) and brushes up on the history of the Fearless Umpires.  They were defeated by the Apprehenders in 1961, but resurfaced in 1982 under the leadership of Robert Babo, a former performance artist.  Recruiting other disenfranchised art students, he’s been using the Fearless Umpires to commit bizarre and meaningless crimes ever since.  Flaming Carrot wonders where they can track the Umpires down and Dark Avenger recommends the Umpire State Building.

At the empty building where Flaming Carrot rescued Raphael earlier that evening, the two weird-os with detachable limbs and extending eyes (identified as the Vague Dudes) usher a skeleton into their quarters.  They see that Raph has escaped from beneath their amnesia ray.  The Vague Dudes and the skeleton then laugh maniacally.

At Mysterymen HQ, Mr. Furious and Big Dipper are shaking down a hood for clues on the Vile Brotherhood.  The hood says that the Mysterymen came to New York City a week early; that the Vile Brotherhood were planning their crimewave for NEXT week.  Now that the Mysterymen are in town, they’ve cancelled the scheme altogether.   Disgruntled, Mr. Furious and Big Dipper head for the nearest bar to grab a drink, unaware that the Ninja Turtles are watching them from the shadows.

At the Empire State Building, Flaming Carrot and Dark Avenger take out some Umpire guards and steal their uniforms.  Infiltrating the meeting, they sit in on Babo’s speech to his gang.  He intends to levitate the building and steal it from New York.  One of the Umpires asks if they’ll ransom it and Babo explains that they don’t commit crimes for profit, but for the sake of art.  He then introduces the mastermind of the scheme: Frankenstein’s Head.  Frankenstein’s Head, having spent decades in a museum, is now well-learned in the mystic arts (though he still yearns for a new body) and assures the Umpires that he can levitate the building. 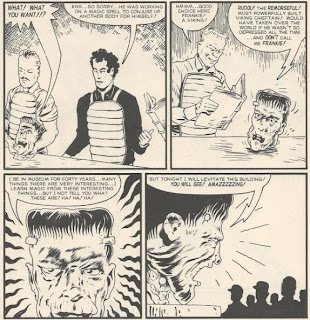 Giving Dark Avenger a card with the Mysterymen’s address and phone number on it, and a bubble pipe that the Mysterymen will recognize as his own, Flaming Carrot dispatches his sidekick to go get back-up.  While Dark Avenger is doing that, Carrot attempts to stall the Umpires with a game of tag.

Dark Avenger attempts to call the Mysterymen, but the Spleen fails to hear the answering machine due his headphones playing music too loud.  Dark Avenger decides to go to their headquarters, but he’s suddenly delayed by the Ninja Turtles.  There’s a brief scuffle, but Dark Avenger calls it off when he realizes that the Turtles look exactly like he does.  He then pulls off his mask, revealing himself to them as Raphael (though he doesn’t know it).

*This issue also featured a “Flaming Carrot Pop Quiz” and a “Hey Kids! Meet the Mysterymen!” back-up strip by Burden and Starr.

A better issue than the last installment.  While I still don’t find Burden’s brand of humor funny, I’m coming to enjoy some of his story-telling techniques.  The way each bit of nonsense flows into the next, sending the characters on the trail of the villains, is actually pretty fun to follow.  It sort of reminds me of “The Great Piggy Bank Robbery” or other screwball cartoons, where the plot feels “made-up as they go”.  Just, you know.  Without the jokes.

I haven’t read enough Flaming Carrot comics to know who half these Mysterymen are, though most of the members featured in the movie are accounted for here (just missing the Bowler, Blue Raja and Invisible Boy, I think).  Given that this is a Flaming Carrot comic first and a Ninja Turtles crossover second, the TMNT take a backseat to the ongoing plot of the book they’re guest starring in.  The issue is punctuated with random gags and segues; some more fully conceived than others.  The humanitarian doctor threatening the Mysterymen with brutality suits getting chucked across the city was pretty groan-worthy.  I’ll admit, though, that the bit with Screwball and Mystic Hand spotting the terrorists got a good smirk out of me.  I think it was the way the terrorists just shrugged and gave up so easily.

In the opening editorial, Burden explains that in order to get this issue out early, he had to call in a quartet of “assistants” to help him with the art (to the point where they produced 9 pages in two days).  So with that in mind, I don’t know how much of this thing Burden actually drew.  At the very least, Burden properly credits his assistants who helped him on the art and even challenges the readers to try and figure out which pages were done by him and which were done by his assistants (I’m not familiar enough with Burden’s style, so I was unable to figure it out).  It’s a nice show of integrity on Burden’s part.  So often in the industry, star artists will credit an assistant for “backgrounds” when the reality is the “assistant” ghost-drew the whole issue for them (Pat Lee was perhaps the most notorious scam artist in this regard).

If there’s one minor thing I’ve liked so far about this comic, it’s that Burden rather defiantly uses trademark names in references, such as name-dropping Marvel and DC characters as coexisting in the Flaming Carrot’s universe or having actual beverages like Sprite appear in the book (as a small plot point, no less).  Now ‘n days, everybody’s so afraid of getting sued, you can’t even reference “McDonald’s” anymore.

Anyway, one issue of this left.

Grade: C+ (as in, “Casanova Frankenstein was a better villain than Frankenstein’s Head.  Just sayin’.”)
Posted by TMNT Entity at 1:20 PM