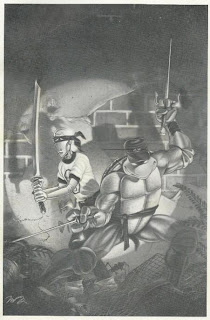 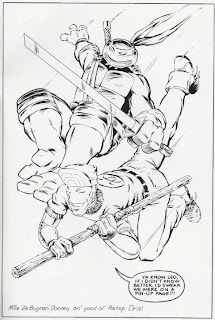 It's no secret that I'm a fan of Dooney's short-lived series Gizmo, so these crossover pin-ups with the main character Gizmo Sprocket are some of my favorite bits of bonus art.  Despite often being shown to coexist in the same universe, and even having characters such as Renet and the Fugitoid appear in various Gizmo comics, Gizmo and the TMNT never actually had a proper crossover beyond these two pin-ups.  Attempts were even made by Dooney to get a Gizmo toy produced for the original Playmates TMNT action figure line, but nothing came of it.

Beyond these pin-ups, the only other crossovers we ever got were a cameo made by Fluffy at the end of TMNT (Vol. 1) #47, when TMNT villain Chote is sent to the future timeline of the Gizmo characters, and a flashback cameo by both Gizmo and Fluffy in the short story "Credo" as part of a line-up of the Ninja Turtles's friends and acquaintances.