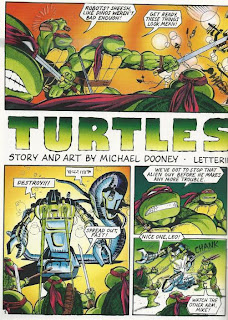 As the robots appear from Henry’s time gauntlet, the Turtles prepare for yet another weird throwdown.  With some effort, Don and Mike successfully take out the tank with arms while Leo and Raph obliterate the serpentine robot. 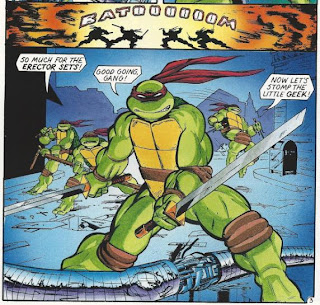 That settled, Raph is ready to pick up where he left off and throttle Henry.  Leo calms him down and demands an explanation.  Henry tells them about the time gauntlet and shares another piece of bad news: As the gauntlet is meant as an observation device, time has been “frozen” around them (hence why no one in Florence has noticed all the fighting).  Even worse, it won’t “unfreeze” until they figure out how to work the gauntlet and send Henry and Betti home.

Don gets to work helping Henry figure out the gauntlet (to seemingly no progress) while Mikey teaches Betti how to twirl some nunchakus.  After an hour of this, Betti starts to get bored and bugs Don and Henry.  She decides to show them which button she pushed that caused the whole fiasco and accidentally unleashes a trio of samurai warriors.  Raphael groans in frustration…

Well hey, at least we got an explanation as to why no one in town seemed to notice the giant turtle people battling a bunch of dinosaurs and robots.  That was starting to bug me.  Of course, if the gauntlet freezes everything when sending users through the time stream, why weren’t the Turtles frozen along with everybody else in Florence?

Because then this would have been a really shitty comic, I guess.

As is a well known fact, Dooney draws only the shiniest of robots thanks to his skilled inking, so the two kill-bots that appear in this segment of the story look suitably chromed.  Steve Lavigne’s colors are especially impressive on the robots, using color gradients and light reflections on their polished surfaces.  Reminds me of the old Heavy Metal magazine covers only without all the tits.

Anyway, we’re almost through with “Teenage Mutant Ninja Turtles Attack!!!”.  In retrospect, I probably should have reviewed all four segments in one sitting, as there isn’t a whole lot to say about the story in 6-page chunks.  One little detail I’ve neglected to mention is that Betti is proportioned not like a midget, but like a normal woman scaled down in size as compared to the Turtles.  Like a miniature person.  It gives her this subtle alien look that’s fitting, considering her origin.

Grade: T (as in, “The presence of time-displaced samurai warriors gives me flashbacks to ‘TMNT III’, which I guess is the worst thing I can say about this whole story”.)
Posted by TMNT Entity at 5:40 PM