So, you ever wonder what Krang's original body looked like before he was banished to Earth from Dimension X? 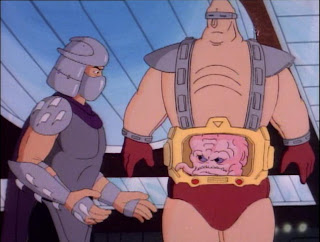 Although Krang was based in appearance on the Utroms from the original Mirage TMNT comic series, his brainy, tentacled look was supposed to be unique to him alone.  As he explained in the season 1 episode "Hot Rodding Teenagers From Dimension X", his body was destroyed when he was banished to Earth.

Well, there was that one time in the season 3 episode "The Four Musketurtles" when the writers, story editor and artists all forgot that part of Krang's origin: 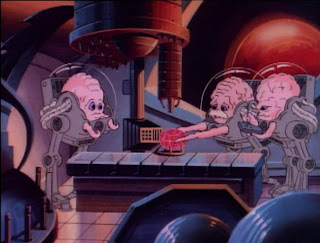 But let's just forget about that.

The mystique of Krang's original appearance inspired the duo of Steve Murphy and Dan Berger who, among other occupations, designed action figures for the Playmates TMNT toyline.

In 1990, they submitted two designs.  One of which played to Krang's status as a warlord by giving him a gladiator theme (and questionable taste in loincloths): 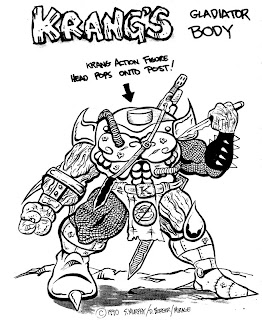 Their other attempt gave Krang a similar buff, anthropomorphic physique, but endeavored to make it more frightening and grotesque.  Basically, Krang's original body had no skin: 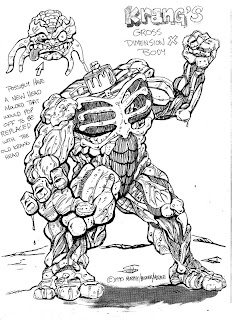 Both designs were rejected by Playmates, alas.

It wasn't until the season 7 (1993) episode "Invasion of the Krangazoids" that the mystery was finally solved: 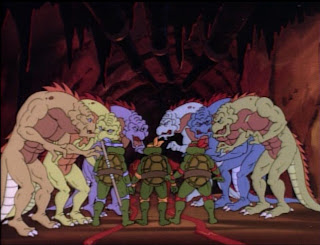 So there you go.  Krang originally looked like a t-rex with amazing abdominal muscles.