TMNT: The Coming Out of their Shells Tour promotional comic 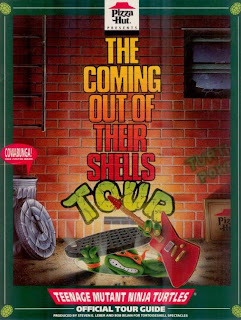 “From Under the Streets to the Top of the Charts”

Down in the sewer lair, the Turtles are sparring (and judo-flipping Mikey onto pieces of furniture).  Splinter, irritated, tells his sons to sit down and shut the hell up.

Splinter informs the Turtles that ever since they defeated the Shredder, they have used all of their free time to hone their martial arts skills.  However, he feels their free time would be better spent honing new abilities… musical abilities!  He tells his sons to each choose an instrument (an electric guitar, a bass guitar, a keyboard and a saxophone) and learn the ways of harmony and balance as only music can teach.

Eventually mastering those skills, Splinter then tells the Turtles to use their newfound abilities to bring joy to the rest of the world.  The Turtles do so by initiating The Coming Out of their Shells Tour... Which brought anything but joy to the people who experienced it.

*The “story” continues in The Coming Out of their Shells Tour itself, where Shredder (presumed defeated) resurfaces with Baxter Stockman to take April O’Neil hostage and try to destroy all music (because he claims to hate music... via a rap song).  The Turtles eventually defeat him with the power of rock ‘n roll.  To see the story for yourself, you can always watch the video on You Tube, but hoooooly shit you do NOT want to do that.

*This comic was released in 1990 as a promotional item at participating Pizza Hut restaurants.  The comic came with a poster, a program, a cut-out Ninja Turtle mask and a cassette tape of the TMNT: The Coming Out of their Shells Tour soundtrack.

*Though I’m not sure exactly when in 1990 Pizza Hut had this promotion, The Coming Out of their Shells Tour premiered on August 17, so presumably it was around that time of the year.

A very special thanks to TMNT fan “JMMedia” over at The Technodrome Forums for sharing this 2-page promo comic.  It’s funny; I don’t remember ever owning the comic or any of the other Pizza Hut promotional stuff, but I DID have the cassette tape soundtrack and I DO remember getting it at Pizza Hut.  But at age 5, I probably threw the comic away without thinking.  And I don’t believe I ever listened to that soundtrack all the way through.  Clearly, I was a 5 year-old of discriminating tastes.

The staff behind this little comic are uncredited, but it’s pretty obviously the work of Steve Lavigne and Ryan Brown, who did a lot of promo art in the Fred Wolf animated series style way back in the day.  Much to my surprise, it actually sets up the “plot” of The Coming Out of their Shells Tour, explaining just why the Turtles have ditched their whole “ninja secrecy” dealie and stepped into the spotlight.  Well, “explaining” might be a little generous, as we don’t know the circumstances of Shredder’s supposed defeat and Splinter only seems interested in putting his brats on tour because he’s sick of them hanging around the lair.  But at 2 pages, hey, they get a lot in there.

Anyway, like most promotional comics, this qualifies as “neat” and little more.  The Coming Out of their Shells Tour is one of the more notoriously terrible artifacts of Turtle-Mania and anything related to it, at best, might elicit a groan of painful recollection from those who endured it back in the day.  Still, my stated goal is to eventually review EVERY Teenage Mutant Ninja Turtle comic ever published, and even at 2 pages, this thing counts.

I send my gratitude out to the online fandom for saving me from having to pay for shit like this.

Grade: N/A (as in, “Now wait a second, here.  In this comic, Splinter encourages the Turtles to go out on stage and perform for crowds, but in ‘Secret of the Ooze’ he chastises them for creating the Ninja Rap at a night club?  There’s just no pleasing him.”)
Posted by TMNT Entity at 10:02 PM