TMNT: The Secret History of the Foot Clan #4 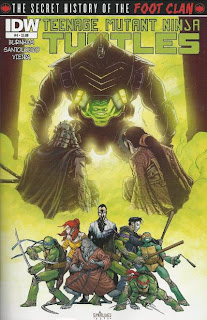 The past: Oroku Saki has killed his father, Oroku Maji and claimed it was the work of assassins.  With Masato “missing”, Saki has taken control of the Foot Clan.  Hamato Yoshi reluctantly swears his obedience. 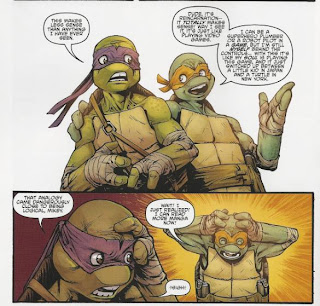 The present: At the Skara Brae pub, the Turtles, Splinter, April and Casey try to convince Dr. Miller that reincarnation is an actual thing.  Mike reads a line from “The Secret of the Foot” that confirms their spiritual beliefs, but that isn’t what shocks everyone.  What shocks everyone is that Mike just read Japanese.  Which makes sense, considering he’s the reincarnation of a Japanese boy.  This convinces Miller of the factuality of reincarnation just as Casey points out that Shredder, Karai, Alopex and a bunch of Foot Soldiers have arrived outside the pub (the ninja were tipped off by an informant).  Standing outside the front door, Shredder demands Splinter surrender.  Splinter finds Shredder’s actions strangely familiar…

The past: Saki, Yoshi and several Foot ninja stand outside the front of a small cottage.  Saki orders Shibata Takamori to come out and face him.  As he shouts his demands, he quietly dispatches ninja to go in through the back while Takamori is distracted and kill him and his family.  Yoshi asks why Takamori’s whole family must die and Saki explains that “a man’s sins fester in his family’s blood”. 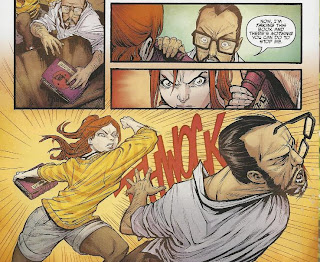 The present: Thanks to this flashback, Splinter tells his sons to expect Foot Soldiers from the rear of the pub.  Right on cue, Foot Soldiers swarm in and the Turtles, Splinter and Casey start fighting.  Miller attempts to snatch up “The Secret of the Foot” and bring it to the Shredder, as he feels the secret of immortality is a scientific breakthrough which cannot be squandered.  April socks him in the face, taking back the book and trying to bring him to his senses.  Miller hightails it outside and bows before the Shredder, promising his services.  Shredder tells him that for his sake, the book had better not be lost.

Splinter tells his sons to escape through the back while he exits the front and distracts the Shredder.  Splinter and Shredder throw down, but Shredder realizes that Splinter’s children are nowhere to be seen.  He dispatches Karai and Alopex to hunt them down.  Casey pulls the van around and the Turtles and April start to pile in when Karai and Alopex show up.  Leo and Raph stay behind to hold them off while Casey, April, Don and Mike get away with the book.  Before leaving, April calls 911 on her cell phone, figuring that police intervention might scare the Shredder off.  She’s right and the Shredder retreats as soon as the sirens start blaring. 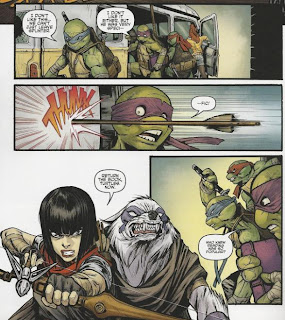 A few days later, Mike finishes reading “The Secret of the Foot” and learns how Shredder gained immortality.  Unfortunately, due to a number of missing pages, it does not explain how to counteract the immortality.  Regardless, Splinter feels they have learned much from the book and promptly lights it on fire and drops it into the sewer so that Shredder can never have it back.

At Foot HQ, Shredder calls Karai and Miller to his chamber.  Karai apologizes, but he silences her.  Shredder explains that Kitsune has been in a sleep of immortality the same way he was, but the whereabouts of her body are unknown.  He had hoped to learn the location from the book, but writes the tome off as lost forever.  He assigns Miller the task of finding Kitsune’s resting place… or die. 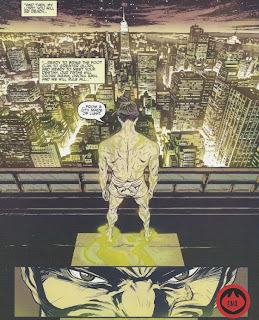 Some years later, Kitsune completes her preparations of the ooze and the process necessary to grant Saki immortality.  Saki drinks a potent version of the ooze and then commits suicide.  Kitsune places his body in an ooze-filled casket and has it hidden away by their sons.  Over the centuries, the Oroku family guards the casket until at last, when the time is right, Karai opens it.  Following the ancient instructions, she cuts her hand and her blood revives Saki.  Saki stumbles out onto the balcony of the Foot’s skyscraper headquarters and looks upon New York, “the city made of light” which Kitsune promised him they would rule from.

*This story is continued from TMNT: The Secret History ofthe Foot Clan #3.  The main storyline continues in TMNT (IDW) #21.

*This issue was originally published with 3 variant covers: Regular Cover by Santolouco, Cover RI by James Harren, and Cover RE Jetpack Exclusive by Kevin Eastman and Ian Herring.

I’m not being hyperbolic when I say that “Secret History of the Foot Clan” is one of the greatest TMNT storylines ever written.  It’s just so… Good!

Santolouco and Burnham pen an epic script that really fleshes out the mythology of the IDW TMNT universe.  The Krang War arc was published simultaneously with this miniseries and it also fleshed out the mythology of the new series, but in a way that put a greater focus on the science fiction elements.  “Secret History” delves into the opposite side of the coin, the supernatural and mystical elements and it feels like we’ve spent the last four months doing a LOT of world-building between the two titles.  What’s even better is how the two sides of the mythology bleed into each other (with the “Iron Demon” being an Utrom and the “magic potion” that grants Shredder immortality being ooze from Utrominon).  All this interconnectivity enhances the richness of the universe and I love seeing how it all falls into place.  Anybody not sold on the reincarnation aspect of the IDW origin should be a believer after this miniseries.  And if not, well, I dunno if there’s any pleasing you people!

Santolouco and Burnham continue to get the voices for the characters right, with Mikey really shining in this installment.  His analogy comparing reincarnation to playing multiple video game characters is sloppy and questionable, but it’s the sort of thought process that makes sense for a guy like him.  And before Mikey can get too poignant, he realizes that he can now read more manga and geeks out over it.  Yeah, that sounds like Mikey, alright.

The fact that, so far, only Mikey can read Japanese is an interesting concept; that the Turtles are tapping into their previous lives at different rates.  Don is still unconvinced about the reality of reincarnation, so it makes sense that he’d be the least likely to connect with his former life (whereas Mikey, being more accepting of crazy shit, would be the first).  I hope Waltz, Burnham and Santolouco explore this idea further in future stories; showing each Turtle reaching into their own forgotten past in their own different way.

Miller playing turncoat was a surprise (I figured he was just gonna die), but a pleasant one, too.  The villain roster is rapidly growing.  Between Baxter Stockman and Dr. Miller, both Krang and Shredder have abused intellectuals in their service, assigned to special projects they need to complete or die.  Stockman and Miller should probably get a drink together at some point down the line.  I’m sure they’ve got stories to tell.

What’s really enjoyable about “Secret History” is that it functions as a standalone tale (that would make a great movie) while fleshing out loose ends from earlier in the series and setting up new plot germs of its own.  It’s the hallmark of a truly well-plotted story when it can function by itself yet simultaneously enhance the larger tapestry of the ongoing series unfolding around it.

Santolouco’s art is a masterpiece and I’m psyched to hear he’ll be taking up the reins on the ongoing very soon.  There’s so much kinetic energy on the page even when characters are supposed to be standing in static poses (Karai and Alopex side-by-side on page 12 look fantastic).  I think “Secret History” offers the best fight scenes in the IDW-verse so far and I suppose my only grievance is that Casey never gets any good licks in.  April, on the other hand, gets the best-looking punch in the whole miniseries on page 8.  Yow.

I really can’t say enough good things about “Secret History” as a storyline.  I think it would make a great gateway into the IDW TMNT series for curious fans and might even be a better introductory point than the opening “Change is Constant” story arc.  It provides a lot of superb action and world-building that’s sure to entice newcomers to dive in and learn more.

Grade: A (as in, “Although this whole time I thought the Foot ninja that Splinter scarred in the eye in issue #2 was Shredder. So I was wrong! Sue me”.)
Posted by TMNT Entity at 8:40 PM