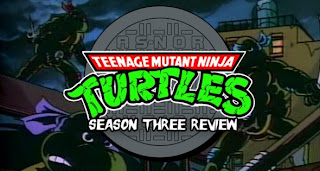 Only two more of these to go and I'll be done with season 3!  Which means I won't even be halfway through the entire series!  Huh.  Well, that sucked the wind right outta me.

This was a great batch of episodes for recurring characters and toy promos.  Rat King and Leatherhead throw down, Metalhead makes his debut, Don Turtelli returns, Agatha Marbles has her first appearance (lame) and, of course, both Usagi Yojimbo guest appearances!

All that and the Flush-o-Matic torture toilet playset.  Probably the most amusing bunch of season 3 episodes I've gotten to look at, yet.