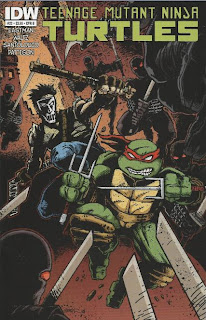 At Foot HQ, Shredder confers with Kitsune.  He tells her that ever since Victor took command of the Savate (a rival ninja crime syndicate operating in New York), he has proven to be a brazen and coordinated foe to the Foot Clan.  Shredder feels now is the time to strike.

Outside the Skara Brae, Casey is keeping tabs on his father (who is getting loaded), much to Raph’s impatience.  As they walk away, they’re ambushed by several Foot Soldiers.  The Foot Soldiers take them down, tie them up and throw them into separate vans.  As Karai discusses her plans to take their captives to the docks, Raph breaks his bonds and escapes from the van.  Karai remarks to herself that all is going according to plan. 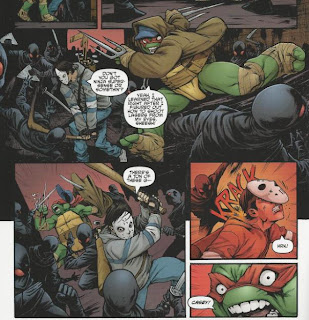 Down in the church lair, Splinter gives Leo a tutorial in the katsugi men technique while Don shows off his new security system to April.  He felt encouraged to up their security ever since Slash attacked (with Mikey reminding him of Hob and the Mousers’ attack on the old lair).  Raph suddenly arrives in absolute distress, telling them about the ambush and Casey being taken to the docks.  Leo recognizes it as a trap and recommends they form a strategy.  Raph wants to go immediately, but before the pair can fight, Splinter breaks it up and tells them that they will form their strategy on the way to the harbor.

At the docks, Karai and Alopex are guarding the bound and gagged Casey.  Karai has the entire area surrounded by Foot Soldiers and expects the trap to be sprung without incident.

April pulls up in her van and the Turtles and Splinter deploy (with April staying behind to man the getaway vehicle).  As they exit the van, Angel (finishing her shift at the Skara Brae) catches a glimpse of them.  Splinter, Raph and Leo take a vantage point on the rooftops while Mike and Don swim around and prepare to make a surprise attack via the water.  Surprises are indeed in store, though, as the Shredder enters the scene and approaches Casey.

Back at the van, Angel asks April what’s going on.  Angel gets the story and rushes to the docks to help save Casey. 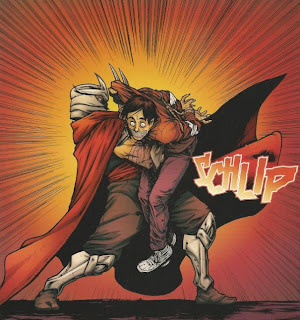 Shredder calls out Splinter, warning him what will happen if he remains hidden.  Not in the mood to waste time, Shredder stabs Casey in the stomach with his gauntlet.  Raph explodes in a rage and attacks (Splinter and Leo following behind).  All the Foot Soldiers leap from their positions and a massive brawl ensues.  Mike and Don climb from the water and try to get to Casey, but they’re blocked by the Shredder.  As Raph and Splinter deal with the Foot Soldiers, Leo is tackled by Alopex.  Angel manages to sneak in and drag Casey away from the action.  Seeing this, Splinter calls for his sons to retreat.  Shredder allows Don and Mikey to escape, but as Leo makes a break for it, Karai tags him in the back of the neck with a poison dart.  The Foot then grab Leo and disappear with him. As Angel loads Casey into the van and Splinter insists they get him to a hospital immediately, Don notices that Leo is missing.

*Victor took command of the Savate in TMNT Annual 2012.

*On page 8, Mike can be seen reading a copy of After the Fire, a comic by Tom Waltz and Guiu Vilanova.

*The TMNT: Deviations #1 one-shot tells an alternate universe story spinning out of this issue's events.

*This issue was originally published with 5 variant covers: Cover A by Santolouco, Cover B by Eastman and Pattison, Cover RIA by Declan Shalvey and Nolan Wooward, Cover RIB by Eastman, and Cover RE Phantom Exclusive by Rich Woodall.

Editor Bobby Curnow needs to nail Santolouco’s feet to the floor so he can’t run away.  That guy must stay on this book for a good long while.  To put it mildly: He’s incredible.

But before I embarrass myself by gushing over Santolouco’s art for the bazillionth time, let me address the story.

After the prologue last issue, “City Fall” gets its proper start here (and I think it’s the first issue of the ongoing to actually be titled within the pages).  If “Krang War” was the payoff for all the outer space stuff that has been going on in this book since it began, then “City Fall” by all indicators looks to be the payoff for everything else.  Just look at those Turtle Tips up there.  Waltz is pulling in plot points from basically every arc and major micro/mini series since he started this book.  I admit, the onslaught of story points coming to fruition might be a little rough on newcomers, but those of us who have been reading (and paying attention) since the beginning are getting our much anticipated reward.

But that’s not to dismiss “City Fall” as impenetrable to the uninitiated, either.  In fact, it strikes me as a pretty good jumping-on point in its own way.  There’s enough exposition (some graceful, some not so much) in here to keep first timers from being too confused and even if they don’t follow all at once, hey, the art and action is incredible!  So there’s that to keep you entertained, whether you get all the references or not.

Heck, when I was a kid, there was no such thing as a “jumping on point”; that seems to be a more modern invention.  If you woke up one Wednesday and decided you wanted to read X-Men, you grabbed the first issue you could find off the rack at 7-11 and figured it out from there (and we didn’t even have the internet to help us out, dagnabbit!).  I started reading Spider-Man during the Clone Saga.  The Clone Saga.  If I can make it through that, I figure most folks can deal with the multitude of colliding story arcs in “City Fall”.

If you look back at my earlier reviews from around the first year of the series, a lingering criticism I had was that important enemies, when first encountering the Turtles, tended to go down rather easy.  Leo fought off an army of Foot Soldiers singlehandedly in their first encounter.  When the Turtles and the Shredder first threw down, they used the magic of teamwork to beat him in two pages.  When the Savate ninja gang finally got a major spotlight, they were played more for comedy than as a threat.  I think “Blood Brothers” marked the real beginning of threats that truly challenged the Turtles and tested their mettle, with “Krang War” and “Secret History of the Foot Clan” only increasing the difficulty from there.

“City Fall”, going just by this first issue, may redeem some of those enemies who might have fallen short of expectations on their first go-around with the TMNT.  The Foot Soldiers, previously introduced as cannon fodder, take out Casey and Raph with a rather small unit.  The Savate, who were sort of the butt of jokes when we last saw them, are now a thorn in the Foot Clan’s side.  Then there’s the Shredder, using the loved ones of Yoshi’s children just to draw his enemy out.  What I appreciate most about that scene isn’t the violence but how it ties into Shredder’s words at the start of the issue.  He is through with patience and biding.  He called to Yoshi once.  Yoshi didn’t respond.  So Shredder straight up stabbed Casey.  He’s not screwing around or playing games (like at the start of the series when he masqueraded as a Foot Soldier to test Leo).  He’s ready to put it all on the table.

And speaking of Casey’s stabbing, it was a moment that made me grateful for the “PG-13” nature of this book.  The focus isn’t on the gore or what have you, but on the action-itself and what it represents.  Not just the suspense regarding Casey’s survival, but everything I mentioned above about Shredder having zero patience for playing games.  If Santolouco had drawn Shredder pulling out Casey’s organs and a massive pool of blood and gore, it would have distracted from the other purpose of that scene, putting too much emphasis on the injury.  It was done “tastefully” and was more than just violence for violence’s sake, at least from my perspective (it wasn’t meaningless and gratuitous, is what I’m saying).

There’s a great sense of suspense, confusion and tension building up over the course of this issue.  It begins with the conflict of wanting to rescue Casey, but needing time to think things through.  When Shredder calls Yoshi out, they try to take time to weigh their options and that backfires horribly.  By the end, Casey is dying, Leo is missing and our heroes are left with a very limited window of opportunity to figure out what to do next.  There's essentially a singular dilemma in this issue, only gradually dialed up one notch at a time until the cliffhanger.

I said at the start of the review that I would gush about Santolouco’s art, but I think I did enough of that during my review for “Secret History of the Foot Clan”.  I’ll just settle on saying that this work is as excellent as “Secret History” and I really hope IDW keeps him on past “City Fall”.

We’re getting off to a great start, here.