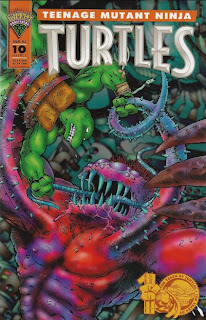 At the apartment, Casey gets off the phone with his mother, telling her about the break-in he, April and Shadow came home to the previous day.  There’s a knock on the door and it’s Lou Braunze.  He asks to see Casey in private, as he has some news.

They go for a walk and Braunze tells Casey that he’s the one who scared off the burglars yesterday, except they weren’t burglars but government agents.  Braunze tells Casey about DARPA (Defense and Research Projects Administration), a covert branch of the CIA that works outside of government approval and oversight.  He goes on to say that DARPA has Raphael and that they’re keeping him in their Nevada research facility.  He tells Casey to gather all his friends who can help so that they can free Raph. 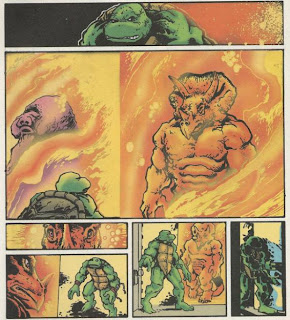 At the DARPA lab, Raph wakes up strapped to a table.  He breaks the straps and stumbles off.  Injured, he hobbles into a room where several aliens are being held in stasis tubes.  One of the aliens, a Triceraton, awakens and seems to recognize Raph.  Suddenly, Raph is attacked by a toothy, tentacled alien.  He’s in no condition to fight back, but the noise attracts several guards who proceed to tranq him and the alien. 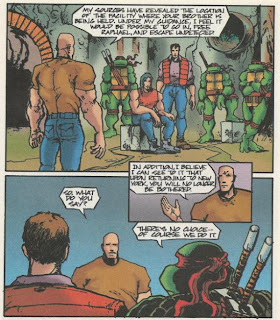 Down in the sewers, Braunze tells his story to Leo, Don, Mike and Nobody.  Don doesn’t trust him and wants to know what his connection to DARPA is.  Braunze concedes, explaining that back in the ‘50s, he was one of 18 people that volunteered to undergo mental enhancements at DARPA.  Many of the participants died, but he was one of the few who successfully gained mental powers.  In his case, he can read minds and shape the thoughts of others so that they believe whatever he tells them.  He used the latter power to escape DARPA by making everyone think he was dead.  With no other choice, the Turtles, Nobody and Casey agree to follow Braunze to Nevada. 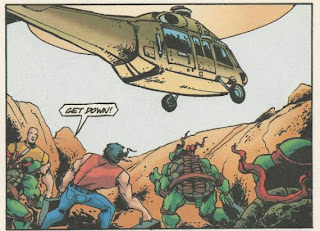 Three days later, they arrive in Lincoln County, Nevada by van.  Hiding their getaway vehicle, they proceed on foot.  A helicopter flies overhead, but it hasn’t seen them.  The DARPA guards are shooing away a pair of observers trying to catch a glimpse of something unusual at the nearby DARPA facility.  Laying low, Leo thinks the observers may just get their chance.

*This issue was 8 months late, apparently.

So, the DARPA arc begins.  I have mixed feelings about this one, most of which I’ll get to when it’s relevant (their treatment of Casey and Nobody, for instance).  While it ties into everything that’s been going on since Volume 2 began (the dreams, Baxter’s whereabouts, etc.), the setup in this issue felt very rushed and convenient.

So the guy living in April’s apartment building just happened to have once worked for a covert branch of the CIA which happened to be the same covert branch of the CIA that kidnapped Raph?  And when he goes and tells all this to Casey, the Turtles and Nobody, they just believe him immediately (except Don)?  I guess arguments could be made that Braunze used his mental powers to calm the others and keep them from disbelieving or getting volatile (though Don seemed immune, maybe because he’s smarter), but jeez, doesn’t it all just seem rather lucky?

Braunze, as a character, has no personality or charisma.  He’s used as a tool in this volume to facilitate the conclusion and get the Turtles where they need to be.  He isn’t interesting and I couldn’t tell you a damn thing about him other than the fact that he’s bald and can read minds (but isn’t stuck in a wheelchair like that other guy).  Braunze is sort of the start of a trend you’ll notice in Vol. 4: Bland characterization.  In Mirage’s (Laird’s) never ending quest to make characters feel more “real”, what we wind up with is a whole bunch of really, really boring guys that all talk with the same verbal tics (“Ummmm”, “Hmmmm,” “Mmmm,”) and mumble about dull bullshit all the time.  Having a unique power (telepathy) isn’t the same thing as having a unique personality.  Making a character bland doesn’t make them more “real”, it just makes them boring.

Granted, I’m getting ahead of myself here, as that’s more an epidemic that’ll plague Volume 4, but Braunze really is the beginning of it.  You can also see it creep into pre-established characters, too.  Whatever happened to Nobody being the Batman-esque vigilante loon?  All he does now is stand around and go “Hmmmm,” or “Ummm,” or “Mmmm”.  April?  She sits around reading magazines, now.  And all her dialogue starts with “Hmmmm” or “Ummm” because if you can’t tell that shtick REALLY annoys the hell out of me.

I guess that’s one of the other reasons why I dislike this arc.  The “new trend” of Mirage’s TMNT writing starts to stick out around here.  I’m sure it was there back when the volume began, but 10 issues in, you really start to notice it.  It’s not to say that there aren’t elements of the DARPA arc that I like (great throwbacks to the outer space adventure arc of Volume 1), but it’s full of problems and the volume starts to fall apart during it.

Grade: C- (as in, “Could the book suddenly starting to suck have anything to do with the 8 month delay between issues?  Because they sure weren’t using the extra time to polish the artwork; this is some rough stuff by Lawson”.)
Posted by TMNT Entity at 11:07 AM