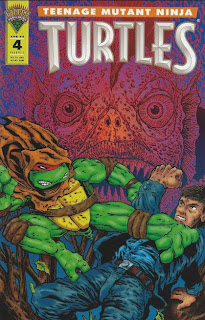 At the bottom of the ocean, Baxter Stockman (in his new robot body) plots his course back to the Northeast.  He runs afoul of a submarine, which nearly dices him up in its propeller.  Baxter avoids the damage, remarking that he’s come too far to be stopped now. 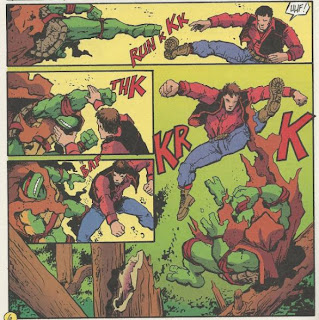 Up in Northampton, Officer Longer stakes out the farmhouse with a telescope.  He’s suddenly attacked by Donatello and the two fight.  Longer gives up and reveals that he and Donatello have met before.  Don suddenly recognizes him as Nobody.  Nobody says that he’s transferred from the Springfield police force to Northampton and that he was the cop that stopped by the farmhouse a few weeks ago.  Nobody explains that he recognized the owner’s name, Arnold Casey Jones, and figured that if he stuck around long enough he’d eventually encounter one of the Turtles.  Donatello invites him back to the farmhouse to catch up. 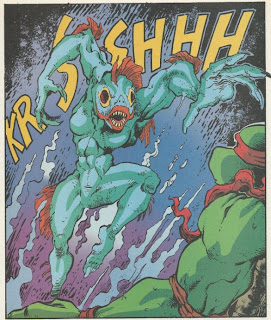 Down in the sewers below New York, Leo is doing some exploring.  He traverses some long forgotten tunnels, eventually finding a hidden subterranean lake.  He’s suddenly attacked by a fish-woman, who takes him by surprises and knocks him unconscious.

Leo awakes a little while later, glued to an arch above the lake by some sticky substance.  He looks below and sees a large beak protruding from the water; some humongous predator is down there.  The arch suddenly gives way and Leo falls into the lake.  Underwater, he’s attacked by a gigantic turtle.  Leo cuts out its left eye and escapes on land.  The turtle gives chase into a tunnel.  Leo chops down one of the support beams and the tunnel collapses, burying and killing the giant turtle. 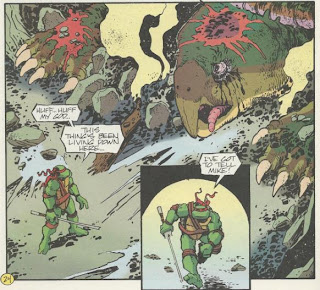 Leo can’t wait to get back home and tell Mike, but his path is blocked by the angry fish-woman.

*The fish people last appeared in TMNT (Vol. 1) #28, where they were believed to have gone extinct.

*A possible origin for the giant turtle will be given in Tales of the TMNT (Vol. 2) #18.

*This issue also contained a bonus story, “Of Muck and Men, part 1 of 2” by Ryan Brown, Matt Roach, Frank Moreno and Tim Toffoli.

Well, that was pretty fuckin’ random, wasn’t it?

Three issues of the Turtles introspectively pondering their own futures and if life has any meaning if they all split up and then BAM!  Giant killer turtle out to eat Leo.

The fish-woman and giant turtle arc is one of the weirder parts of Volume 2.  Honestly, it doesn’t serve much of a purpose but to give the TMNT something to do while they’re waiting for Baxter to get from Nevada to New York.  Unlike the Baxter and DARPA arcs in this volume, there was no foreshadowing to the fish-woman and the giant turtle.  They just show up, there’s a fight and then they vanish just as quickly with no lingering aftermath.  The plot line always left me a little cold.

Unfortunately, if the arc serves to accomplish anything, it’s to undermine the somber conclusion to Steve Murphy’s “Sons of the Silent Age”.  The whole purpose of that story was that the last female of the fish-people passed away and that meant their entire race was doomed to extinction.  Now we know that more exist, and a female no less, softening the blow of one of the best TMNT stories ever written.  “Sons of the Silent Age” was a beautiful tale and a well that never should have been revisited.  Especially not for the sake of some crude and random action included to help the book spin its wheels until the REAL plot makes it to the party.

Also, Nobody comes back.  We find out he was the cop from last issue and now we finally know his name.  The Mirage book was never too hot when it came to regular recurring characters and Nobody got more appearances than most others.  Volume 2 allowed us to get to know him a bit better, which is probably why what happens to him at the end pissed so many fans off.  But I’ll get to that when the time comes.

Granted, most TMNT stories rely on unconvincing coincidences to facilitate the adventure (right place at the right time, etc), but man, you have to string a LOT of them together to get Nobody in on this.