The theme for this Awesome Turtle Pictures is "separate characters pitched to Playmates who were then fused together into a single character who made it to production".  Oddly specific, I know. 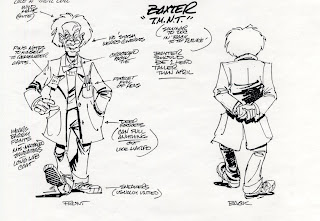 Here's a Baxter Stockman concept credited to Steve Murphy with either Ryan Brown or Steve Lavigne on artwork.  It's for the Caucasian Baxter of the Fred Wolf cartoon (obviously).  Notice how his design specifically draws attention to his visual similarity to Doc Brown from "Back to the Future"?  My other favorite note is that he would have had the ability to yank anything out of his deep pockets in a manner similar to Harpo Marx (possibly another influence on Baxter's crazy hair).  How exactly that sort of gimmick would have worked in toy-form, I've no clue. 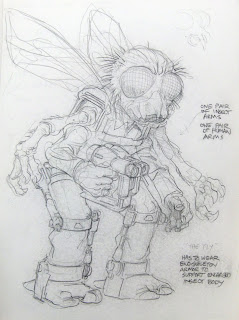 Here's concept art for a character dubbed only "The Fly" by Peter Laird.  He's described as being an enlarged insect and having to wear an exoskeleton to support his body.  For whatever reason, the two characters of Baxter Stockman and the Fly got fused together (how appropriate) and became the Baxter-Fly we recognize.  A shame we never got a "normal" Baxter Stockman toy out of Playmates, but the Baxter-Fly toy was pretty cool, regardless. 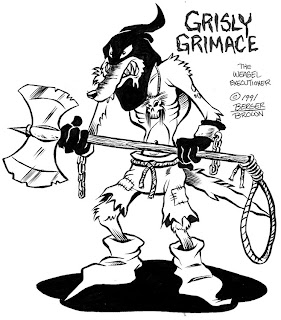 Looks like the idea for an evil mutant executioner working for the villains was tossed around quite a bit in '91.  "Grisly Grimace" here is a mutant weasel created by Dan Berger and Ryan Brown.  While the weasel idea wouldn't make it into a toy, the executioner idea would survive... 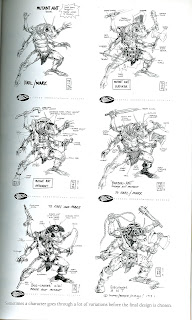 The cleverly named "Mutant Ant" designs here are by Michael Dooney and Dan Berger.  As you can see by that last one, they also included an executioner (as well as a gladiator, a space man, a barbarian, a pirate and a no-frills mutant animal).  The executioner ant would win and become Antrax, Krang's personal executioner from Dimension X who received a Playmates toy and a one-off appearance in the Fred Wolf cartoon (in the episode "Night of the Rogues").