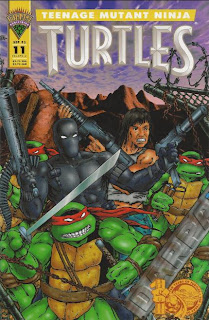 Outside the DARPA facility, Don and Nobody do some recon and realize that there’s no way to sneak in without being spotted.  Braunze formulates a plan and psychically brainwashes Casey into thinking that he’s the greatest assault team leader in the world.  Casey interprets this as “Arnold Schwarzenegger” and fearlessly attacks and crashes a DARPA truck, knocking out the drivers (all whilst talking with an Austrian accent). 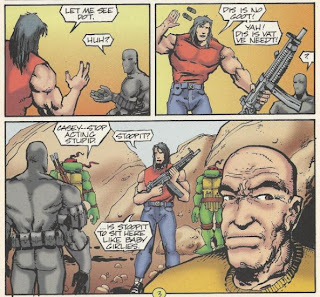 They gun it toward the facility, but the guards are already aware of their presence and send choppers to shoot them.  Nobody crashes the chopper with his bazooka while Casey drives the van straight through a fence and into a garage.  As Mike seals the garage, Nobody shoots all the guards inside.  Casey then hops onto a motorcycle and drives it through a door and down a guarded hallway.  He jumps off the bike, letting it crash into the guards, then shoots the gas tank with his assault rifle.  The bike explodes, killing the guards. 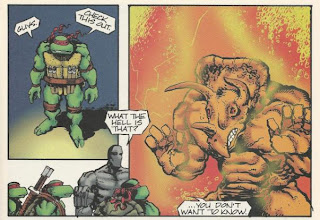 Braunze then leads them to the lab where many aliens are being stored in kryo-tubes.  Braunze recognizes an old friend (a purple alien with a flat head) and frees him from the tube.  The Turtles recognize a familiar face, too: a Triceraton.  Seeing them, the Triceraton awakens and smashes through his tube.  The purple alien suggests the Triceraton set aside old grudges and work with the Turtles to escape.  The Triceraton agrees.  They then free a third alien (a Chinarian) and make their way to some of the other labs on the sub levels.

When they reach engineering, the purple alien suggests that they don’t touch anything, as all the tech has been salvaged from alien spacecraft and is dangerous.  Secretly, the Triceraton spots his sub-space homing beacon and checks to see if it’s still operational.  Much to his surprise, it’s already been activated.

*The Triceraton was last seen in TMNT (Vol. 1) #7, when the TCRI building was destroyed by the Utrom transmat and he was left behind on Earth.

Ugh.  Here we go.  The point where Volume 2 completely lost me.

The assault on DARPA, by all rights, should be a very exciting story arc.  The events had been seeded since Volume 2 began and it even offers a nostalgic throwback to the original outer space adventure from Volume 1.  There’s also a healthy number of supporting characters and plenty of action.

Unfortunately, the way Lawson realizes the storyline is just not to my liking.  My first grievance is with the treatment of Casey.  The idea that he’s so worthless he has to be brainwashed into being brave and reckless is just a load of crap.  For one thing, being brave and reckless is Casey’s forte’.  And secondly, I hate stories that regard him as a liability, so far beneath the Turtles (or Nobody or Braunze) that his weight either has to be carried or he has to be “fixed” in order not to be a fuckup.  That’s the way he was handled in the 4Kids cartoon and I absolutely despised it.  In this story, he’s designated the weak link and Braunze has to turn him into a completely different person in order to make him useful.

And boy, the Turtles, Nobody and Casey sure do kill a lot of people in this one.  I have to wonder just how “evil” these DARPA guards are.  They’re working for the Government, so they’re US soldiers.  Are they all aware of the sinister machinations going on in the base, or are they just carrying out dreary sentry assignments with no clue of the depraved classified activities occurring underground?  I’m leaning toward the latter scenario.  While our heroes have every right to want to storm the base and save their brother, they’re doing it at the expense of the lives of people with no clue what’s going on.

Incidentally, if all this seems just a little familiar to you, then congratulations: You read TMNT Adventures #60 a year ago.  Published in September, 1994, that issue featured the Turtles storming Area 51 to save Future-Donatello and (contemporary) Raphael, teaming up with other aliens captured in the facility to do it.  And guess what?  That issue wasn’t very good, either.

Lawson’s art looks really rushed again, as characters and their proportions fluctuate madly from panel to panel.  The panel on page 13 of Casey holding the machine gun is absolutely ridiculous looking.

Sadly, the DARPA arc is only going to get worse, at least in its flippant treatment of (non Turtle) characters, anyway. 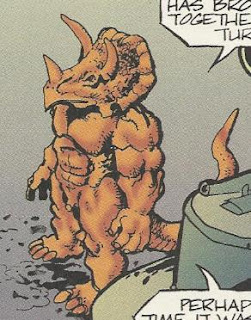