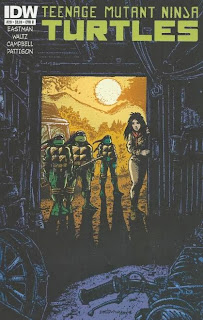 As they pull onto a dirt road in the van, April and Casey discuss how things have been going.  Casey feels he’s getting better now that Don’s re-sewn his stitches and April thinks all their wounds can heal if they just keep out of New York City for a while.  Driving up to a barn on April’s old family farm, they wake the Turtles and tell them they’ve arrived at their temporary digs.

April explains that the farm has been in her family for years and that her parents moved there from Albany after her dad had his stroke.  Although the Turtles will have to lay low and can’t go near the farmhouse, they can stay in the barn until they’ve healed.  Raph tries to help Leo out of the van, but Leo freaks out.  He’s still having trouble getting over the mindbending the Shredder put him through as Dark Leo. 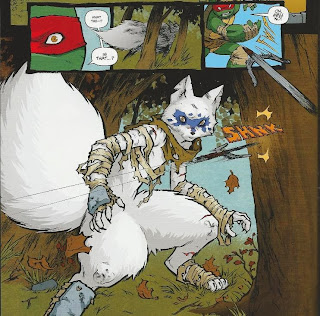 Raph notices movement in the nearby brush and pounces.  It’s Alopex, who insists that she isn’t looking for a fight.  Raph is about ready to throttle her when Leo violently stops him, exclaiming that Alopex is telling the truth.  Raph thinks that Leo only wants to protect her because of his residual Foot Clan brainwashing and the two begin fighting.  Splinter breaks them up and reminds them that Alopex saved him during his fight with the Shredder.  Alopex describes how the Shredder killed her family and that’s why she rebelled.  Knowing she had to leave the city as well, she hitched a ride on the roof of their van.

Raph says she’s lying again, as she’d fibbed about her history before.  Leo backs her up and the fight starts all over again.  Splinter breaks them up once more, except this time Leo tells “Yoshi” not to boss him around, as he is not his sensei, and storms off.  Alopex claims she was only looking for a ride, not help, and also storms off. 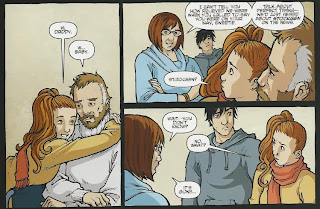 April and Casey drive up to the farmhouse and April introduces her boyfriend to her mom (Elizabeth).  Mrs. O'Neil invites them in so they can catch up with Mr. O'Neil (John).  April’s dad has been wheelchair-bound since his stroke, but Mrs. O'Neil promises that he’s getting a little better every day.  Mr. O'Neil is happy to meet Casey and is especially relieved to see his daughter, as he was afraid something might have happened to her after the explosion at Stockgen.  April hadn’t heard and asks to be filled in on the news.

After putting her husband to bed, April’s mom comes downstairs to talk to April about Stockgen (April’s dad had gotten her the internship there).  April says that she left Stockgen because she was suspicious that they were involved in illegal activity and offhandedly mentions “ooze”.  April’s mom reacts to the choice word and then tells April she has Startling Revelations about her Mysterious Past that will most assuredly Blow Her Mind. 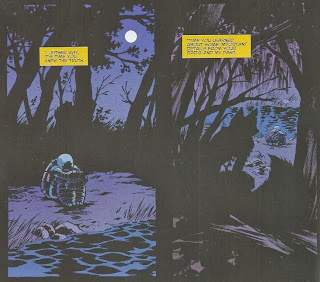 Out in the woods, after dark, Leo sits near the lake and struggles with the images in his head.  He tries to seek answers from the spirit of Tang Shen, but is confused.  From the brush, Alopex silently watches him.

*In the Mirage comics (and 4Kids cartoon), it was Casey’s family who owned the farmhouse in Northampton.  April’s family owning it DOES have precedence in at least one previous incarnation, however: The first live-action TMNT movie.

*This issue was originally published with 3 variant covers: Cover A by Campbell, Cover B by Eastman and Pattison, and Cover RI by Michael Dialynas.

The exile to Northampton is like the “Death of Gwen Stacy” for the TMNT franchise.  By that, I mean it’s that one big moment, that story so popular and important to the narrative and growth of the characters that practically every adaptation and reboot of the Ninja Turtles has wanted to do a version of it.  While the specifics don’t always line up, the basics remain the same: The Turtles get completely wrecked in a battle with the Foot Clan, one of them is seriously injured and they have to escape by the skin of their teeth to Northampton so they can lick their wounds and regroup for the comeback.

I think this is the fourth time we’ve done this song and dance, but as with Peter Parker’s love interest getting chucked off a bridge, it really IS a grand bit of storytelling that invites lots of pathos and introspection and serves as a gargantuan milestone for the narrative.  So even though we’ve been through this all before, it’s one of those moments in TMNT history we’re likely going to see many times more as the franchise reinvents itself.  And it isn’t so much that every incarnation wants to put their own spin on the moment, it’s whether or not they get the most out of it and make it count that we should be concerned with.

As I mentioned in the previous couple of reviews, the Turtles were basically becoming lost in the overflow of storylines in their ongoing series; reduced more to being tools to get the plot moving than individual characters who grow and change.  This “Northampton” arc looks to finally slow things down so we can get to know them again.  I’m really hoping it pays off and we get to spend some quality time with each member of the team.  Jeezuss, I hope this doesn’t turn into “The Emo Leo Show” and we wind up with four issues of a pouty Leo struggling with his feelings.  But that’s just me being a pessimistic twerp; I’m sorry.

Waltz (and Eastman and Curnow) are already doing things a little differently, not just with the owner of the farm, but the fact that it’s still in use by their family and it can’t serve as a glorified vacation resort for the Turtles (they’ve still got to hide).  It also looks like we’ll get to know April’s family a little bit, too, and that’s hardly ever happened before beyond Robyn and a very different version of her father in the Nick cartoon (he's named Kirby, not John, in that universe).  The ending narration from Mrs. O’Neil is sooooo stilted and melodramatic, awkwardly stretching out to fill a two-page montage.  Can you imagine if your parents started talking to you like that?

Well, we ARE just getting to know Mrs. O’Neil.  Maybe April’s mom is just a drama queen?

The big surprise was Alopex tagging along.  I guess someone’s about to pull a Ninjara.  Though isn’t it funny how in the past, when Alopex was a villain and a member of the Foot, she was drawn to look ferocious and bestial and terrifying, but now that she’s indifferent/friendly with the protagonists, suddenly she looks totally adorable?  “Artist’s interpretation”, I know, but it is kind of weird to jump from Santolouco’s snarling “rip your throat out” escapee from The Howling directly into Campbell’s soulful-eyed “awwww wook at her widdle nose” fluffball, right at the point in the narrative when she seemingly switches sides.

I like her parachute pants, though.  Girl is set to pop ‘n lock.

Ross Campbell has been one of my faves in regards to IDW’s roster of artistic talent, but so far they’ve only busted him out on “special occasions”.  It’ll be great to see him handle a full-fledged arc.  My above cajoling about the cuteness of Alopex was really just me taking the piss; ALL of Ross Campbell’s characters look cuter than any other artist portrays them.  It’s just his style and I think it actually works in terms of transitioning from adorableness directly into bone-crunching action; really keeps you off guard.  This was a breather issue, so there isn’t a lot of action to speak of, though I did like the juvenile wrestling between Raph and Leo as they argue over Alopex’s allegiance.  He didn’t overdo it on the layouts and captured the moment quite well.

Overall, despite the sense of déjà vu, I’m not really bugged by seeing the exile to Northampton yet again.  I think it’s what comes after this moment that’ll really make the difference.  Are we going to get this time to see the characters AS characters again?  Is Leo’s angst going to be insufferable or palatable?  Has Alopex actually changed?  Will April’s mom continue to talk like she’s constantly narrating a movie trailer?

I’m sure we’ll find out and I hope it pays off.

Grade: C+ (as in, “Cripes, I just don’t see how Alopex can be a master of stealth with a tail twice the size of her whole body.  Or maybe it isn’t normally that poofy and it’s just really humid in Northampton”.)
Posted by TMNT Entity at 7:22 PM