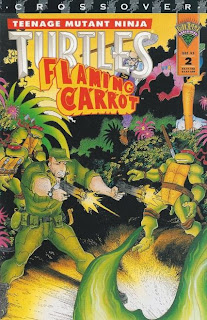 As the Flying Wing zooms over the TMNT’s camp, Mr. Furious suddenly loses power on all the instruments.  He order all the Mysterymen to bail save for himself, Flaming Carrot and Bondoman, who stay behind to manually work the wings.  Once they glide far enough away from the camp (and the ancient ruins) the instruments begin working again.  Mr. Furious sets the Flying Wing down and, after reconvening with the Spleen and the Zeke’s, they decide to hoof it toward the camp. 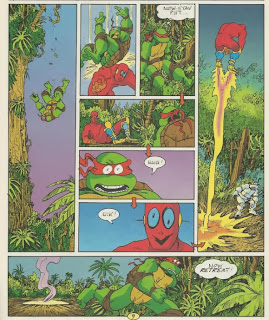 Meanwhile, the Turtles and Col. Blade are pretty spooked after the buzzing their camp received from the strange plane.  The Turtles split up and journey into the jungle to check things out.  Raph winds up getting into a tussle with the Shoveler, who proceeds to trick him into jumping off a cliff.  Raph lands right next to Screwball, who panics and flies away on his rocket-boots.

Elsewhere, Donatello has a run-in with the Mystic Hand, who scares him off with his flying, disembodied hands.  Star Shark rolls into camp and meets up with Col. Blade.  Recognizing the Colonel as an American soldier, the Mysteryman explains everything.  Raphael, meanwhile, has begun trailing another green flame-man.  The flame-man escapes, but leads him to the Flying Wing.  Mr. Furious and the Zeke’s are about to open fire when Flaming Carrot stops them.  He and Raphael know each other and the two trade information. 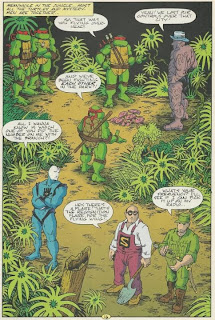 Back at camp, all the Mysterymen have been rounded up and both groups brought to speed.  The Shoveler, taking watch, sees activity off in the distance.  Mr. Furious concocts a way to draw all the little green flame-men toward them so they can deal with them all at once.  They set the area with traps and drive the Flying Wing and all its weapons near a clearing.  They then throw all their green flares into a bonfire, hoping to attract the flame-men.  Meanwhile, Flaming Carrot opens a lemonade stand to serve all the thirsty flame-men. 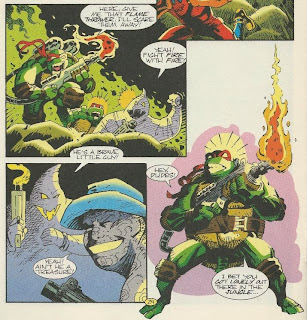 The plan works and the flame-men converge on the bonfire, creating a rainbow in the night with their weird energies.  Michelangelo tries to scare them off with a flamethrower, but finds that by feeding flame-men mass quantities of fire, they only get bigger.  Luckily, shooting the flame-men in the “heart” still causes them to snuff out and the giant is destroyed.

Col. Blade takes charge and hands out artillery to everyone, including the Turtles (Screwball, meanwhile, dresses like a character from McHale’s Navy because he’s just so silly).  However, it may not be enough as hundreds of flame-men storm the clearing with no signs of slowing down…

*Vokes was mistakenly not credited in this issue.

One of the anonymous comments for my review of last issue said that I pretty much repeated everything I wrote in my review for the first TMNT/Flaming Carrot crossover.  And you know what?  They were right.

The problem is that there’s so little new material worth discussing between these crossovers.  Burden’s style of humor is bland and repetitive, his characters are bland and interchangeable and his plot is bland and underdeveloped.  Bland bland bland.  It’s hard to muster up new and exciting ways to describe the same ole shit.

And this second installment in the miniseries is definitely the same ole shit.  Everyone is boring and all the jokes are excruciatingly tiresome and stupid.  Ha ha ha.  Flaming Carrot opened up a lemonade stand.  Ha ha ha.  McHale’s Navy was a show that existed.

Just about the only improvement worth noting in this issue is the changeover in art.  Lawson was kind of phoning it in and his economical style was looking rushed and dull (he was doing TMNT Volume 2 at the same time, so his plate was probably a little full).  There’s no energy to any of his panels, which makes reading the groan-worthy story all the more tedious.  But then suddenly in the last handful of pages Neil Vokes picks up the baton and there is a WILD shift in art styles.  No attempt is made to harmonize their incongruous aesthetic approaches, just BAM!  Vokes takes over.

And the story becomes much more palatable.  All the same stupid jokes and cardboard characters are there, but Vokes at least breathes some life into them with his manic and fluid pencils.  What had been a really sleepy “action” scene when Lawson began drawing it suddenly turns into something with energy and pizzazz when Vokes takes the reins.  Does it save the issue?  No, but it at least reduces the pain.

Luckily, Vokes stays on for the remainder of the miniseries, so we’ve at least got that to look forward to.

Grade: D (as in, “Does anybody in any of Burden’s comics have a fucking personality?  Do those exist in his universe?”)
Posted by TMNT Entity at 10:05 AM