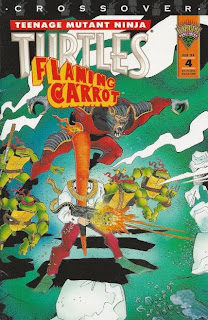 Mr. Furious dukes it out with the alien werewolf only for the beast to back off once it sees his Free Masonry ring.  Being a Mason itself, the werewolf runs away.  The Mysterymen, the Turtles and Col. Blade eventually catch back up and ask Mr. Furious what the deal with the werewolf is.

Back at the Flying Wing, the Spleen, Bondoman and Mystic Hand are under siege from the spectral figures.  The spirits are blasting beams of ice at them, encasing the jet.  The Mysterymen flee into the jungle with the specters close behind. 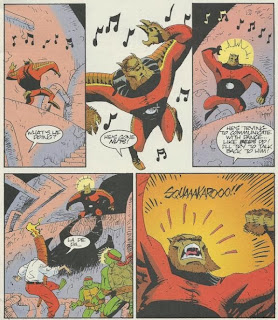 At the ruins, the werewolf is desperately trying to communicate with the team via dance, but they can’t interpret him.  Don, Leo, Screwball and the flame-creature Sykes show up.  After a brief bit of exposition, Sykes has a chat with the werewolf in its native language.  The werewolf then devours Sykes and collapses.  Star Shark comes down from his lookout post and tells everyone that the Flying Wing is under attack.  Leaving the werewolf behind, the Turtles and the Mysterymen return to camp.

They reach the Flying Wing, but have no idea what happened.  The werewolf then catches up with them and explains everything… in English!  He says his name is Chontre Mac and he’s an alien from a planet that exists within the center of the Sun.  He says that there are a diverse number of races from that planet and all have the ability to absorb the minds of those they devour (hence how he was able to learn English by eating the flame-creature that ate Sykes).  Chontre says that long ago, his people came down to Earth to set up a colony and built this great city.  However, civil war erupted and most of his people retreated back to the Sun.  Chontre was chosen to sink the city deep into the Earth so that its technology and culture could be preserved, putting himself in cryogenic stasis so he could keep watch.

Chontre is happy to be awake again and, seeing that there are no more warring Sun people on Earth, feels that now is the time to share the technology of the lost city with humanity.  Suddenly, Mystic Hand’s disembodied hands float over and motion everyone into the jungle.  They find Mystic Hand and Bondoman frozen in cryogenic ice (which Chontre assures them will defrost to no ill effect in a day or two).  The Spleen, who fainted, wakes up and describes the ice-blasting specters.  Chontre says that the specters are the Eikers, the faction who incited the civil war.  When the city was unearthed, it sent a signal into space.  Responding to it, the Eikers traveled down from the Sun to regain the lost technology and invade the Earth.  The electromagnetic beam that has been shutting off all technology on Earth was a homing beam from their mother ship.  Chontre explains that the only way to stop the invasion is to re-sink the city so the Eikers have nothing to home in on. 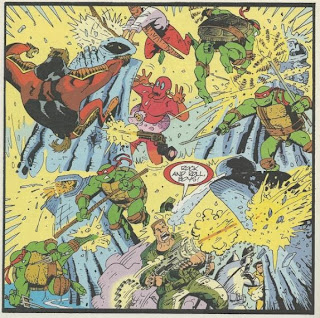 Screwball then calls down from his lookout post that the Eikers are coming.  Chontre says that they’re an early scout patrol.  He urges the Mysterymen and the Turtles to lead the aliens to the nearby river where the additional humidity will react with their freezing powers and force them to take tangible form.  The plan works and with the Eikers finally solid, Col. Blade is able to kill them all with machinegun fire.

Chontre leads Col. Blade, the Professor and Mr. Furious back into the main hub of the ruined city where they found him in cryo-sleep.  Chontre mans the controls to re-sink the city, telling the others to leave so they don’t become trapped, too.  The controls malfunction and Chontre laments that the only way to re-sink the city now is for two individuals to man separate emergency controls simultaneously.  The Professor volunteers to stay behind, jumping at the chance to go into suspended animation and awaken centuries from now in a brave new world. 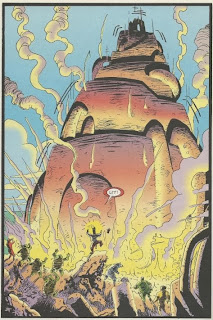 Blade and Furious escape the building just as it and the rest of the city sink back into the Earth.  Everyone’s electronics begin working again, proving that the Eikers have lost the signal and retreated from their invasion.  Col. Blade gives a salute, praising the selfless sacrifice of the Professor.

*This story is continued from TMNT/Flaming Carrot Crossover #3.

*The Turtles will meet Flaming Carrot again (or appear in the same crowd as him, anyway) in Savage Dragon #41.

When it comes to Burden’s style of writing, it’s always a mystery as to what will be important to the plot and what is just a dumb throwaway joke.  Last issue, they made a big deal about Screwball’s pet shoelace Sherman surviving the fire-creature attack, but Sherman never appears again.  The Zeke’s mentions that the protoplasmic goop left behind by the extinguished fire-creatures smelled like Corn Flakes… an aside which proved to be foreshadowing once we learned that the fire-creatures were fused with the I-Team and the Zeke’s was in fact smelling what the I-Team had eaten before they in turn were eaten by the fire-creatures.  And in this issue, Mr. Furious and Chontre both share Free Masonry rings, which ends their battle as soon as it starts, but no further value is ever attributed to that connection.

It’s… just a mess.  I guess you could say it “keeps you on your toes”, as you never know which random asides will pay off in the end and which will go nowhere, but more often than not it all just amounts to a bunch of pointless references and droll gags.  I’m guessing the Free Masons were supposed to have been descended from the Sun people’s lost civilization?  That seems the likeliest explanation, but the connection is never solidified and considering all the other random bullshit going on in this miniseries, it could just as easily have been another stupid attempt at silly humor (like Chontre trying to communicate via dance).

The miniseries never knows what tone it wants to strike and it becomes really difficult to invest in anything.  When the characters are capable of cartoonishly pulling lemonade stands out of thin air, it’s hard to take any suspense in the action seriously because the surrounding scenes are so silly and absurd.  The ending wants us to feel the drama of the Professor’s sacrifice, but how can we when, again, everything else has been so goofy and self-aware?  It’s a tone deaf comic in terms of mood.

I’ll bring it up again, but I just don’t see why this miniseries begged to include the Ninja Turtles at all.  By this concluding chapter, they’ve become nothing more than crowd-filling bodies.  They contribute nothing to the resolution and scarcely offer any dialogue (or, at least, any dialogue that sounds unique to them).  For the umpteenth time, I’ll repeat that the Turtles could have been substituted by any other four members of the Mysterymen and it wouldn’t have changed this comic one little bit.  Hell, the cast was already bloated so much that you could remove the Turtles entirely and it would make no difference.  They are entirely superfluous to everything going on around them and are more like baggage than characters.

To be frank, Mirage’s offshoot material released to supplement their various ongoings were never very strong; lots of goofy oneshot Specials and the occasional miniseries for the Hell of it.  Turtle Soup and Plastron Café are probably the only limited series that are worth a look, and being anthologies, even those are dicey in their content.  This Flaming Carrot crossover is just another in that long tradition of “why did they even bother?”  Burden doesn’t make the most of his opportunity to work with the Turtles and the whole thing just leaves me feeling cold.  Vokes’s artwork is the only positive angle to this entire endeavor, but even he can’t salvage it.

Grade: F (as in, “Flaming Carrot… such a dull, lifeless, uninteresting character, Hollywood didn’t even include him in the movie based on his own fucking comics”.)
Posted by TMNT Entity at 7:33 PM