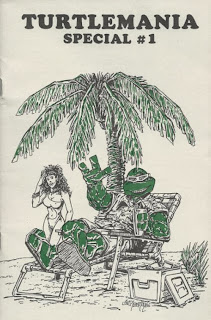 *Turtletalk (A brief history of Eastman, Laird and Mirage, a brief peek at future projects, and a print run summary of Mirage publications)

*Corben TMNT Preview (2-page preview of “You Had To Be There”, by Eastman and Richard Corben)

*Rogues Gallery (Pinups of the Shredder, Casey Jones: Crazy Man, Leonardo vs. the Shredder; art by Eastman and/or Laird)

*There was never a Turtlemania Special #2.

The Turtlemania Special is something a lot of folks out there own but I don’t really think appreciate (well, unless you own one of those Silver or Gold versions, in which case you appreciate it right to the bank).  By “appreciate”, I don’t so much mean the actual content of the special, but more so what it represents in the timeline of the Teenage Mutant Ninja Turtles franchise.

1986 was one year before the Fred Wolf cartoon and Playmates toyline turned the characters into a cultural phenomenon, but this special sort of marks the first spark of “Turtlemania” (as the title suggests).  Clearly, even before there was a TV show and boat-loads of merchandise, there was something about the Ninja Turtles that was catching peoples attentions; so much so that one individual (Robert Wilson) decided to self-publish a part-documentary/part-advertisement for the brand.  Not only that, but he got other indie comics names, such as Bob Burden and Dave Sim to lend either their art or their characters to the project.

TMNT was turning heads and catching on in a big way, and though what we recognize as Turtlemania in a pop culture sense was still a year off, I’d say it started right here. 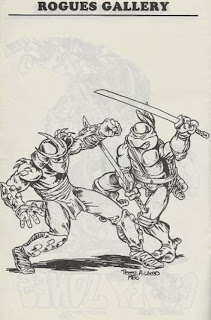 That little history lesson out of the way, what about the content of the Turtlemania Special?  Well, much of it is dated to the point where some might find it “quaint” at best and “useless” at worst.  12 pages are dedicated to previewing comics that have been out for a decade and a half, now, leaving the thumbnails and rough pencils to be the only attraction for hardcore fans.

The print run listing in the opening editorial is useful, at least as a first-hand source for that kind of information (though the official Mirage website has those numbers readily available and, well, they’re a first-hand source, too).  The editorial is more charming in that it offers quotes from a younger Eastman and Laird, back when they still had dreams of someday working for Marvel and DC (Laird says that he would like to work on DC’s The Demon, while Eastman pines to work on Marvel’s Daredevil).  There are other tidbits in there, like a working title for the Palladium TMNT & Other Strangeness RPG apparently having been “Turtlestrangeness”.

I guess that leaves the pinups.  Well, they’re neat!  Eastman and Laird art you may not have seen, though as pinups they’re perhaps a little bland; just the Turtles striking standard action poses.  I rather liked how Casey Jones was listed under the “Rogues Gallery” header alongside villains like the Shredder.  This was early enough in Casey’s life that his status as “friend or foe” was still up in the air (after his first appearance in Raphael Microseries #1 where he antagonizes Raph, but before his second appearance in TMNT Vol. 1 #10 where he joins the gang). 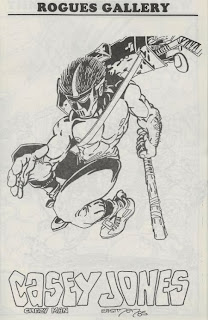 The Bob Burden poster is the usual Bob Burden/Flaming Carrot stuff.  Random nonsense that’s supposed to be funny, I guess.  But hey, I think it marks the first collaboration between Eastman, Laird and Burden (and the first official time Cerebus was seen alongside the Turtles, right?), so there’s that.

Anyhow, I’ve found myself fascinated with that little span of time between the TMNT’s debut in 1984 and their transformation into corporate mascots in 1987.  It was when the franchise was growing and branching out in strange ways, but still flying under the general public’s radar.  There’s a lot of neat stuff to dig up from that brief era, and while a lot of it may only attract the interest of Ninja Turtle history buffs, every tiny bit is a piece of history.