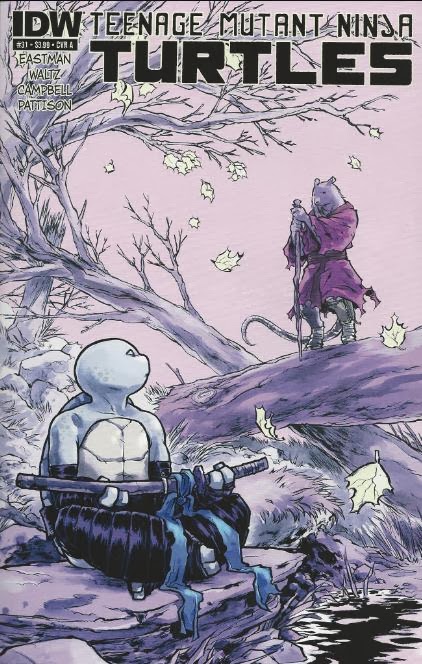 In the barn, Don and Casey bond over a busted motorcycle they're fixing up and simultaneously arguing as to whether math has any place in sports.  They get the ole girl running and Casey confides in Donnie that he’s just happy that he got out of going with April to the library for the afternoon. 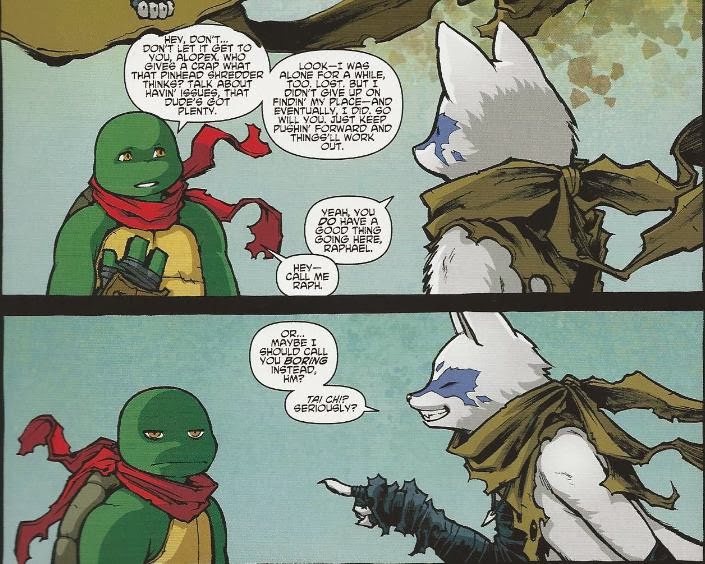 Out in the woods, Raph is practicing tai chi, which invites the mocking laughter of Alopex.  Raph isn’t surprised she finds tai chi boring, as it isn’t an art form intended to kill.  Alopex explains that she didn’t join the Foot Clan because she enjoyed killing.  She joined because, as a “freak”, the Clan gave her a feeling of acceptance.  The Shredder ruined all that when he murdered her family.  Raphael says he understands what it feels like to be lost, as he was separated from his own family for a time.  Softening up, he tells her to call him “Raph”.  Alopex snickers that she’d rather call him “boring” and the two begin playfully sparring.

By the lake, Leo is practicing with his katana when painful memories of the Shredder force him to sheath the blade.  Splinter comes hobbling up to his son and begins to tell him about old Japanese legends involving cursed swords which could not be sheathed until they had drawn blood.  Splinter says that such legends are patently untrue, as swords are only extensions of their user’s will.  The Shredder attempted to make Leo his “sword” but Leo defied him and refused to draw blood.  By doing so, Leo proved that he was not a weapon, but an individual.  The colorful allegory fails to make Leo feel any better.

As Leo begins to walk off, Splinter tells him that there was a time when he believed himself to be nothing but a weapon wielded by the Foot Clan.  Tang Shen taught him to think otherwise when she became pregnant with Leo and asked her husband to walk away from the Clan and raise his family.  This talk of Tang Shen reaches Leo and he turns to face Splinter.  Splinter hands him his blue bandana and tells him that out of respect for Tang Shen, he won’t allow Leo to forsake his family.  He tells Leo that now more than ever, they need to come together as a family.  As Splinter leaves, Leo contemplates his bandana. 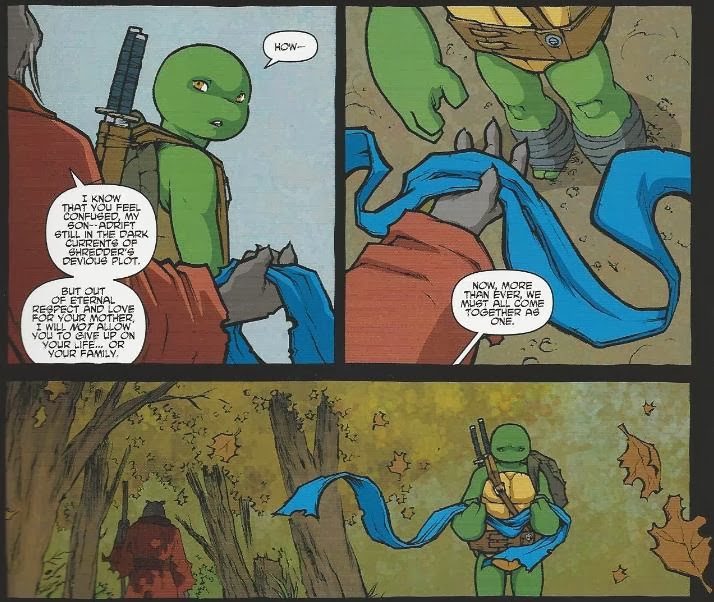 As Don and Casey show the bike off to Mikey, April pulls up, back from the library… and the salon!  She’s got a perky new ‘do and everybody digs it.  As April and Casey drive up to the farmhouse, Casey asks if April was able to use the library’s internet connection to dig up anything on Stockgen.  April reveals that the vial of ooze she has is essentially an all-purpose healing potion, with abilities far beyond any medical cure-all on Earth.  Unfortunately, she only has enough ooze to cure one person and offers it to either Splinter or Casey.  Casey declines, and fells that Splinter would decline as well, as they’re both tough fighters and their wounds will heal on their own.  He suggests she give the ooze to her father.  April agrees, but wonders how to go about doing such a thing without revealing her knowledge of the Turtles.

In the barn, Splinter, Raph, Don, Mike and Alopex eat dinner.  With the knowledge that Stockgen is gone, Don suggests they make the Technodrome their top priority.  Splinter reveals that he helped Hob steal mutagen from Stockgen and fears he inadvertently assisted in the building’s destruction (to say nothing about helping Hob’s “mutant army” along).  He laments that it was a necessary evil in order to help Leonardo. 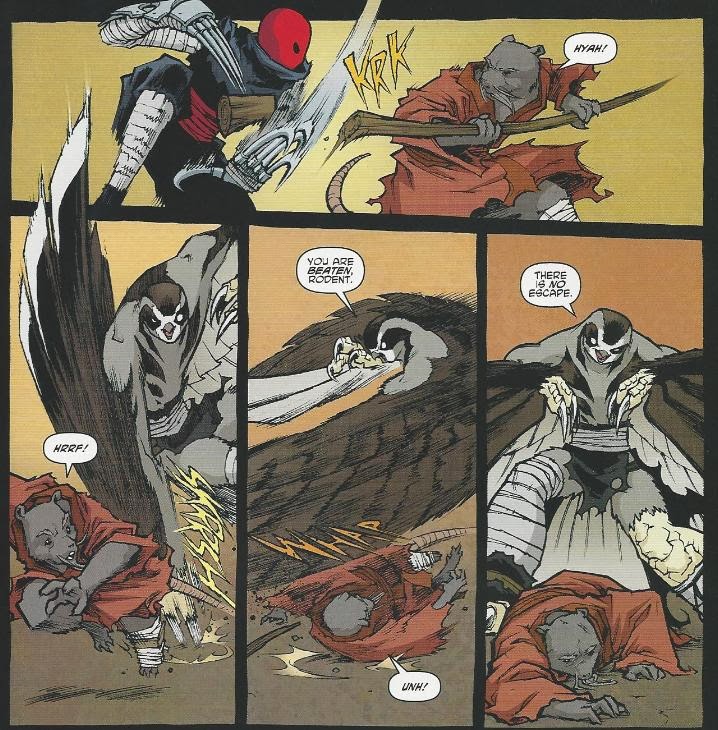 Suddenly, Koya and four Foot Assassins drop in through the roof and attack.  Raph wonders how the Foot found them and when he sees the Assassins deliberately ignoring Alopex, he figures it out.  Enraged, Raph tackles the protesting Alopex and takes their fight outside.  The Foot Assassins, meanwhile, prove to be more skilled than regular Foot Soldiers and give Mikey and Don a run for their money.  Koya makes short work of the injured Splinter, but before she can administer the killing blow, she’s interrupted by Leonardo (wearing his blue bandana).

*This issue was originally published with 3 variant covers: Cover A by Campbell, Cover B by Eastman and Pattison, and Cover RI by J.K. Woodward.

“Northampton” is nearing its conclusion and the storyline’s hitting all the notes where you’d expect them to be.  Not a bad thing, as the story’s been flowing pretty well (so long as you skip X-Files/TMNT: Conspiracy #1 and its excess of distracting continuity errors) and despite being a “breather” arc, it still feels like the various storylines are moving forward.

I guess we have to talk about Raphael and Alopex’s “romance” or whatever; it’d be “the elephant in the room” if I tried to ignore it (though really, it's more of a budding friendship than a romance).  The obvious thing to do would be to compare the relationship to the one shared between Raphael and Ninjara in Archie’s TMNT Adventures.  I can’t blame anybody for making that connection; you see a female fox-mutant join with the Turtles and start hanging out with Raphael, the instinctive response is to presume it to be a callback to the old Raph/Ninjara thing.

But the Raph/Ninjara romance was lousy, at least when it first started.  Ninjara was conceived as a villain, and not just any villain, but a genocidal villain.  In TMNT Adventures #29 she tried to help Chien Khan exterminate the entirety of the human race.  Ninjara wasn’t just into genocide, she was into hardcore ethnic cleansing.  Then, by TMNT Adventures #31, all was forgiven.  Or maybe that should be, all was forgotten.  The fact that she attempted to aid in the deaths of billions was brushed under the rug so that Raphael could have a convenient love interest and nobody ever mentioned her global murder attempt again.

The reason I bring this up is because when Alopex went into her “I don’t like to kill, honest” speech at the start of the issue, all I could think about was how Steve Murphy had tried to ignore Ninjara’s murderous behavior like it was no big deal.  Alopex killing all those Foot Soldiers in her Villain Micro?  No big deal.

But the visual record would contradict that.  She relished killing those Foot Soldiers in her Villain Micro.  She mocked them and made a game of it.  She can say “I was never in the Foot Clan for the killing”, but there’s evidence she certainly enjoyed it.  It doesn’t matter how cute Ross Campbell draws her, Alopex still has a history as a stone cold killer (with the fact that she only killed Foot Soldiers and Savate thugs as her solitary saving grace from being “irredeemable”).  So that entire sequence where she flirted with Raph just rang insincere to me; like the script was trying to brush all her killing under the rug with a “woe is me” routine.

And then the ending of the issue happened and I did a complete 180.  By the looks of things, maybe it was all an act on Alopex’s part.  Or, at least, I’m hoping that remains the case (she utters a “Wait—No…” before getting tackled).  Raphael already had trust issues with Alopex, so this betrayal (by the looks of it) should promptly put a nail in the coffin of any potential romance between them.  And man, I have my fingers crossed that that’s how it goes down.  The Raphael/Ninjara romance had to be forced sideways into the TMNT Adventures comic and required the readers to forget about “all that stuff she did” in order for it to work.  A Raphael/Alopex hookup would require roughly the same level of execution and I’d rather not go through all that again.

Alright, let’s talk about something else.

There are a lot of little character moments in here, mostly regarding interaction between pairs.  Casey and Don bonding over the motorcycle seemed like a deliberate callback to “Teenage Mutant Ninja Turtles the Movie”, where Don and Casey were teamed up as buddies and bonded over an old truck.

I’m a bit of two minds about them being so chummy.  One of the better bits of characterization in the Mirage comic was that Casey and Don didn’t much like each other for a while.  Their personalities were too polarizing and they got on each other’s nerves.  Likewise, the current Nickelodeon TMNT cartoon has revived that antagonistic relationship (this time with April being the source of contention between them).  The friction between the characters made their dynamic interesting.  If everybody gets along and is buddy-buddy… Well, that’s a little boring, isn’t it?

All that being said, Waltz used an homage to the first live-action movie as a precedent, so it's not like the concept sprung completely out of the blue.  And the idea that Don and Casey could get along over their single common interest (auto-repair) was an idea Mirage eventually adopted (in TMNT Volume 4).

It’d just be nice if Casey’s interaction with each Turtle was a bit different, you know?  Same with April’s.  Break up the monotony.

Splinter’s speech to Leo, vaguely recalling the myths surrounding Muramasa blades (you can wiki that shit, yourself), was a nice bit of allegory and appropriate as one of Splinter’s cryptic ramblings.  I rather liked how Leo just wasn’t feeling up to the whole “metaphorical fable” business and tried to just walk away, prompting Splinter to talk more plainly.  It was a good moment and I’ve enjoyed all the significance behind the bandanas IDW has been doing since the book started (every time they change colors, it holds some sort of symbolic meaning).  I think my one criticism of that scene is the monotony of Leo’s dialogue.  Here, tell me if you can spot the trend:

Leo… Leo says those four sentences in a row.  And… And it got a little annoying.  Some… Some proofreading would have been cool.  That… That’s all I’m saying.

I’m already liking Koya, though I don’t know how much of her personality to attribute to the script or how much is the handiwork of Ross Campbell.  Her dialogue consists of some pretty formulaic one-liners (“You are beaten”, “There is no escape”, etc), but Campbell just infuses her face and her body language with so much pep and character.  The cocked eyebrows, the head tilting, the sneering, the creeping pose she makes over Splinter… She just looks like she’s going to be really fun; a villain that seems to genuinely enjoy being bad.

Also, I liked the designs on the Foot Assassins, especially those big claws that remind me of the shadow-dude from “Ninja Scroll”.  It’s refreshing to see a Foot Clan design in the IDW comic not come equipped with a dorky scarf, too.  On a tangent, I’ve always liked the idea that there are different ranks and divisions of Foot Ninja beyond just “Foot Soldier” and “Elite Guard”, and that each division has its own unique uniform and flavor.  I really hope we see more of that.

All that and April’s rocking a new ‘do (oh, and her dad might be getting out of his wheelchair).  Amazing how much story they can pack into a scant 22 pages and still find room for a dramatic splash page.  Impressively economical!

Grade: B- (as in, “But Koya IS a girl, right?  I thought I read Curnow drop a reference to her gender in the letters page, but I could just be crazy”.)
Posted by TMNT Entity at 7:17 PM