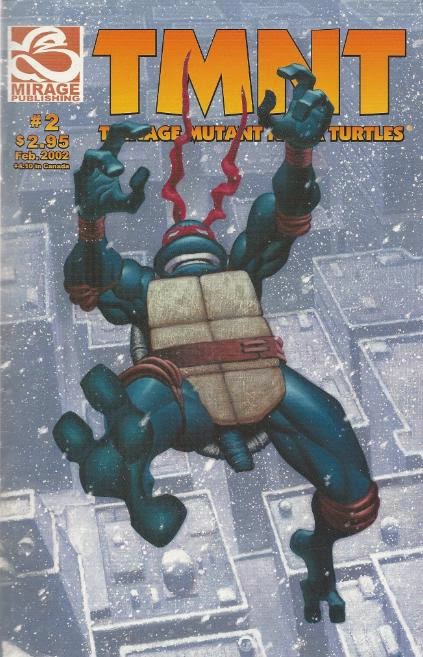 Woozy, Michelangelo wakes up in the back of an ambulance.  Paramedics are seeing to his injuries and about to sedate him.  Mikey freaks out and rushes through the backdoors of the ambulance.  As it turns out, he was in a FLYING ambulance and suddenly finds himself falling from several hundred stories in the air.  He’s caught by the angelic winged flying man, Raptarr, who carries him back to the flying ambulance.  Michelangelo passes out and the paramedics begin treating him. 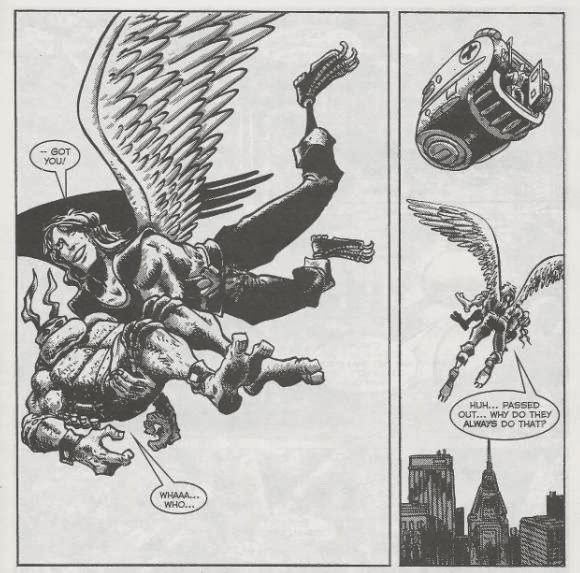 Down in the sewer lair, Leo suggests they go look for Don and Mike, but Raph reminds him that they can take care of themselves.  Besides, they’re expecting a visit from Casey with news regarding April’s doctor’s appointment.  Leo mentions that April and Casey have been trying to have a baby for five years, so he hopes the news is good.

Meanwhile, Mikey wakes up in a hospital bed.  He’s body aches, but he figures he needs to escape immediately.  A nurse appears on a video monitor, warning him to stay in bed.  Seeing that Mike won’t cooperate, she tells him that his belongings are in the closet and that he should check out at the front desk before leaving.  Mikey is confused, but finds his belongings where the nurse said they’d be.

He makes his way down to the lobby and finds the waiting room filled with superheroes, mutants, aliens and robots.  A doctor (Doctor Singh) and two orderlies approach Mikey, warning him that his injuries are too fresh for him to be out of bed and that he needs to get back to his room.  Mikey flips out and starts attacking the orderlies, but the fight is broken up by Zippy Lad, who comes rolling up in his wheelchair.  The geriatric (going by his real name, “Pat”), tells Doctor Singh that he knows Michelangelo and that he’ll talk some sense into him. 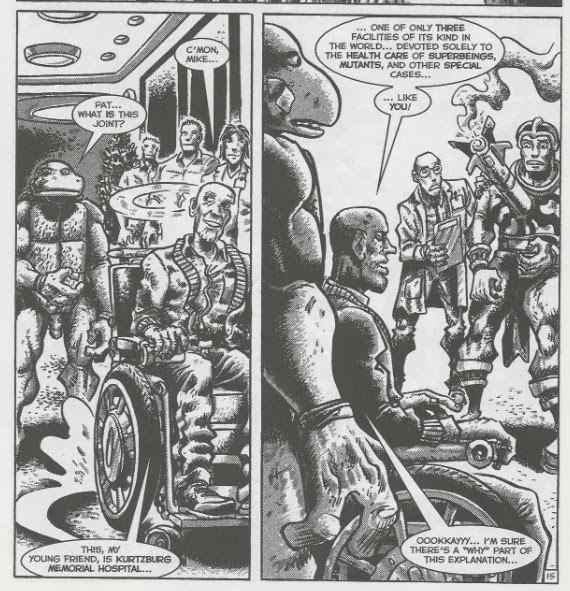 Mike follows Pat back to his room while the aged superhero fills the Turtle in on the situation.  He’s currently inside Kurtzburg Memorial Hospital, a secret facility in New York that treats superheroes, mutants, extraterrestrials and other “unusual” patients so that they don’t have to deal with the exposure of a normal hospital.  In fact, Pat is on the board of directors.  He was at the hospital when the paramedics brought Mikey in and vouched for the Turtle’s status as a “good guy”.  Mikey climbs back into bed and Pat promises to check in with him in the morning.

Down in the lair, Donatello comes rushing in with news about the abandoned armored car he found.  Raph and Casey, getting bored just watching TV, grab their toolboxes decide to go check it out.  Leo, on the other hand, stays behind to watch “Junkyard Wars” in peace (because that’s a contemporary reference that won’t get dated).

They follow Don, who suggests that some robber likely stole the car and drove it down the sewer tunnel they’re standing in.  He takes them to a flimsy wooden wall, which he also suggests the robbers built to stash the truck.  Casey muses that this all sounds very familiar, as he vaguely remembers a news story from the ‘70s about an armored car heist. 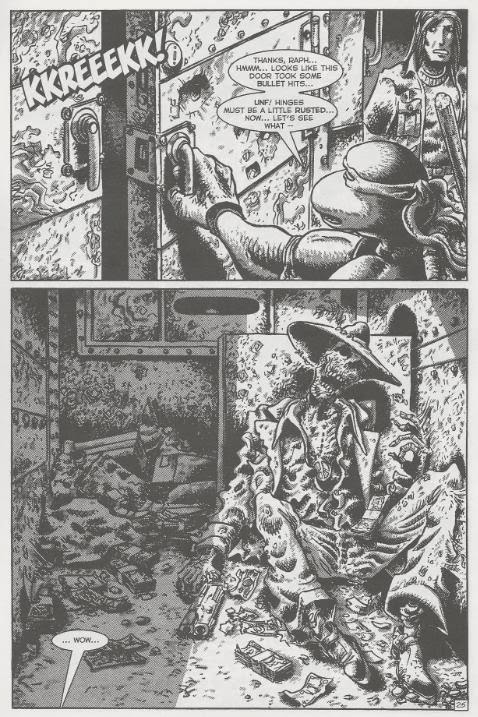 Inspecting the armored car, they find it loaded with skeletons, all dressed in vintage ‘70s clothing.  Donatello checks the engine and suggests all the vehicle needs is a de-gunking and a tune-up and it should work just fine.  Don and Casey go back to the lair to get some extra car parts, while Raph stays behind with the skeletons.

At Stainless Steve Steel's farmhouse in Northampton, Splinter sees Shadow off as she takes her dirt bike for a spin.  She meets up with her boyfriend, Jay, and suggests they go back to her dad’s old farmhouse, which has been abandoned for years, and start a fire in the fireplace.  Jay asks if he can finally meet her family back at her current living place, especially the sagely grandfather she’s always talking about.  Shadow refuses and says that her family just isn’t ready to meet Jay yet.

Out in space, orbiting the moon, the Utroms pilot some small ships over the facility they’d built into the satellite’s surface.  The facility lifts up from the surface of the moon as a large cylindrical craft and the Utrom’s prepare for “phase two”.

The Turtles inhabiting a world already overrun with superheroes is an idea that Eastman and Laird introduced pretty early into their run.  With Radical and the Justice Force running around, superheroes are just a part of everyday life in the Mirage universe.  Likewise, the fact that the Turtles can’t go one weekend without bumping into aliens or monsters or ghosts or other mutants also illustrates just how overpopulated their world is with “super” beings.

So when you put it into that kind of context, the Kurtzburg Memorial Hospital makes perfect sense.  There’s much more weirdness in the Mirage universe than just the Teenage Mutant Ninja Turtles and everybody needs some medical attention, sometimes.  In a way it makes the Turtles seem less special, as how could normal folks find them "unbelievable" when superheroes are a mundane part of everyday life?  But again, that’s the way it’s almost always been in the Mirage comics, though the writers haven’t always been consistent in exploiting such an angle.

But what the Kurtzburg Hospital really accomplishes is to remind us, the readers, about just HOW exceptional the Mirage universe is and just HOW full of weird-os and super-types this world is.  As with the Madhattan Maulitia going apeshit about aliens in the previous issue, the hospital hammers home the fact that not only is this world filled with strange beings, but that people know about them and have been living alongside them for decades.  It’s important foreshadowing that will pay off in just a few more issues when the series makes its first major plot twist.

You’ll start to notice how “captioned” it all seems to be.  Like Jim Lawson drew the pages and then Peter Laird went in and wrote all the dialogue based on what he was looking at.  If that’s the case, then that would make Jim Lawson “Jack Kirby” and Peter Laird “Stan Lee”.  Oh, cruel irony!

Anyhow, I say the dialogue feels “captioned” because characters say something in every single panel, even if it’s something insultingly obvious.  The characters are awkwardly talking to themselves, narrating every move they’re making to the audience even when the audience can clearly see what they’re doing and figure it out on their own.  Donatello has to tell the readers that he’s opening the door to the armored car.  Why did he have to tell us that?  We can see him doing that just fine.  That’s what the art is for.

And it DOES have that “Stan Lee” style to it, where for whatever reason Laird doesn’t give the readers enough credit that they can divine the context of a panel through the art, or he doesn’t give Lawson enough credit that he can express an action through his art without captioned dialogue explaining everything to the reader.  That’s how Stan Lee wrote/captioned dialogue in his comics back in the ‘60s and it can get exceedingly tedious.

But like I said in my last review; stylistically, nothing in this volume is going to change, so you’re just going to have to get used to the Stan Lee dialogue.

As for Jim Lawson’s art, I think the guy looks MUCH better when he’s got somebody else inking and toning his stuff.  But even then, some of his pencils… um… 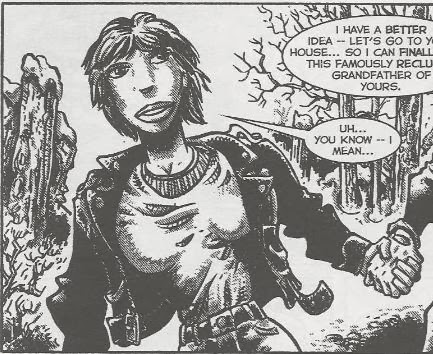 Look at that anatomy.  Look at that FACE.  What the hell kind of creature are you even supposed to BE, Shadow?