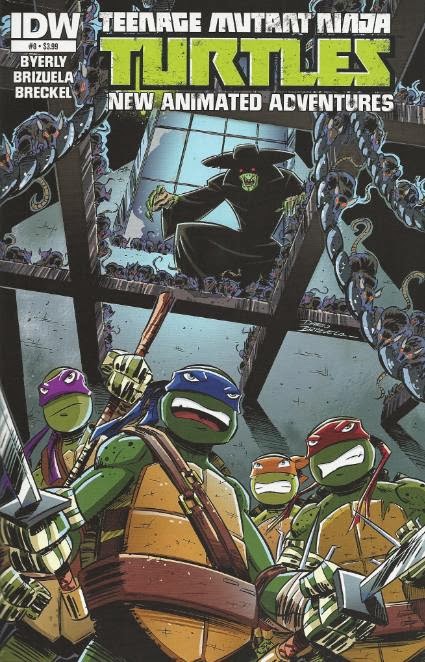 On their way home from Murakami’s noodle shop, the Turtles and April suddenly get the feeling that they're being watched.  April feels it even moreso thanks to her latent psychic powers.  Suddenly, thousands of rats flood the alley and everyone flees to a rooftop.  The rats eat away the ceiling and the Turtles and April come tumbling down into an abandoned building.  In the darkness, they’re greeted by the Rat King, looking for revenge. 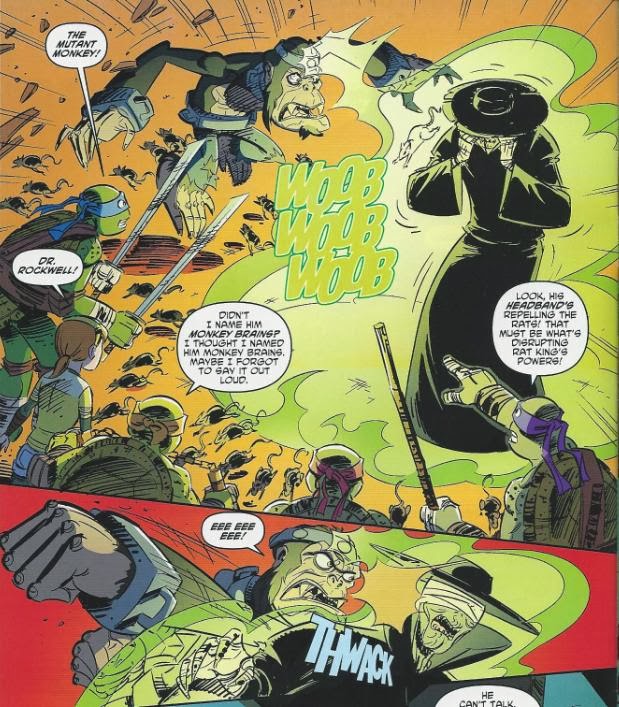 Someone else is looking for revenge, though, and it’s Dr. Rockwell (or as Mikey calls him, “Monkey Brains”).  The mutant simian uses a special headband to amplify his own psychic powers, overwhelming the Rat King and knocking him out.  Dr. Rockwell then carries the Rat King off, motioning for April and the Turtles to follow him.

At an abandoned warehouse, they find that Dr. Rockwell has created a new lab for himself.  He straps the unconscious Rat King onto a stretcher and then attempts to communicate with the Turtles.  When they don’t get anywhere, Leo suggests that April use her psychic powers to form a link with Dr. Rockwell’s and communicate telepathically.  With some effort, she manages to get the story from Dr. Rockwell.  He created the headband to disrupt the Rat King’s powers and now that he has his old ex-partner held prisoner, he hopes to create a serum to neutralize the Rat King’s abilities for good.

The Rat King awakens and begins mocking his ex-partner, who needs to concentrate in order to continue disrupting the Rat King’s psychic abilities with his headband.  Dr. Rockwell’s primitive monkey instincts eventually succumb to the taunting and he attacks the Rat King, breaking his own concentration.  The Rat King wastes no time in summoning thousands of rats into the lab, which overwhelm Dr. Rockwell.  The Rat King steals the headband and puts it on, using it to amplify his psychic powers over the rats.  He instructs the rats to bond together and create giant rat-men homunculi that keep the Turtles and April busy while he escapes with the unconscious Dr. Rockwell (swept away in a wave of rats). 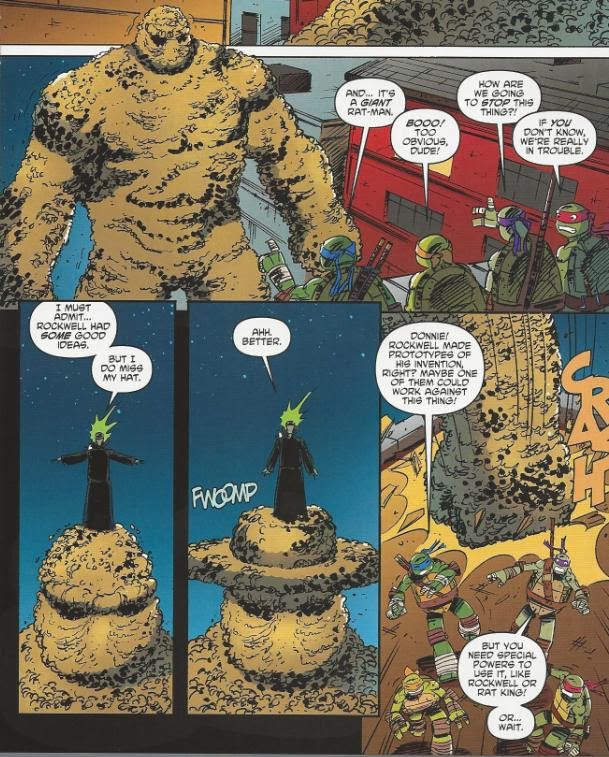 The Turtles and April escape through a window, but the alley begins to fill up with a river of rats.  The Turtles leave April on a fire escape and take off after the Rat King.  The Rat King has taken the thousands of rats and fused them into a towering rat-man in his own image.  As the rat-man attacks the Turtles, Don gets an idea and fetches April.  He takes her back to the lab and hands her one of Dr. Rockwell’s headband prototypes, suggesting she use it to amplify her own psychic abilities and stop the Rat King.  Through the rats, the Rat King hears of this scheme and sends his rat-man stomping toward the lab.

April attempts to use the headband, but being a novice psychic, can’t get it to work and is absorbed into the body of the rat-man.  Leo and Mikey grab the Shellraiser and attempt to ram the rat-man, but it reforms at the last second into a giant ramp that sends the vehicle flying.  The Rat King is about to declare victory when April uses her amplified powers to break apart the rat-man.  Dr. Rockwell also emerges from the pile of rats and snatches the headband from the Rat King.  The Rat King tells Dr. Rockwell that his psychic abilities are no match for his own, even with the headband.  April joins with Dr. Rockwell and their combined psychic powers overwhelm the Rat King and knock him out. 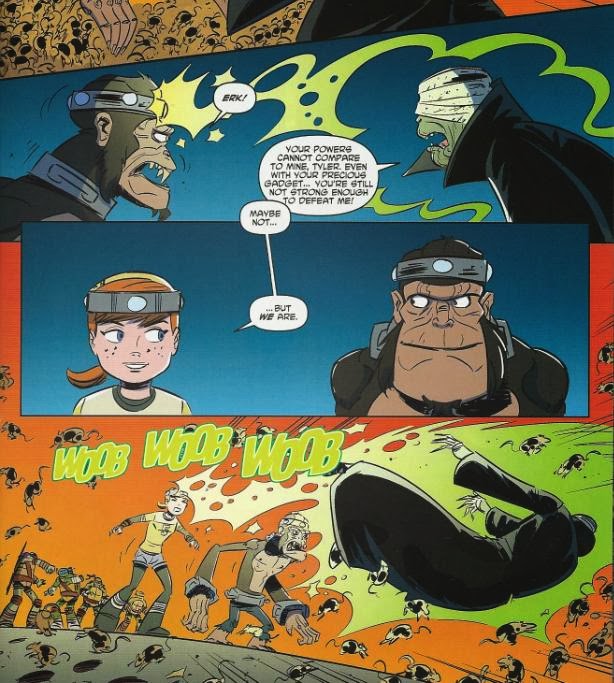 Dr. Rockwell is about to take the Rat King back to his lab, but all that's inside the Rat King's cloak are dozens of rats.  The villain has escaped again.  Dr. Rockwell is disappointed, but Leo cheers him up by thanking him for saving their lives twice in one night.  Mikey also thanks “Monkey Brains”, a name Dr. Rockwell finds infuriatingly distasteful.

*The origin of April’s psychic powers were explained in the season two episode “The Kraang Conspiracy”.

*This issue was originally published with 2 variant covers: Regular Cover by Brizuela, and Cover RI by Ciro Nieli.

So the Rat King is my favorite recurring TMNT villain.  I think I’ve made that clear in the past, but in case I haven’t, now you know.

The Nick TMNT cartoon produced one of my favorite incarnations of the Rat King, even if to date he’s only appeared in one episode (as the Rat King and not Dr. Falco).  The zombie-esque features, the creepy Southern Baptist preacher motif, freakin’ Jeffrey Combs doing the voice… Just a fantastic update.

It was great to see him make a comeback via IDW’s tie-in comic, since again, he’s only been used once in the TV series so far (though I’ve got my fingers crossed he’ll pop up in season two).  Byerly once again writes a tight script that feels like a compact episode of the actual show.  Great banter and characterization as usual and even some self-awareness to top it all off (Mikey not remembering if he ever openly nicknamed Dr. Rockwell like he has every other mutant in the series).  The thousands of rats being treated more or less like liquid, I’m not so sure I liked, but it did make for a pretty grim conflict (getting swept away by a river of nibbling, gnawing vermin is pretty horrifying when you stop to think about it).

What disappointed me with this issue is that there’s no… atmosphere.  Go back and watch the Nick TMNT episode “I, Monster” and you can see for yourself how much the boarders, directors and animators labored over that one to make it feel like a miniature horror movie.  They wanted this Rat King to be SCARY.

Brizuela’s art and Breckel’s colors, while excellent on any other issue, don’t make an attempt to capture that same quality of horror or really any “atmosphere” to speak of.  The Rat King is not an enigmatic horror movie monster in this story, but just another super villain that gives cheesy monologues while BWA HA HA-ing about his evil scheme.  The visuals don’t capture the feel of the Rat King from the cartoon and that rubs me as being kind of a waste or a missed opportunity.  Another artist might have painted the shadows on thicker in the inking process or laid the pages out with more disorienting, expressionistic angles to keep the Rat King obscured and dark.

While Byerly’s script certainly captures the voice of the characters and the formula of the cartoon, the visual execution, at least on this issue, just doesn’t show enough ambition.  I like Brizuela’s art and Breckel’s colors and I’ve been digging them throughout this series, but this issue featured a character whose whole deal is that they’re supposed to be scary and the mood just isn’t there.

All that said, it’s still a good story.   And unlike a lot of these New Animated Adventures issues, it actually feels like it ties in more directly with the TV series and gives a greater illusion that it’s continuing character and story arcs.

Grade: B- (as in, “But I always felt that the Nick writers missed a golden opportunity for another horror movie reference when they decided to give the Rat King a real name.  Instead of Dr. Victor Falco they should have gone with Dr. Ben Willard”.)
Posted by TMNT Entity at 12:31 PM