A Lot to Learn 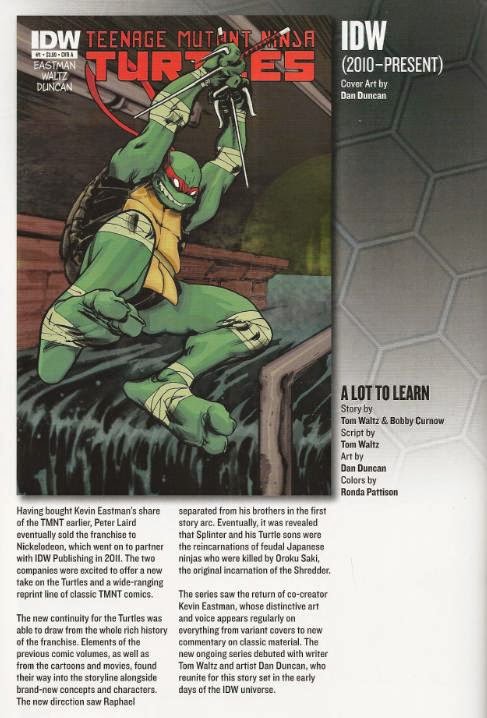 It’s been less than a month since Raphael was reunited with his brothers and Splinter, and he’s not adjusting very well.  In training practice, his martial arts skills are woefully inadequate as compared to his siblings’ and he continually gets his butt kicked.  Frustrated and angry, Raphael storms out.  Splinter and Leo try to tell him that he’s making great progress, but Raph won’t hear it and leaves. 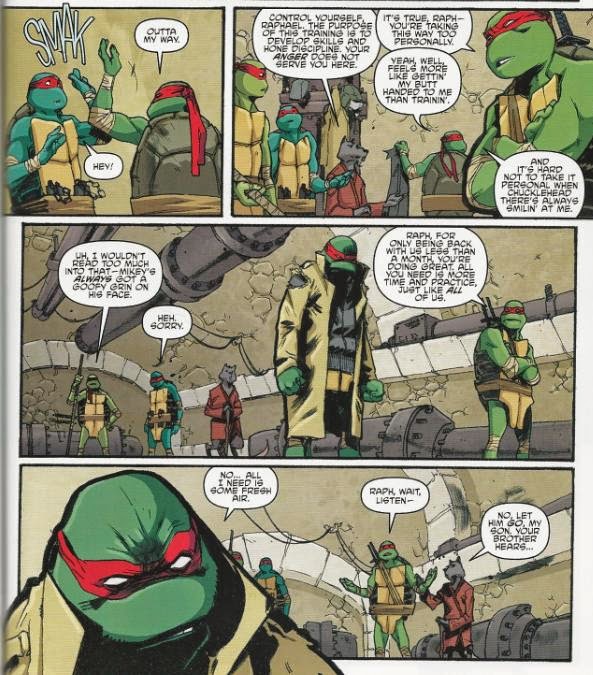 On the streets, Raph hooks up with Casey and the two go for a night on the town, beating up thugs.  Raph recalls how he thought being reunited with his family was the greatest day of his life, but begins to think that maybe he was more at home on the streets, going it alone. 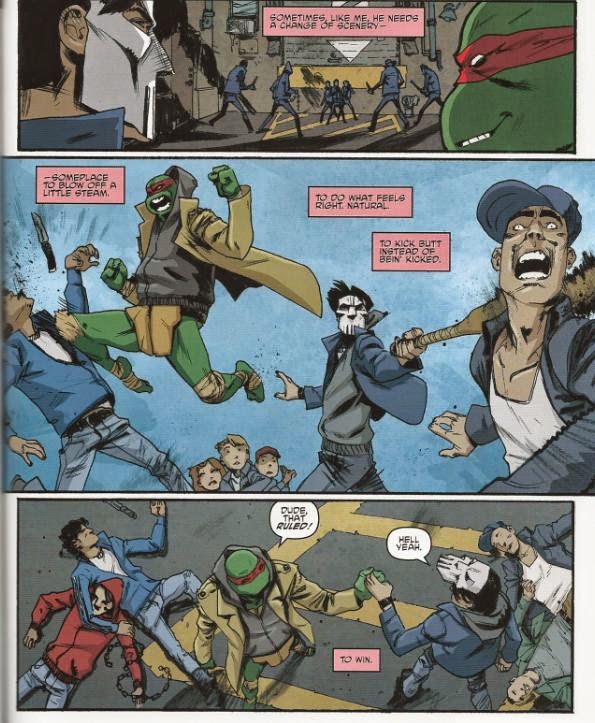 After they finish for the night, Casey invites Raph over to his place to watch TV.  He assures Raph that his dad is probably passed out and won’t even know he’s there.  Seeing Casey so nonchalantly willing to return home to a broken family, but dedicated to his family nonetheless, Raph realizes he was wrong to walk out.  Raph declines the invitation and decides to head back to the sewer lair to make things right. 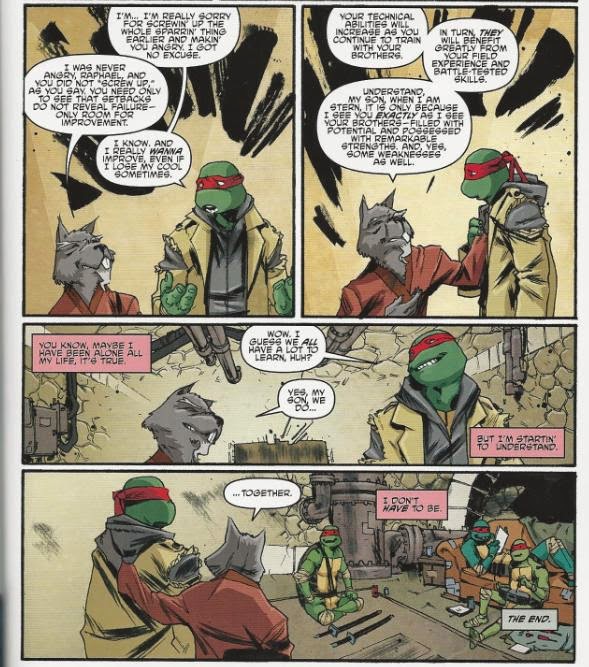 The initial arc of the IDW series, “Change is Constant”, was slow and dull and plodding and I didn’t really like it.  Once it was over with, I was more than ready for the narrative to move on and start to get somewhere; to the good stuff.  It did that, but by skipping ahead past all of Raph’s acclimation to his new family life.  When we see him again, he’s just finishing up his training and is suddenly on the level of his brothers (and is chummy with them like old times).

For the flow of the ongoing series, it was the right move to skip over Raph relearning martial arts and getting to know his family again.  “Change is Constant” took FOREVER to get things started and another issue of Raph learning the ropes would have been a torturous ordeal at the time (this was when there were no other supplementary TMNT books; just the one issue a month).

That said, it’s still a narrative gap and one that needed to be told at some point down the line, when the IDW TMNT series had kicked into gear and we could afford to have a lighter sort of story.

Waltz and Curnow get to the point and “A Lot to Learn” winds up being a vital epilogue to “Change is Constant”.  That arc was all about Raph, getting him back to the family so the storyline could actually begin, and he needed more closure than just a group hug.  We see here that he really isn’t taking getting beat on by his brothers for a month very well, having been top dog on the streets, and he REALLY isn’t warming up to them, as his memories haven’t been restored and these are brothers he hardly knows.

Using Casey as the means for Raph to come to his senses was an interesting choice, though it’s just a little problematic.  Raph sees Casey’s devotion to his deadbeat dad as a source of inspiration; to never give up on your family even when times are tough.  But Casey, uh, his devotion to his deadbeat dad wasn’t exactly ever a GOOD thing and his life didn’t start to improve until he found the courage to walk out on him (and join his “real” family; the Turtles).  If Raph could look into the future and see the events of TMNT Microseries #6: Casey Jones, and how self-destructive Casey was by staying with a family member that kicked his ass every day, he might have walked away with a VERY different message about family.

But, from the perspective of this story, those events are well into the future.  If we look at things from only four months into when IDW started publishing their Ninja Turtle books, the lesson Raph extracts from Casey’s home life doesn’t seem so counterintuitive.

“A Lot to Learn” is an important story and really improves the transition between “Change is Constant” and “Enemies Old, Enemies New”.  It’s a short epilogue, so it doesn’t slow the pace of the arc down to any noticeable degree.  A shame it probably came too late in the game to be included in the TMNT IDW Collection Volume 1 hardcover (which reprints the first 12 issues of the ongoing, plus the first 5 Microseries issues in chronological order).  UPDATE: Hey, it's in there!  So that's good.

Grade: B- (as in, “But I guess the important distinction is that Mr. Jones beats up Casey because he’s a drunken loser and the Turtles beat up Raph because they love him”.)