Gizmo and the Fugitoid #1 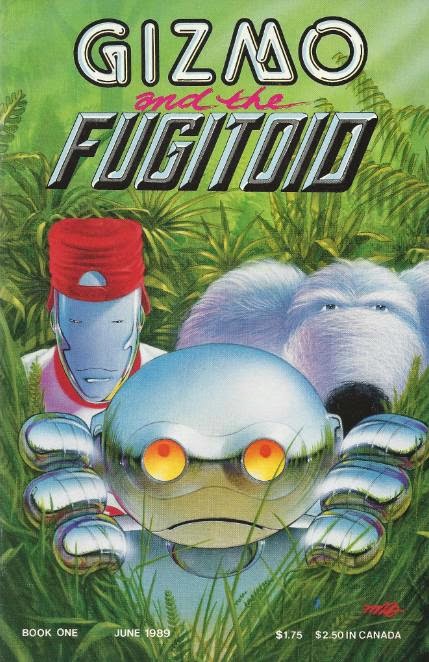 Travelling a space highway in their thinking ship, ‘Soto, Gizmo Sprocket and Fluffy Brockelton figure they’ve got it made.  Responding to an ad for the Federation Army Reserve Corps, they’ll each pick up a huge check for just five weeks of service on a "tropical paradise".  Gizmo figures it’ll give him time to work on his writing career, while Fluffy’s experience in the military leaves him confident the gig will be a cakewalk. 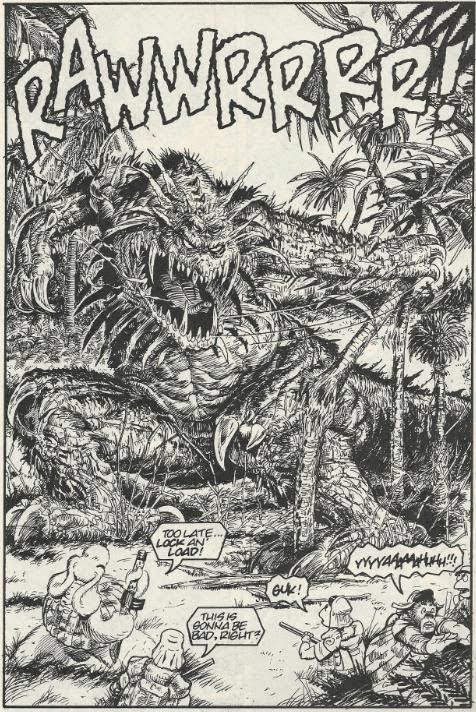 Four and a half weeks into their tour on the festering jungle planet, the two are utterly miserable and run ragged.  Gizmo remarks that if the Federats hadn’t impounded ‘Soto when they signed up, they’d have gone AWOL weeks ago.  Suddenly, a gargantuan reptile bursts out of the trees and attacks the platoon.  It slaughters all the soldiers save Gizmo and Fluffy, who inconveniently run out of ammo.  The two make a break for it and after some distance, they lose the monster.

Trudging through the jungle, they find the overgrown remains of a SAL-400 worker droid.  Gizmo suspects that it’s been lying inactive for years, but for the most part looks intact.  Figuring it might help them find their way back to base, Gizmo does some rewiring to get the droid online.  Eventually, the droid activates, but turns out to be no mere droid: He’s Professor Honeycutt, alias the Fugitoid.  The Fugitoid explains his situation… 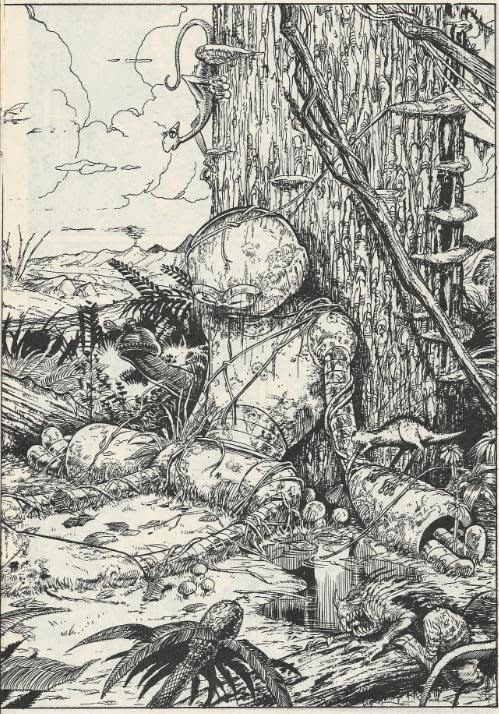 He used to be a scientist working for the Federats and General Blanque, but after an accident involving his menta-wave helmet, his mind was transferred into the body of his SAL droid.  Wanting the secrets to his transmat device for insidious purposes, Blanque dubbed Honeycutt a “Fugitoid” and sent his armies to capture him.  In his travels, he wound up being chased by both the Federats and the Triceratons.  Eventually, the Fugitoid decided to settle down on a planet with no intelligent life and that neither faction would find worth colonizing.  After stowing away on a garbage scow, he escaped to this “dump planet” and hoped to live a life of peace.  However, when his batteries wound down, he depowered and was apparently inactive for years.

When Gizmo tells him that the Federats have setup a base on the planet, the Fugitoid realizes he must escape at once.  Gizmo and Fluffy promise to help him and, following the flight paths of troop carriers and shuttles overhead, they spend the next four days headed toward the vehicle impound base. 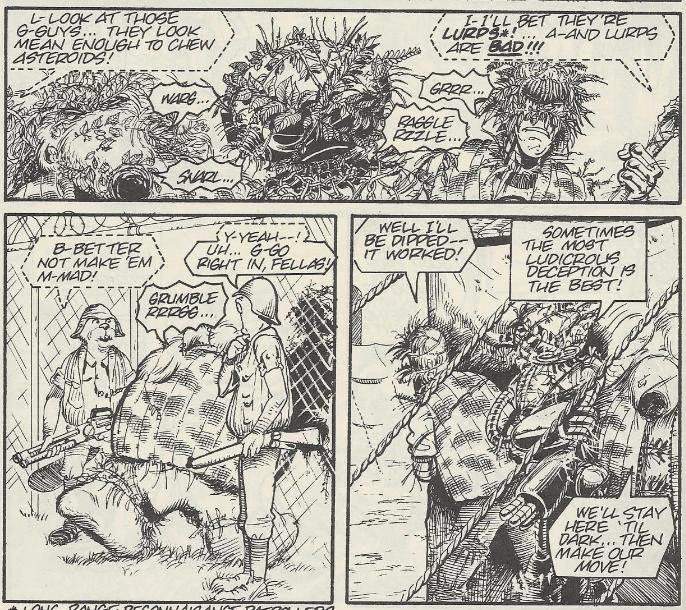 Arriving, the three disguise themselves as LURPS (long-range recon patrollers) and bluff their way past the guards.  They then find the lot where ‘Soto is impounded and Gizmo uses his mental bond with the living ship wake him up (so he can knock a guard out with his driver’s side door).  They then remove the boot with the guard’s key and take off.

They decide to take cover behind a moon until their next course has been calculated.  However, before they can take off, they’re caught in a tractor beam.  Much to the Fugitoid’s horror, the beam is drawing them toward a Triceraton asteroid ship…

*The story concludes in Gizmo and the Fugitoid #2.

*Gizmo last appeared in the story “King for a Day”, published in The Collected Gizmo.  Fluffy’s history in the military can be seen in the stories “Peace on the Line” and “Monuments”.

*Professor Honeycutt recaps the events which led to his becoming the Fugitoid, which occurred in Fugitoid (microseries) #1.  Oddly, no mention is made of the Turtles and the framing of the recap makes it appear as though the events of the micro just recently happened.

*The Gizmo comics take place in the future, sometime after TMNT Volume 4.  The Fugitoid was shown to still be wanted by the Federation as recently as Tales of the TMNT (Vol. 2) #54.

*On page 5, the photos behind the driver’s seat of ‘Soto are of characters from the Jim Lawson/Mirage series Bade Biker and Orson.

The continuing adventures of the Fugitoid!  Obviously, Eastman and Laird had wanted to do more with him after the initial outer space arc in TMNT Volume 1, but the little guy didn’t really have enough pep to carry his own ongoing or limited series.  So as they had with the Ninja Turtles, they elected to team him up again with an existing Mirage title: Gizmo.

According to the intro, Eastman and Laird had already mapped out the Fugitoid’s continuing storyline beyond his last appearance in TMNT (Vol. 1) #7, with Dooney’s characters being worked into the existing tapestry.  The result, though, is kind of weird on a chronological level.  There is no mention of the Turtles or how the Fugitoid became separated from the Utroms after his last appearance (where he went to go live in peace on their homeworld).  The recap he provides omits those adventures and goes straight from the events of the original Fugitoid microseries into the misadventure that led to his spending years inactive on a dump world.

I think they were trying to play fast and loose with continuity so as not to alienate new readers with a deluge of back story.  Keep in mind that in 1989, this was the first time the Fugitoid had been used since TMNT #7 (well, excluding the short tale “Terror by Transmat”).  In this story, the Fugitoid is deactivated for years, sort of allowing him to hibernate away the decades until his storyline catches up with Gizmo’s (whose adventures take place in the future).  Obviously, this extended hibernation period would get contradicted by TMNT Volume 4 and Tales of the TMNT Volume 2 stories, which show that the Fugitoid spent his missing time hanging out on the Utrom Homeworld, where we last saw him.

I’d recommend not thinking about it too hard (though clearly I already have).  Let’s just say that at some point between TMNT Volume 4 and Gizmo and the Fugitoid, Honeycutt got separated from the Utroms, escaped to the dump world and was deactivated for a few years until Gizmo and Fluffy found him.  Why he didn’t mention any of his adventures between his microseries and now, well, maybe he was just trying to be brisk with his life story.

Anyway, you really shouldn’t let all that silly continuity stuff bother you, because this is actually a fun and lavish-looking two-parter.  The story is very bare bones, but it’s more a means to convey Dooney’s glorious art, and he may be at his absolute career best with these issues.  There are a number of splash pages and two-page spreads that are simply eye-poppingly beautiful and he never spares the detail no matter how small his panels have to get to convey the story.  The jungle is lush and damp, the monsters are scaly and bizarre, the space vehicles are this zany mix of Buck Rogers retro and Star Wars contemporary, and the robots are all shiny as hell.  I mean, look at the Fugitoid on the bottom left of page 23; you can see the palm trees subtly reflected in his back and warped at a sideways angle.  It’s the little things like that.

Gizmo and the Fugitoid is more character-driven than it is story-driven, so the plot isn’t especially complex.  What really draws you in is the relationships shared by the cast and the friendly jabs they take at each other.  There’s a great balance between their strengths and foibles, a quality ported over from the Gizmo ongoing series, and no one feels more useful or useless than anyone else.  Fluffy’s a tough guy with a career military history, but he’s badly out of shape.  Gizmo’s a clever guy with a certain technical aptitude, but he’s got delusions of grandeur and is always looking for the easy way.  And the Fugitoid is of course a genius, but he’s also a trouble-magnet.

There’s a great dynamic going on and everybody is allotted their fair share of opportunities to both screw up and save the day.  It’s this sort of balance I appreciate in ensemble stories more than anything else, as there’s nothing worse than characters who are a designated “comedy relief fuckup” or "infallible god that can do no wrong".

Not much else to say.  While the story isn’t the most engaging, the gorgeous art and colorful characters certainly are, and they ought to draw you into the tale.  And at any rate, it’s fun to see a spinoff story starring one of the TMNT’s recurring characters and their adventures away from the main title.

Grade: B+ (as in, “Boy, I wish I had a bigger scanner so I could show you all the beautiful two-page spreads and also that I wasn’t too lazy to bother syncing the page scans together in photoshop”.)
Posted by TMNT Entity at 10:19 AM