Down in the sewer lair, the Rambo marathon is disturbed when a rainstorm cuts off the TV reception.  While the other Turtles leave to grab a pizza, Michelangelo decides to stay behind to catch up on his (comic book) reading.  Absorbed in an issue of The Last of the Viking Heroes, Mikey gradually drifts off to slumber-land…

Michelangelo suddenly finds himself on a ship.  Jon and Erik of the Viking Heroes are happy to see him, as Tomgar has had too much mead and can’t properly fight a troll that has attacked them.  They deck Mikey out in Viking gear and send him against the troll, but the brute beats him senseless.  Realizing he has to fight like a ninja, not a Viking, Mikey discards the gear, whips out his nunchakus and attacks the hairy creature. 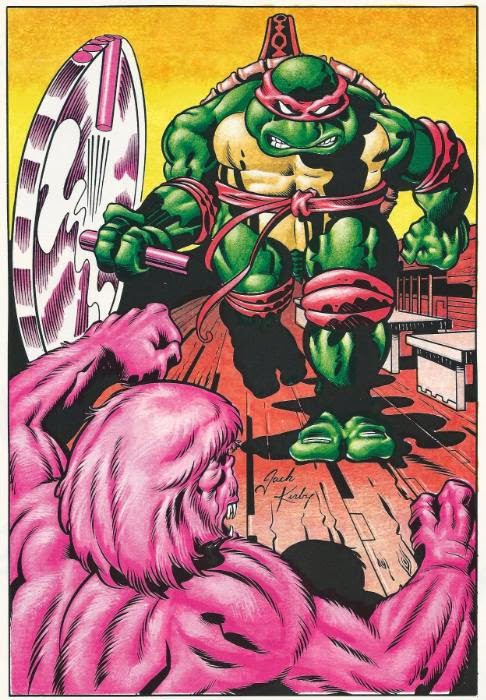 Going for the kneecaps, he knocks it off balance and then sends it hurtling into the sea.  The Viking Heroes thank Mikey for his bravery, but all he wants to know is how to get home.  Jon tells him that he simply has to click his nunchakus together and say “there’s no place like home…”

Mikey awakens back in the lair, floored by how realistic that dream was.  He decides to stop reading comics and catch a good movie, as he figures a flick won’t give him any weird dreams.  Of course, he begins watching “A Nightmare on Elm Street”…

*Although it was the third published, it is the second TMNT/Viking Heroes crossover in sequence.

*According to an editor’s note in The Last of the Viking Heroes Summer Special #3, this story was originally supposed to be published in Turtle Soup (Vol. 2) #1.  It apparently met with delays.

*This is the only one of the TMNT/Viking Heroes crossovers not to be collected in The Last of the Viking Heroes Limited Edition.

Odd that he isn’t credited in the issue; you’d think “Featuring a pin-up by Jack Kirby” would be a major sales draw.  On the other hand, it’s treated as a neat surprise.  You’re flipping through the Mark Thibodeaux art (which is nice) and then suddenly your eyes are greeted by a splash page with the signature “Jack Kirby” on it.  Yeah, didn’t see that coming.

Now, so far as The King’s art is concerned, this pin-up isn’t exactly his most spectacular work.  I guess it’s more a gimmick or a novelty, but it’s definitely “neat” to see a rendition of Michelangelo as drawn by someone so famous and beloved in the medium.  This actually wasn’t the only time Kirby drew the Turtles, either.  He did a piece of all four TMNT as a gift to Peter Laird: 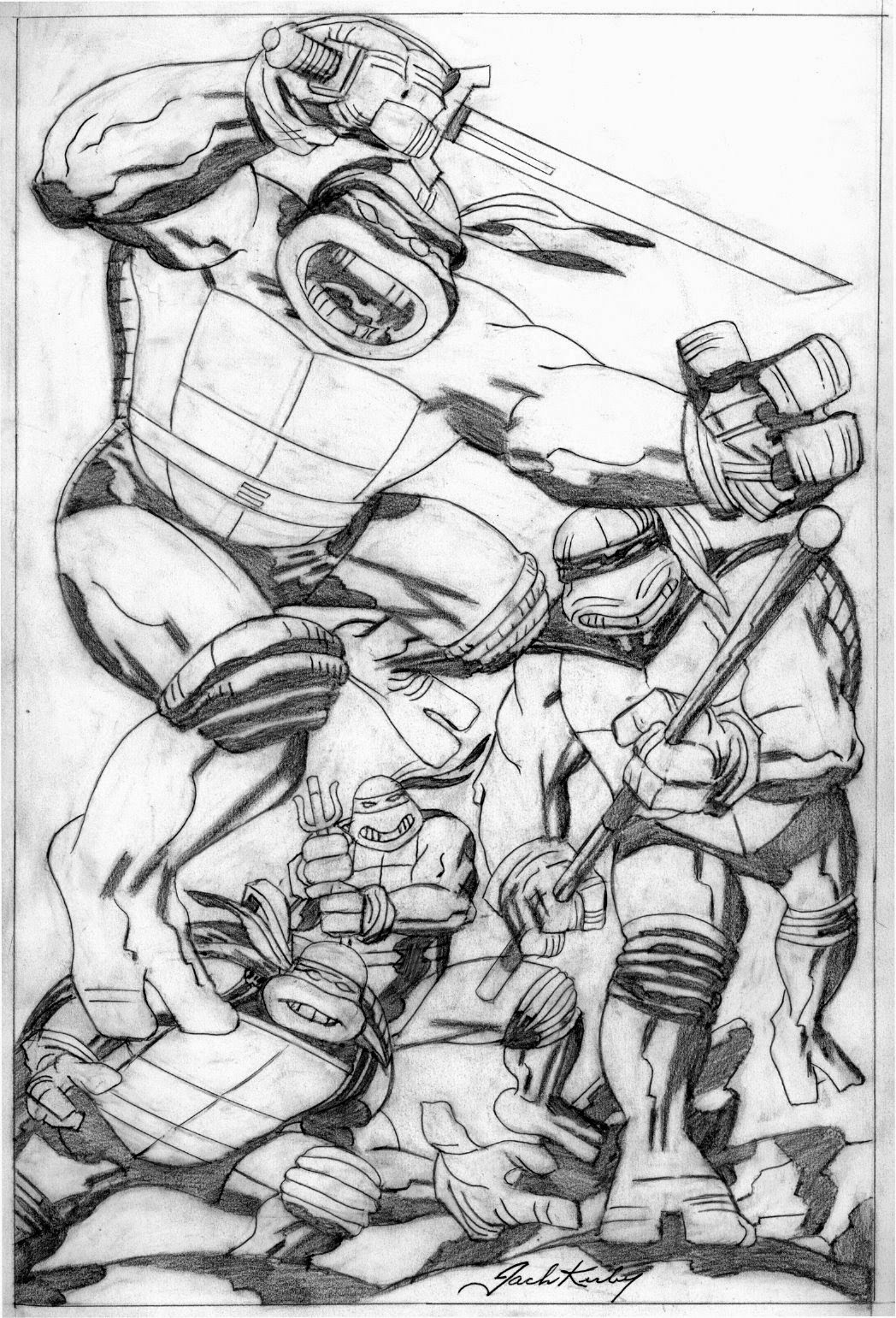 Eastman’s and Laird’s reverence for Jack Kirby isn’t exactly a carefully guarded secret.  Donatello (microseries) #1 was basically an extended love letter to him, with Kirby being treated as a legitimate “god” in the context of the story.  Eastman and Laird almost went so far as to introduce a Fifth Turtle named, you guessed it, Kirby in the fourth live-action TMNT film that never happened.  Because to Eastman and Laird, Jack Kirby ranks alongside Leonardo di ser Piero da Vinci, Raffaello Sanzio da Urbino, Donato di Niccolò di Betto Bardi, and Michelangelo di Lodovico Buonarroti Simoni as one of history’s finest artists.

Yeah, Eastman’s and Laird’s love of Jack Kirby at times transcended “professional respect” and bordered more on “unhealthy, obsessive idol-worship”.  Or at least it was just a lot of ass-kissing (Kirby was still alive when all of this stuff deifying him was being published).

Anyhow, the Jack Kirby pin-up is really all there is to discuss about this short.  There’s practically no story to it and Thibodeaux’s art, fine as it is, really only exists to frame the Kirby pin-up with some context and nothing more.  It’s neat for its novelty, but that’s about it.