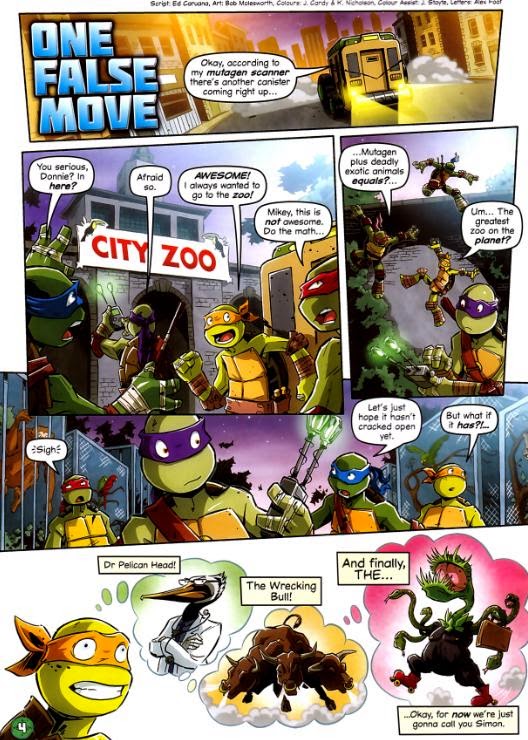 In the Shellraiser, the Turtles are using Donatello’s mutagen scanner to track the next canister of Kraang mutagen.  The scanner leads them to the city zoo which is populated with thousands of potential mutant monstrosities waiting to happen.

Sneaking in, they find the canister in the lion habitat, dangling on a branch just over the head of a slumbering king of the jungle.  Mikey is dispatched to climb the tree and collect the precariously balanced canister, as he’s the lightest Turtle.  Michelangelo decides to practice his ballet moves to show how light on his feet he is, which causes the canister to come loose and fall. 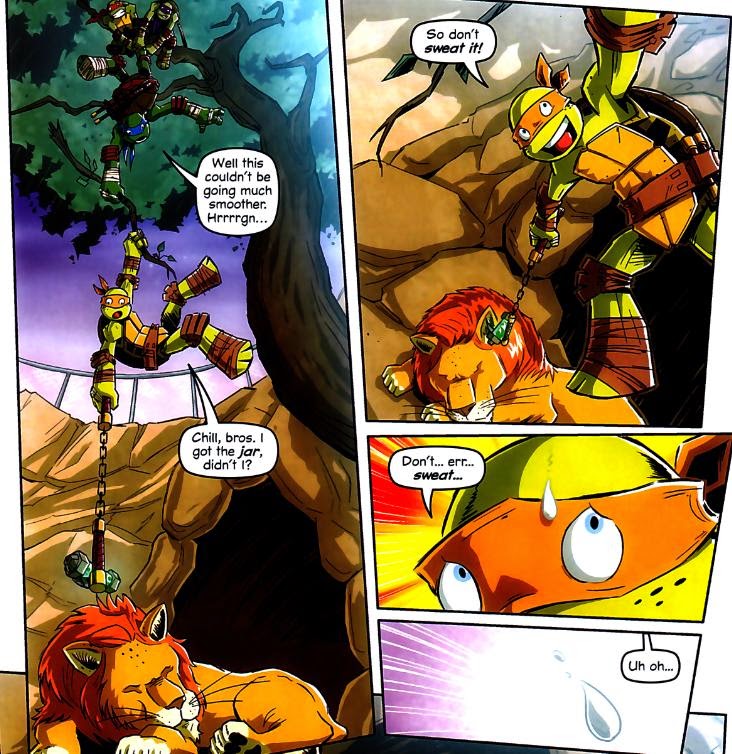 Mikey uses his nunchaku blade to hook the canister before it can hit the sleeping lion while the other three Turtles form a chain to grab him and keep him from falling.  Unfortunately, Mikey didn’t account for his own perspiration and a droplet of sweat lands on the lion, waking it.  The lion takes a swipe at Mikey and bats the canister out of its habitat… and into a tank of great white sharks.

Leo sighs and asks which of them is the strongest swimmer.

*This story is continued from TMNT Magazine (Panini) #15.  The story continues in “Caught on Camera”.

*Coincidentally, the same month this story came out, IDW published a story in TMNT New Animated Adventures #13 where the Turtles try to keep animals at the zoo from getting mutated: "April's Way".

You know, this probably would’ve made an awesome four- or five-minute animated short; like something to fill time between programming slots on Nick Toons or whatever.  There’s a lot of potential comedy havoc to be had with the Turtles blundering around a zoo, trying to snatch up a canister of mutagen before it creates a monster.

“One False Move” isn’t an animated short, though.  It’s a six-page comic strip and as such can’t do a lot with its concept.  The gag is funny, but is a situation with the potential to be so much more if it just wasn’t so short.  Be that as it may, you know, kudos to Caruana for coming up with a great idea and Molesworth gets a lot out of it in the art department.

Grade: C+ (as in, “C’mon, if this had gone in a different direction we might’ve gotten the Nick version of Dirtbag and Groundchuck!”)
Posted by TMNT Entity at 5:27 PM