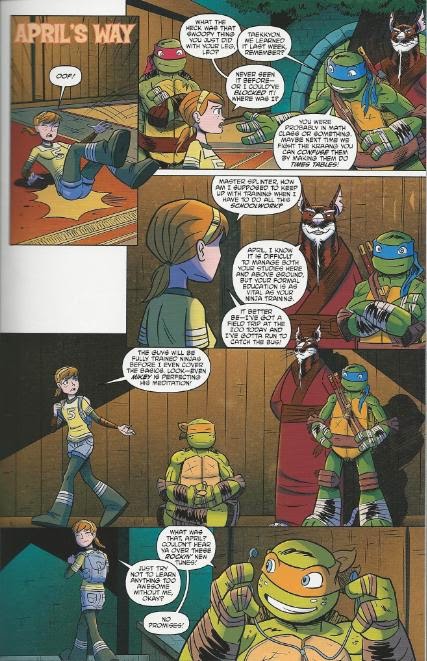 Down in the dojo, April is too preoccupied with schoolwork to focus on her kunoichi training.  Bitter that she has to go to school while the Turtles get to train in martial arts all day, she storms off in a huff to attend a class field trip at the zoo.

At the zoo, April takes notes on Ellie the elephant and the telltale signs that she might be distressed.  The zookeeper assures the students that they can keep Ellie calm with punk rock music.  Later, as April leaves the zoo, she notices several Kraangdroids using a mobile mutation bay.  They plan to mutate all the animals in the zoo, starting with Ellie.  April contacts the Turtles on her T-Phone, but knows they won’t make it in time to save Ellie. 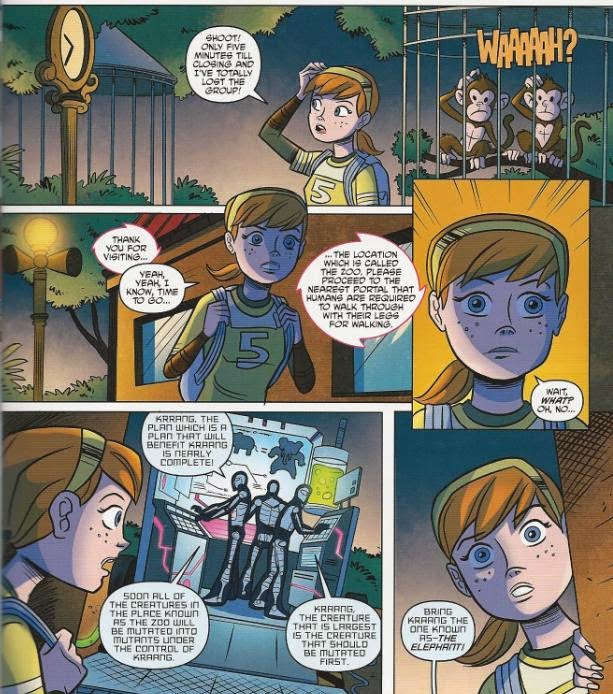 The Turtles hurry to the zoo, but get caught by the Kraangdroids in the sewers.  They fight their way to the aquarium above, but are eventually captured.  April, meanwhile, is keeping to the shadows while trying to formulate a plan.  The Turtles show up as prisoners and April realizes it’s up to her to save the day.

She knows she can’t defeat the Kraang by herself, but once she sees that Ellie looks distressed (following the signs the zookeeper explained), she figures Ellie can do the work for her.  Using a pencil like a dart, she hits the control panel and releases Ellie from her shackles.  The rampaging pachyderm trashes the Kraangdroids and then goes for the Turtles.  April tells the Turtles to hold their weapons and grabs Mikey’s T-Phone.  She plays his favorite punk rock song and it lulls Ellie into a nap. 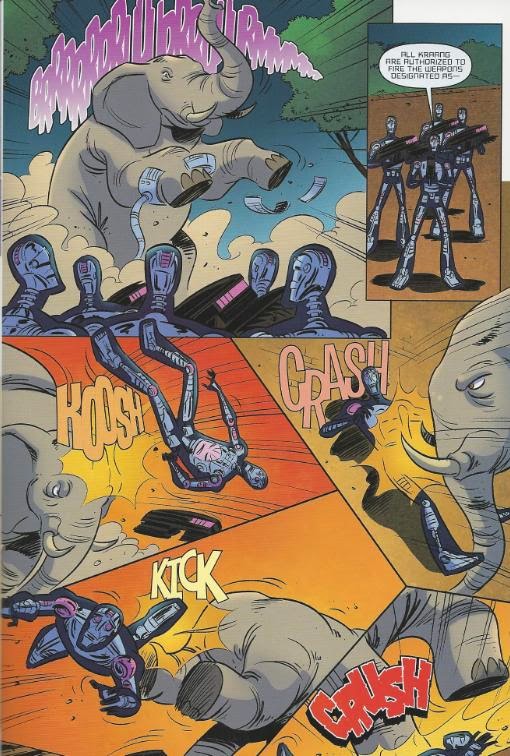 The Turtles all compliment April on her fine ninjutsu skills, having kept completely out of sight, using stealth and guile rather than brawn to defeat the Kraang.  April admits that it was her formal education that truly won the day, not her ninja training, and concedes that going to school is just as important as practicing martial arts.  She and the Turtles then decide to go on a private after hours tour of the zoo.

*This story is continued from TMNT New Animated Adventures #12.  The story continues in “Lesson Learned”.

*Coincidentally, TMNT Magazine (Panini) #16, which came out the same month as this issue, ALSO featured a story where the Turtles try to keep animals at the zoo from getting mutated: “One False Move”.

Hey, déjà vu!  It’s weird when the IDW's and Panini's TMNT comics align and hit the same beats.  While this issue and “One False Move” came out the same month and share basic similarities, it happened once before with TMNT Magazine (Panini) #2 and TMNT New Animated Adventures #2.

Anyway, all trivial coincidences aside, “April’s Way” is one of those stories that takes the need to serve a life lesson to the kids a little too seriously.  While kid’s media sort of comes with the expectation that it must contain educational content, does it… does it have to?  I dunno, “what I learned today” stories haven’t exactly been the norm for TMNT New Animated Adventures, so I guess it just happens to stand out amongst the catalog so far.

But yeah, “April’s Way” has a lesson to be learned and one I think even the thickest of kids would find boring.  “Stay in school”.  “Studying is important”.  “Book-learning can be as cool as martial arts”.  “An elephant never forgets… to kill”.  And so on.

I’m not a kid anymore, but thinking back to when I WAS, I could always tell when a cartoon or comic was trying to teach me something.  This issue basically ends the same way every episode of ThunderCats used to, with the characters all congregating to discuss the moral of the story and spell the lesson out for the tykes.  You know, just to make sure they didn’t miss anything.

And I suppose that’s where “April’s Way” truly falters.  Including messages and lessons in your stories is A-OK, but it’s sort of an art in and of itself.  Allegories cease to be allegories when the characters fall just short of directly addressing the audience and asking “so, did you get all that?”  The story’s message about staying in school and doing your homework would have gone over much better if the characters hadn’t all spelled that message out in plain language on the final page.  Kids are smarter than adults give them credit for and they can get the gist of an allegory without being talked down to.

There are also some lettering errors (page 5, “If can’t fight them head on…”) and some coloring errors (page 8, the mutagen is green when in the show it’s supposed to be purply-bluey).  Those don’t really do much to help things.