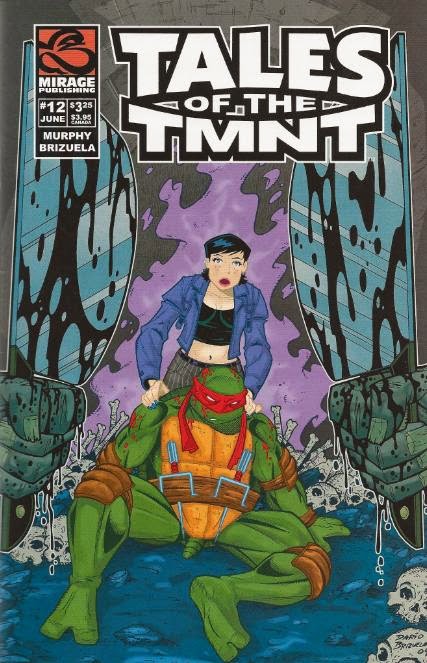 Frontispiece: The Turtles are crawling out of a storm drain in Paris.  It’s raining cats and dogs and Raph is miserable.  He says that the mission they’re on is serious, but he doesn’t expect it to be as nasty as his FIRST visit to Paris…

April, 2002.  Shadow is flying over the Pacific with her honors French class for their annual class trip to Paris.  She laments that she has to spend such an exciting vacation with a bunch of conformist nerds who all dress from the Gap and aren’t cool ninja rebels like her, BUT she is glad that she gets to go alone this year.  Little does Shadow know, Raphael has stowed away in the cargo hold to secretly keep an eye on her. 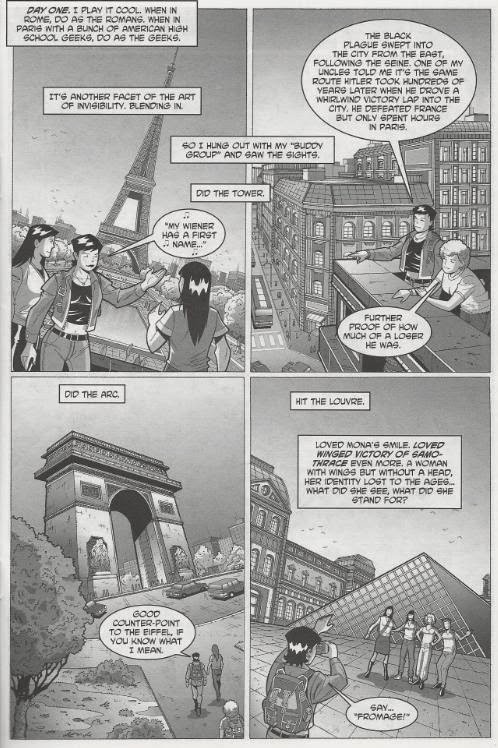 After arriving in Paris, Shadow tours the city with her classmates, all the while pretending to be friends with them and putting on the dumb American tourist act because “blending in” is part of her ninja training.  Meanwhile, Raphael trails her through the city’s conveniently labeled sewers.  Down there, Raph feels like a shadowy form is following him.

At the Notre Dame cathedral, Shadow finally ditches all the conformist Gap kids and goes exploring on her own.  She finds the catacombs on Place Denfert-Rochereau and checks them out.  In the darkness she’s met by a local named Jean-Louis, a polite and handsome young man, though all Shadow cares about is his lame haircut.  Jean-Louis warns her that her uncle is in grave danger and should have never come to France.  Shadow is weirded out by this and leaves.

Having gotten lost in the sewer thanks to several dead ends, Raph surfaces into an alley.  He’s met by a tall, shadowy figure wielding a pair of meat cleavers.  The figure knocks him over the head with the handle and disappears.  As Raph comes to, he’s accosted by the police, who mistake him for “the Beast”.  They shoot Raph in the shoulder, but he escapes. 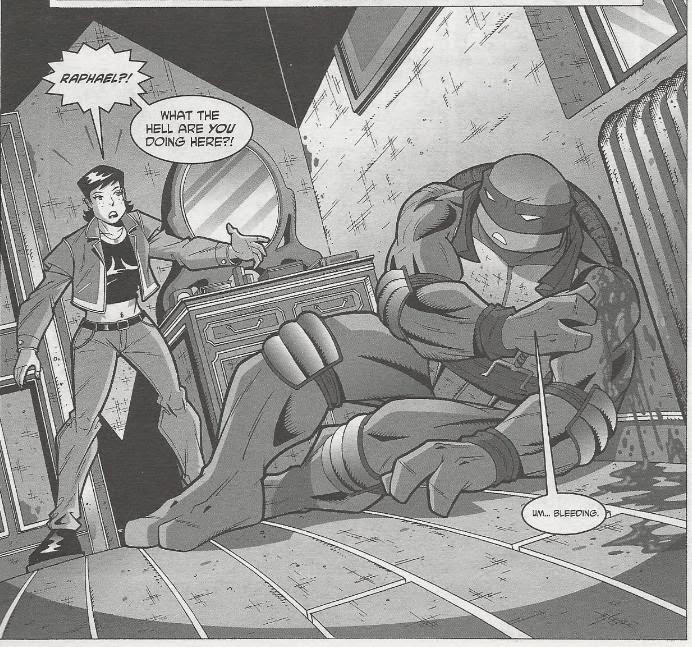 Shadow returns to her hotel room and finds Raph waiting for her.  After some explaining, Shadow tends to his bullet wound while Raph reads the evening edition of the local paper… and sees his photo identified as the Beast.  Raph passes out and when he wakes up the next evening, he checks the latest paper.  He learns that two more teenage girls were killed by the Beast last night.  He also finds a note from Shadow saying that she’s going back to the catacombs to talk to Jean-Louis.  Fearing for her safety, Raph heads out, though he’s spotted by cops who give chase.

In the catacombs, Shadow demands answers from Jean-Louis, though he tries to warn her that now SHE is in danger as well as her uncle.  Suddenly, a wall connecting to the sewer explodes and out pops the Beast: Two men, one carrying the other on his shoulders, wielding meat cleavers.  They chase Shadow, but Raph shows up in time to fight the Beast.  The Beast knocks him senseless with the handles of the cleavers, but before they can chop Raph up, Jean-Louis distracts them.  Then the cops arrive and shoot them in the back.  Shadow and Raph sneak out through the sewer, not even having the time to thank Jean-Louis. 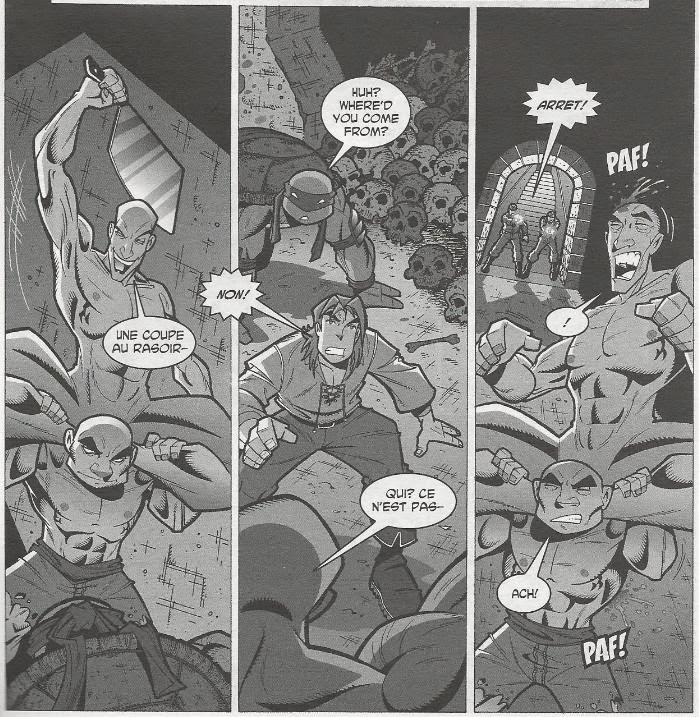 At the farmhouse in Northampton, Raph comes to see Shadow with tidings from Donatello.  Apparently, after hearing the story, Don decided to research the catacombs and found an old newspaper from 1870.  In it is a photo of Jean-Louis, taken shortly before he was murdered in the catacombs.  Shadows quietly thanks the boy for watching over her and her uncle.

*Shadow was forced to move to Northampton after the events of Tales of the TMNT (Vol. 2) #7.

*This issue also featured an interview with Dario Brizuela.

From the letters page of Tales of the TMNT (Vol. 2) #10, the words of Steve Murphy: “My opinion on fashion and style is this, though: I think the way most Americans dress is horrible; casual, sloppy, call it what you will, it’s generally pretty gross.  While not a slave to fashion I do think we should all have a precision about presentation.  It’s more civilized.”

Alright, let’s talk about the difference between “characters” and “mouthpieces”.  A character is a fully formed fictional individual with their own unique attitudes and opinions which breath into them the illusion of reality.  A mouthpiece is a shallow conduit for the attitudes and opinions of the writer, who is incapable of separating themselves from the persona they’re crafting and prefer to use these artificial individuals as a means to legitimize their personal agendas.

More often than not, Steve Murphy writes mouthpieces, NOT characters.  And the Shadow who appears in this story is one of those cases.

Murphy had a habit of using the opening editorial and letters page of Tales of the TMNT as his own personal blog to talk about politics, activism or just whatever was getting his goat that day.  One of the irritations he enjoyed admonishing that nebulous entity known as "Americans" about were the way they dressed.  He felt that Americans dressed like slobs or like conformists and detested the fashion-illiterate people of the United States.

So guess what Shadow’s opinions on American fashion are?

Now, I don’t really care one way or the other if Steve Murphy thinks I dress like a slob.  If some shallow, scrutinizing know-it-all from New England thinks my t-shirt and jeans are a travesty, it’s no denim off my Levis.  No, the problem I’m trying to articulate here is that Murphy puts his personal opinions BEFORE the development and voice of the characters.  When Shadow talks in this issue, it isn’t Shadow’s voice… its Steve Murphy’s.  Because Shadow in this issue is not a character, she’s a mouthpiece.

Perhaps if Murphy had never used the letters page and opening editorial to preach his disgust with American fashion, I’d have never known that Shadow’s and his opinions miraculously aligned and the concern wouldn’t be apparent.  But the fact remains that he did, making it evident that Shadow’s seemingly random rants about the Gap, American conformism, geeks who don’t know how to dress themselves and the genetic superiority of Europeans in regards to designer clothing lines… Those are the words of Steve Murphy, not Shadow Jones.  And when you’re reading a story and all you can hear is the writer’s voice, not the character’s, it takes you right the fuck out of the experience.

But let’s feign ignorance and try to look at the story without the knowledge that Shadow is just parroting Murphy’s opinions.  Shadow is positively incorrigible in this story and she learns no lesson and receives no humbling comeuppance to take the edge off her earlier behavior.  The issue opens with her going on for page after page about how disgusting Americans are.  As she tours the streets of Paris with her classmates, who are all being nice to her and think of her as a friend, her inner monologue continues to chastise and scrutinize them as being geeks and losers and unworthy of her camaraderie.  She takes pride in the fact that she’s only pretending to be their chum as an exercise in ninja disguise and gleefully abandons them at the first opportunity, because she is just a fucking terrible person.

Where it gets worse is that, like I said, it isn’t framed that way; for you to think she’s an awful piece of crap.  Her “friends” don’t come to her rescue, her supposedly superior fashion sense isn’t revealed to be out of date and square, she is never once called out for any of the terrible things she says or does.  She gets in trouble for going it alone, but that has little to do with the way she was behaving or the people she was abusing earlier.

And the reason is because her opinions expressed at the beginning of the story were Steve Murphy’s opinions, so therefore she was justified in her behavior and everything she said and did was “right”.

Whoops!  I know I said I would try to separate the writer from the character, but that’s a lot harder than I thought it would be considering the character IS the writer in this instance.

But that’s what really brings “Paris Nocturne” down.  The vague plot summary about Shadow going to Paris, meeting ghosts and getting attacked by a weird serial killer called the Beast… that all sounds pretty cool.  But the writer, so utterly incapable of missing an opportunity to express his personal opinions about every little fucking thing, ruins the entire outline by vicariously expressing those opinions through the mouths of the characters.

And as far as Shadow goes, she never acts like this in any story by any other writer.  Thanks to the hard date at the beginning, we know “Paris Nocturne” takes place during the time skip in Volume 4.  But read Shadow in all those Volume 4 stories surrounding this one.  She is not an incorrigible elitist in any of those adventures.  Read other teen Shadow stories by other writers.  She’s perhaps stubborn and a little bratty, but she isn’t like this.

It’s so bad that in Tales of the TMNT (Vol. 2) #69, an adult Shadow looks back on her behavior in these stories and apologizes.  But she isn’t apologizing for herself, she’s apologizing for Steve Murphy.

Grade: D (as in, “Do the French even like Ninja Turtles or do they just read Tintin comics?”)
Posted by TMNT Entity at 10:45 AM