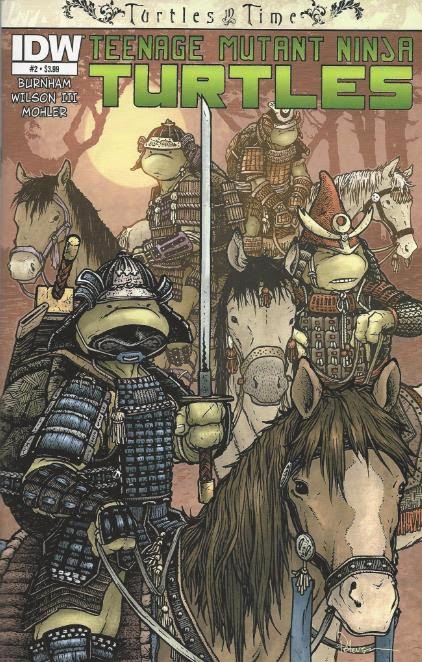 The Turtles arrive in Feudal Japan thanks to Renet, however, she still can’t get his time scepter working right and vanishes.  The Turtles decide they’re too conspicuous in this era, so they steal four sets of armor from some bathing samurai and disguise themselves.  Nearby, a traveling Hamato Yoshi is attacked by several members of the Foot Clan.  They come with a warning from the Jonin (Oroku Saki), who is displeased that Yoshi continues to openly contradict him, and so they intend to beat the message into him. 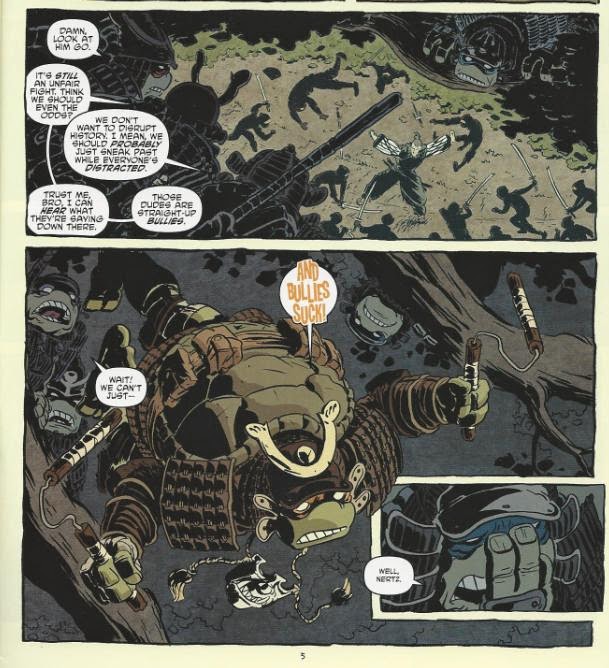 The Turtles see this going on and intervene, both beating up the Foot ninja and also scaring them away by looking like demons.  Michelangelo, the only Turtle who can speak Japanese, assures the man they saved that they mean no harm and he in turn introduces himself as Hamato Yoshi.  The Turtles are shocked and quickly keep their masks on so that he won’t “recognize” them in the future.  Yoshi invites them back to his home for supper. 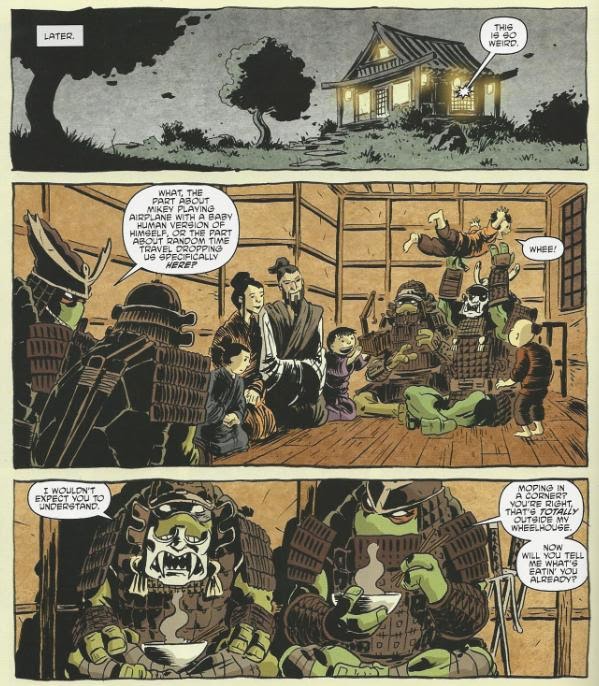 As Don and Mikey play with their younger human incarnations, Leo begins to look troubled.  Raph asks what’s wrong and Leo recalls the fate that will befall their younger selves if nothing is done to prevent it.  Raph nixes the idea of messing with history, but Leo can’t let it go.

The next morning, Leo has disappeared.  Raph suspects what he intends to do and Mikey gets directions to the Foot clan’s compound from Tang Shen.  Mikey gives his mom a hug goodbye and then they take off on some borrowed horses. 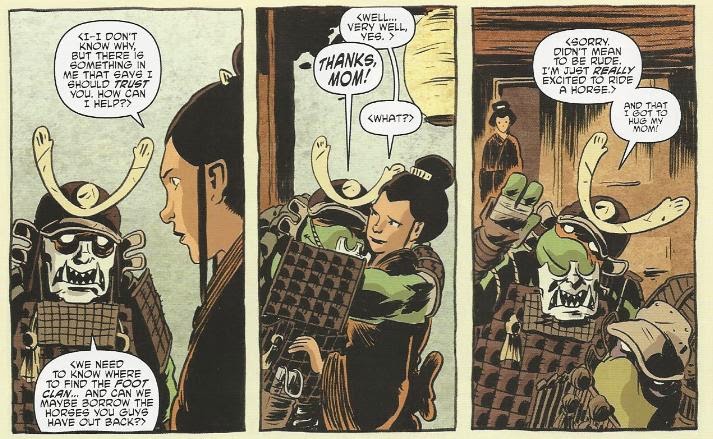 At the Foot compound, Oroku Saki is about to slay a ninja named Kimura for failing in his assignment.  Leo intervenes, saving Kimura and challenging Saki.  Saki can’t understand English, obviously, but the “demon’s” intent is clear and the two fight.

Outside, the Foot thugs who attacked Yoshi are standing guard when the Turtles show up on horseback.  Don and Mike keep the hordes of Foot ninja busy while Raph infiltrates the base. 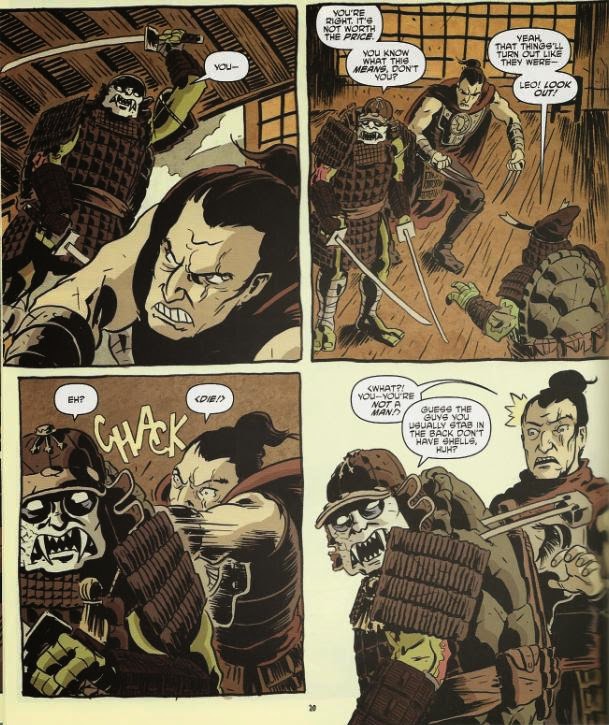 Leo is in the middle of a suicide attack.  Unable to beat Saki, he intends to take the Jonin down with him.  Raph interrupts and warns Leo not to go through with this.  Yes, he’ll be sparing their previous lives, but what about all the lives they saved in New York after their reincarnation?  And who will stop General Krang and the Technodrome project?  Leo realizes he can’t trade all of those responsibilities for his own second chance and relents.  Saki plants his gauntlet blades in Leo’s back, but his shell absorbs them.  Saki is left open to a kick from the Turtle and is knocked out.  The Turtles then blip out of Feudal Japan the same way they got there.

Later, Saki seeks counsel from Kitsune, wanting to know what the “demons” had truly intended.  She suspects that they were an omen, warning him of a traitor in the Foot Clan’s ranks.  As Saki stares through a window at Hamato Yoshi, he resolves to eliminate any dissension within the Foot, no matter how small.

*Mikey discovered he could understand Japanese in TMNT: The Secret History of the Foot Clan #4.

*Hamoto Yoshi, Tang Shen and his sons were killed in TMNT (IDW) #5.

*This issue was originally published with 2 variant covers: Regular Cover by David Peterson, and Subscription Cover by Wilson III and Mohler.

This second installment of Turtles in Time is much less playful than the first.  It features a fresh creative team, so it’s only natural that the tone is entirely different.  There’s an anthology aspect to Turtles in Time which I’ve been enjoying; each issue is relatively standalone and features different creators playing around with the idea.  Even when it goes into darker territory, such as with this chapter, it’s still rather fun.

Erik Burnham digs back into the Feudal Japan stuff that has been a cornerstone of IDW’s TMNT universe; a cornerstone he helped mold with his Secret History of the Foot Clan miniseries.  As such, the tale weaves into all the Feudal Japan stories that have dotted the series, though he does so in a way that doesn’t require a spreadsheet of continuity timelines and a ledger packed with editorial notes; “see this issue, see that issue”.

While it operates by relying on the readers to know the general back story of the TMNT’s reincarnation origin, the other references are natural and don’t distract.  If you’ve been reading every issue since the start, you’ll see them.  If you haven’t, they’ll go unnoticed as “references” and simply feel organic to the story.

Leo’s dilemma is understandable, and though at first it seems like he contracts a momentary case of the stupids, you do sort of have to appreciate the “this is my one chance” opportunity he’s pressed with.  It’s not like he’s ever going to get a do-over on this.  The resolution is problematic, I guess, because right from the start we know how this is going to turn out.  OF COURSE Leo isn’t going to kill Saki and prevent the Ninja Turtles from existing because Previews says there’s still a TMNT comic being published next month.  While it undercuts the suspense, the emotional core of the situation is still there.  Really, Leo is just sort of raging against the machine; he can’t beat the Shredder, he can’t change history, and everything he does is ultimately fruitless.  So yeah, he’s a little frustrated.  In fact, his behavior is what inspires Saki to go from “warning beatings” to “execute the infidels”.  So, you know.  Good fucking job, Leo.

This is artist Charles Paul Wilson III’s first full issue since way back when he did TMNT Micro-Series #5: Splinter.  That was another Feudal Japan flashback story, so he was a natural fit to return for this adventure.  I almost didn’t recognize his lines at first because the colors in the Splinter micro (by Jay Fotos) were extremely different from the colors here (by Jeremy Mohler).  Mohler’s colors are flatter and cleaner without the “oil painting” effect that Fotos gave Wilson’s previous effort.  If anything, it’s an educational exercise in how an artist’s work can look so starkly different based entirely on the whims of their colorist.

But I’m not being critical; just bringing up an idle observation.  While Fotos’ coloring when applied to Wilson’s pencils complemented a more somber romance story in the Splinter micro, Mohler’s colors are heavier and make excessive use of shadows, complementing the darker tragedy of this particular story.  Wilson does a good job capturing the look and feel of the era (since he’s had practice) and there are several striking panels of both action (the TMNT and their various brawls with the Foot) and drama (the Turtles playing with their kid incarnation, Mikey hugging Tang Shen).

Overall, while I think I enjoyed the previous installment in Turtles in Time a bit more, this chapter is a completely different animal in terms of atmosphere and intent and stands up perfectly well on its own right.  It’s another fascinating peek at the Feudal Japan era of this TMNT timeline and every little bit is appreciated.

Grade: B (as in, “But the Foot call the Turtles ‘akuma’ instead of ‘kappa’.  Awwwww.  I know it fits in with their being referred to as 'demons' in this issue and all, but still.  Fumbled the ball at the 1 yard line for TMNT III references.”)