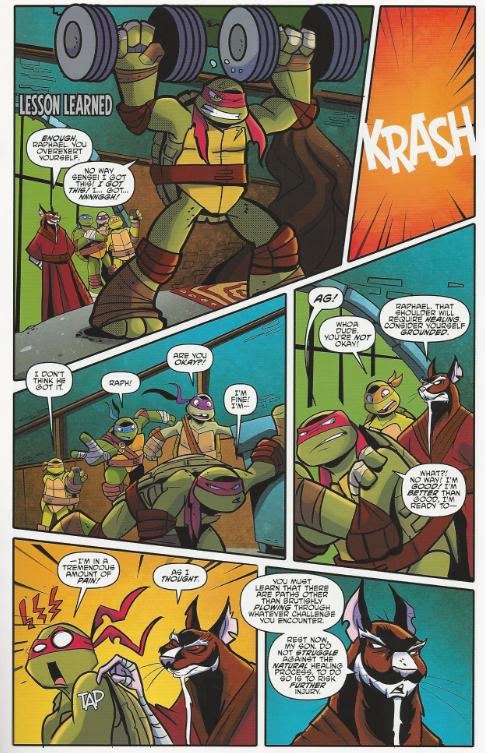 In the dojo, Raph is lifting an excess amount of weights and Splinter warns him not to overexert himself.  Right on cue, Raph throws out his left shoulder.  Splinter grounds him, telling him that it is his own fault for pursuing brawn over brains and that he must stay in the lair until he heals. 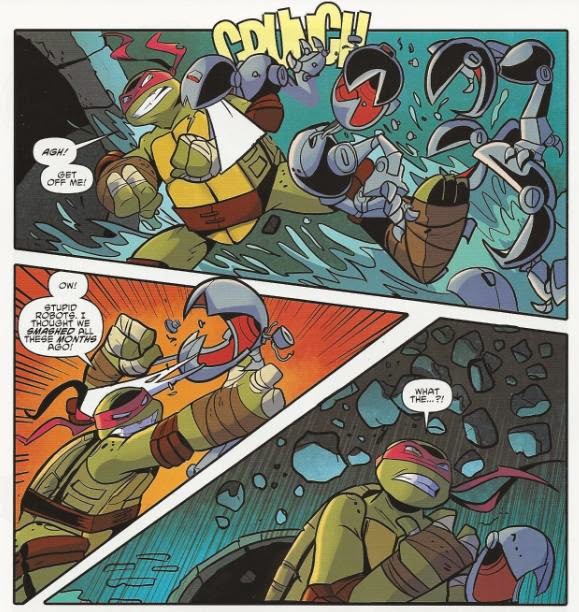 Later that night, the other Turtles go out on patrol and Raph wanders off down the sewer tunnels to sulk.  He’s suddenly attacked by a pack of mousers, but handily trashes them even with one arm.  Unfortunately, their digging causes a cave-in, trapping Raph in the tunnel.  He tries to send a signal to his brothers on his T-phone, but the damaged device shorts out.  With no choice, Raph has to think his way out of this predicament.

Grabbing one of the decapitated mouser heads, he fits it over his right fist and uses its hinged jaw and powerful teeth to break through the solid rock.  The other Turtles, following his partial T-phone signal, eventually find him after he’s dug his way through the rubble. 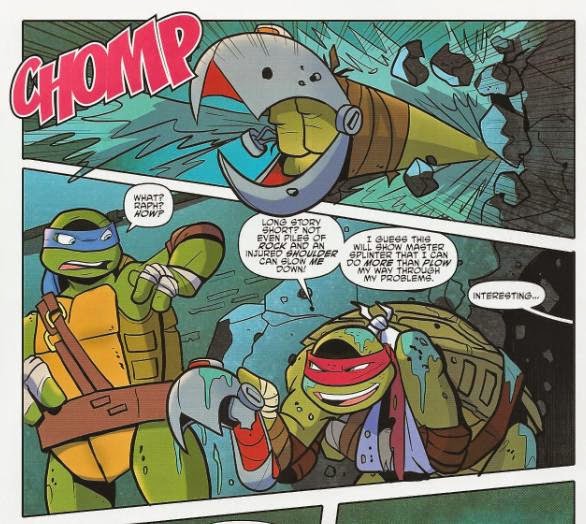 Later, at the dojo, Raphael explains to Splinter how he used his brains to get out of the cave-in.  Splinter tells him that all he did was find a new way to punch his way out of a problem, but he’s impressed with his son’s ingenuity regardless.  Unfortunately, Raph also disobeyed him by leaving the lair, so Splinter double-grounds him.  Raph protests until Splinter pinches his shoulder, causing the Turtle to pass out from the pain.

*This story is continued from “April’s Way”.  The story continues in TMNT New Animated Adventures #14.

*The Mousers first appeared in the season 1 episode “Mousers Attack!”

Like “April’s Way”, this is another story with an overt message to be delivered, making for a very education-oriented issue of New Animated Adventures.  That aside, it was fun to see the mousers again, as in nearly all universes they tend to vanish into the ether after they’re introduced.

What REALLY rocked about this story was the art from David Alvarez.  His style is really fluid and expressive.  The characters are constantly in motion and seen from more dynamic, perspective-enhanced angles that really makes his stuff pop.  Yeah, he uses the “anime” reaction faces I don’t like, but to be fair he’s just keeping in tune with the cartoon (which uses them too).  Hopefully we’ll see more of this guy.

Grade: B (as in, “But years of playing TMNT games on the NES left me with the impression that the mousers were a bigger deal than they ever were in the cartoons or comics”.)