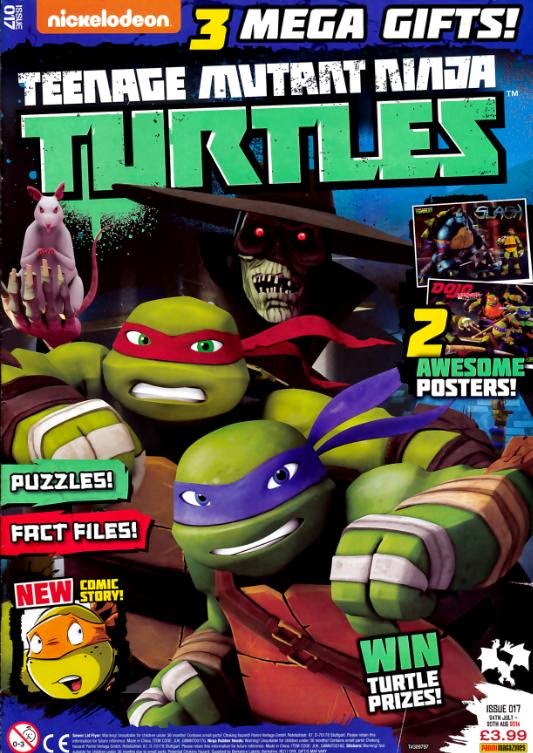 In the dojo, April is whining that she’ll never be ready to be a kunoichi.  Splinter tries to soothe her by explaining that no one is ever 100% ready for battle, but Raph actually agrees with April (much to April’s irritation).  He mentions all the times she was beaten by Karai and kidnapped by the Kraang and how she’s only been training for months compared to the years of training he and his brothers have had.  Donatello thinks he has a solution and asks April to test out his Threat Detection Goggles which can instantly analyze and assess potential hazards and enemies. 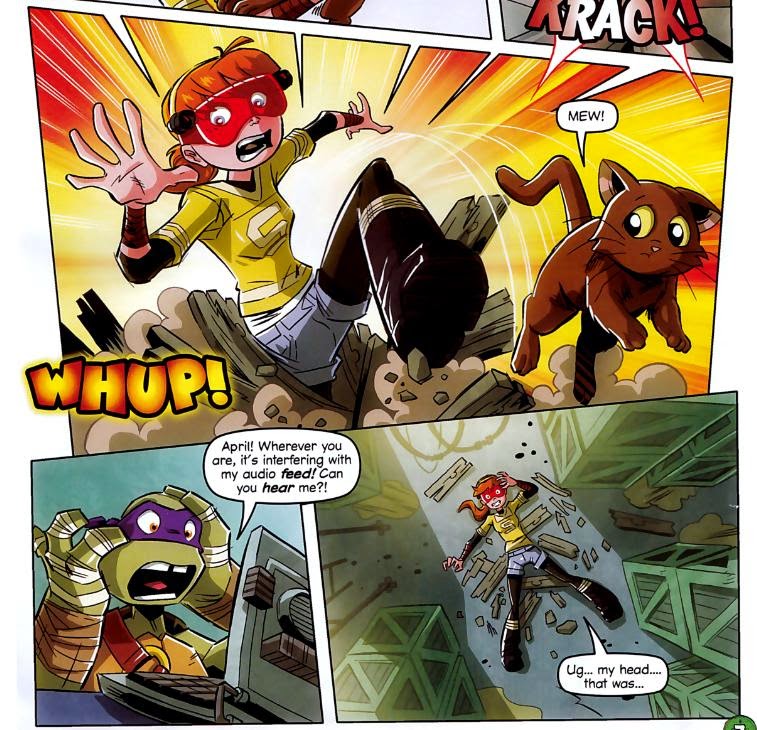 Later, April is running along the rooftops, testing out the goggles while Donnie remotely monitors her progress from his lab.  The goggles delay in warning her of a weakspot in the roof and she falls through… into a Kraang facility.  Donnie loses his feed and the Turtles rush to her rescue (Raph bitching all the while that they have to save April AGAIN). 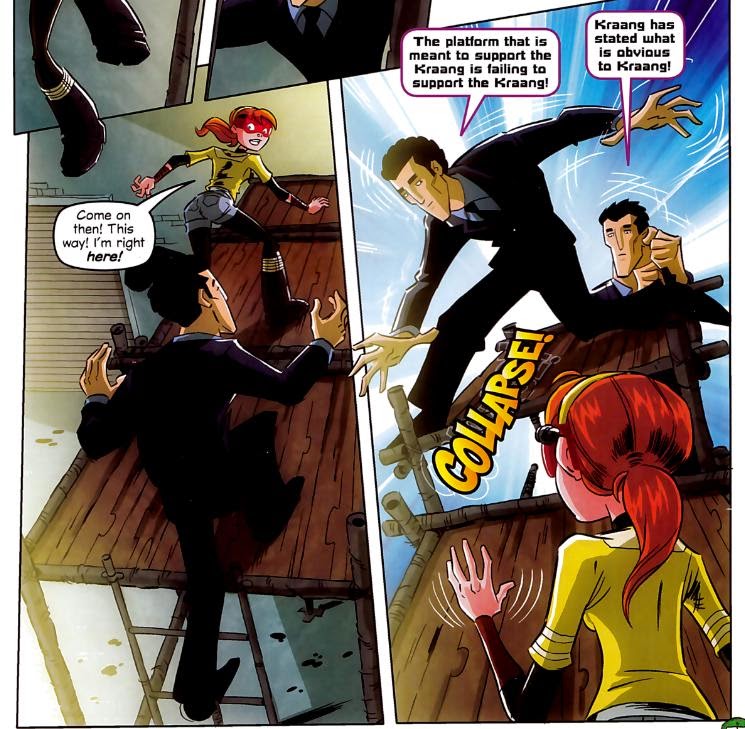 In the facility, the Kraangdroids attempt to seize April, who is hopelessly outnumbered.  The goggles begin to notice a number of environmental hazards and April figures she can use those threats to her advantage.  She tricks the Kraangdroids into knocking crates onto each other, bursting steam pipes, catching on live wires and, finally, climbing scaffolding that can’t support their weight and crashing to the floor. 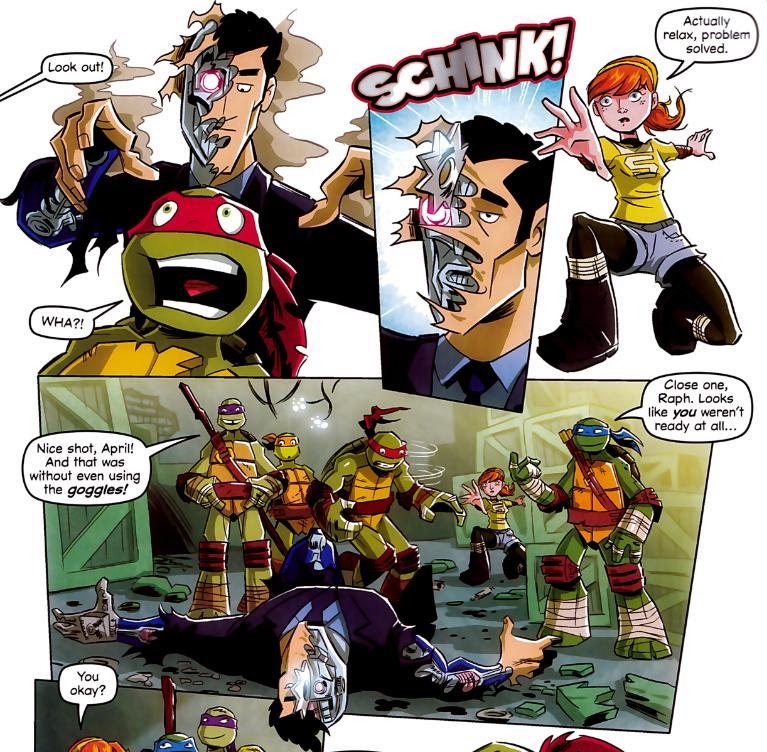 The Turtles at last arrive in the Shellraiser only to find that April has handled the Kraang all on her own.  As April takes off the goggles, Raph remarks that he STILL doesn’t think she’s ready.  Suddenly, a Kraangdroid attacks Raph from behind and April nails it in the head with a shuriken… all without the goggles!  Raph concedes that April is ready.

When reading my summary, you might imagine that there’s some big revelation about patience and diligence trumping technological crutches, or maybe some huge “girl power” moment to offset Raph’s (totally justified) dismissal of April’s ninja worth (hey, he made a solid point).  Those scenes are in the story, sort of, but they’re brief and organic to the adventure and don’t lay the lesson on thick.  In fact, there is never any admonishment about using the goggles to enhance your ability at all, just that skills earned through labor come in handy, too.

I think this script makes for a good example of how you can write a story with obvious morals (several, in fact), but not at the expense of the fun.  The educational content is there, it just isn’t… preachy.

Anyway, the story also made me think of Arkham Asylum, the Batman video game.  “World’s Greatest Detective”, yet he uses goggles in his cowl to make all environmental and logical assessments and collect all his clues for him.  Hey, I loved the game, but I just thought it was funny.  Likewise, April uses Donatello’s goggles to do all the work for her, but in tandem with her wit, so there’s an aspect of cooperation going on.  The goggles aren’t “doing the work for her”, but they are a tool that comes in handy and are treated as such.  Walker could have gone the obvious route with a big to-do about “I don’t need the goggles anymore!  That’s cheating!  I’m going to study harder and eat my vegetables!” but he relents and I thank him for that.

Anyhow, this was a good April solo story that felt well-balanced and honest in its characterization (though Raph plays butt monkey a bit).  April CAN’T be as good as the Turtles because all those points Raph brought up at the start are true.  However, she CAN hold her own in certain situations and her skills lay in areas other than brute martial arts.  This was one of those “make a case for the continued existence of a character” stories without falling into the traps and tropes of those sorts of stories, proving that even standard formulas can work if you handle the execution right.

Grade: B+ (as in, “Batman, why do you even bother having a switch that turns OFF Detective Mode?  Shouldn’t you ALWAYS be in Detective Mode?  That’s kind of the only way to play the game, anyhow…”)