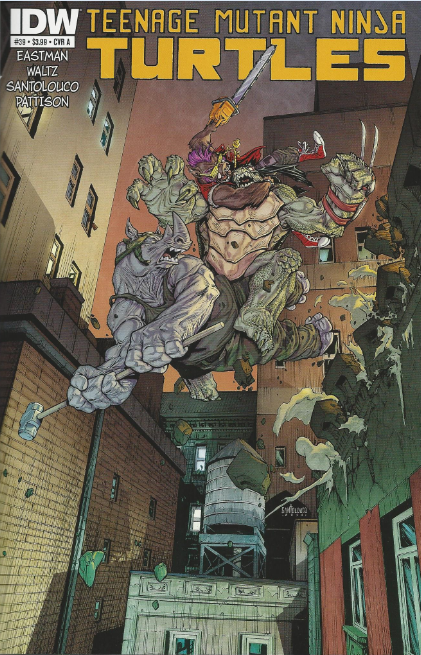 On the streets of New York, Bebop and Rocksteady are discussing taking Pigeon Pete’s offer to join Old Hob’s mutant army.  Seeing as how Karai got pretty mad at Koya for failing to kill the Turtles, they figure she wouldn’t be too thrilled with them doing anything behind her back.  In the end, they decide just not to tell her and knock over an ATM.  Unbeknownst to them, Alopex watches their every move. 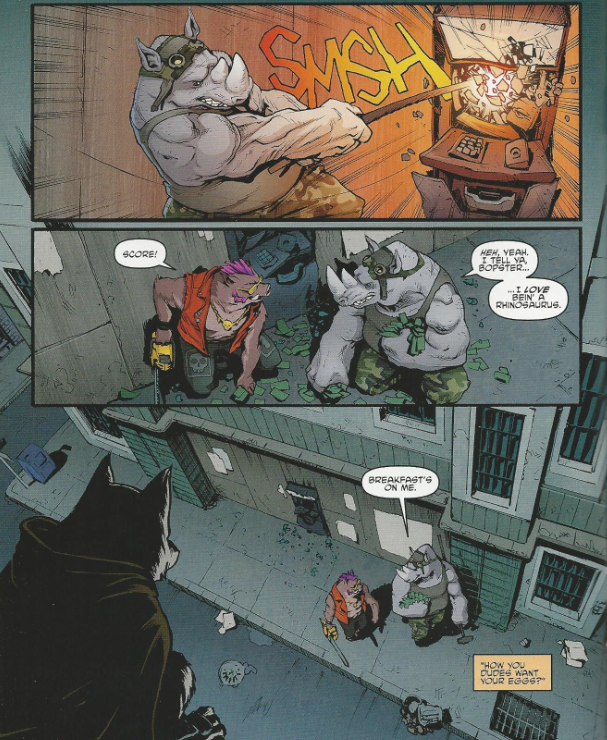 At the church lair, Splinter tells his sons that they can no longer wait to persuade Donatello to their side.  They must respect his choice to focus on the Technodrome issue while they proceed with their offensive against the Foot Clan.

At Harold’s lab, Angel wants him to upgrade the camera system in her Nobody getup so it can better track enemies (as they can’t tell from the video who saved her from a gun-toting thug).  Donatello then arrives and is furious to see that Harold has been spending more time working on the Nobody suit than the transmat.  As Angel leaves, she tells Donnie to go easier on Harold, as he’s been working his butt off trying to do both projects at once. 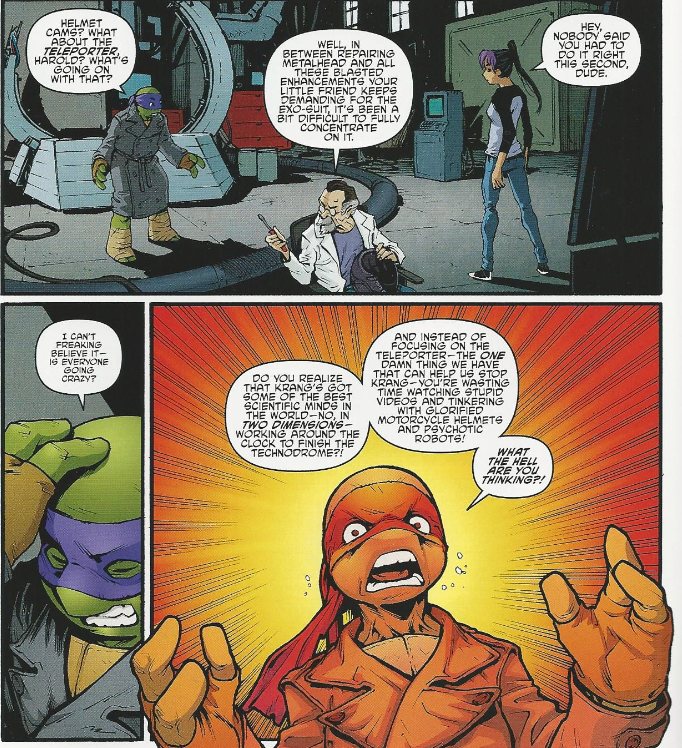 Donnie apologizes to Harold and shows him the latest transmission from the Fugitoid.  Apparently, General Krang’s recent altercation with the Shredder has encouraged him to speed up the Technodrome project, severely accelerating their own time table.  Don tells Harold that if he focuses more on the transmat, he’ll in turn take on the job of finishing Metalhead.  Harold agrees and with the notes from the Fugitoid he’s mostly completed decoding, he gets back to work on the transmat.

At the Second Time Around Shop, Casey has some quality time with April’s parents.  Using his inherent handyman abilities, Casey fixes a fuse in the kitchen and Mr. Jones asks if he can help with a few other odd jobs around the house.

Outside the Skara Brae, Angel bids her dad good night and is confronted by Alopex.  Alopex tells her that Bebop and Rocksteady are planning to ambush the Turtles.  Angel reluctantly agrees to follow Alopex after recognizing that she’s the one who saved her from the thug the other night. 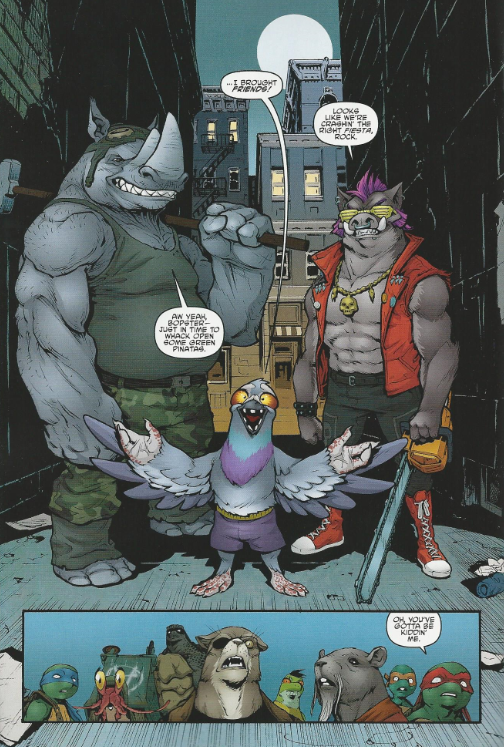 In an alley, the Turtles and Splinter meet up with Hob and his mutants.  Splinter tells Hob that he wants to take the offensive against Shredder and that they’ll need to work together to do it.  Hob isn’t opposed to the idea, but the negotiations are interrupted when Pete returns with Bebop and Rocksteady.  Hob is willing to allow them into his gang… until he finds out that they used to be human.  Hating humans with a passion, he orders his gang to kill Bebop and Rocksteady.

As the fight rages, Splinter tells his sons that they must side with Hob and his gang in order to preserve their necessary alliance.  Suddenly, Nobody and Alopex drop down into the alley to give the Turtles a hand.  Harold and April, meanwhile, watch the events unfold through Nobody’s helmet.  Harold suggests that Donatello go help his family, but Don passes on the opportunity, saying he has more important things to do as he continues his work on Metalhead.

*This issue was originally published with 3 variant covers: Cover A by Santolouco, Cover B by Eastman and Pattison, and Cover RI by Ulises Farinas.

“Mighty mutant animals”, huh?  I like where Hob is going with this.

This is Bebop and Rocksteady’s first real spotlight since “City Fall” and it’s great to finally catch back up with them.  Waltz seems to have a better handle on their voices than Dustin Weaver did in their Villain Micro and the pair have stronger personalities for it.  They speak with contractions, double negatives and slang, giving an all-around better sense of their IQs and attitudes than the bland generic-speak they used before.

And they’re still idiots, too!  There’s overt stupidity to them, such as their belief that they can hide their under-the-table activities from Karai, but I loved the more subtle bafoonery from the beginning of the issue.  They knock over an ATM to steal cash so they can buy breakfast… instead of just stealing food in the first place.  It’s the kind of dunderheaded thing those two would do, as they still aren’t grasping the full measure of their newfound powers and are, at least inadvertently, playing by society’s rules on a subconscious level.

I especially got a kick out of their reaction to Hob attacking them.  Their biggest grievance wasn’t that they were being shot, but because Hob was discriminating against them for being half-human, and gosh darnnit, that just isn’t fair!  Bebop and Rocksteady may be murderous psychopaths, but they don’t cotton to no racism!  Little touches like that retain their innocence and likability factor even when they’re full-on bad guys.

Other characters appeared in this issue, too!  Coming off of Turtles in Time #4, I think you can better understand Donatello's irritable attitude in this arc.  He just saw a horrible future he was partly to blame for and he feels the pressure is on.  One of the better elements from the early days of the IDW run was that DONATELLO was the rebel of the Turtles; stubbornly refusing to go along with Leonardo’s or Splinter’s plans because his innate skeptical nature made him question their wisdom.  That attitude is back on the forefront, as Donatello rejects what his brothers are doing and splits from the group to focus on the Technodrome project.

It’s a wonderful spin on the character and I’m glad to see it make a comeback after he’d been so agreeable for the past couple of years.  His heel-turn was worked into the tapestry of the overarching narrative (getting set up in the aforementioned Turtles in Time mini) and it doesn’t feel like an inexplicable resurgence of a forgotten trait, but one that’s been given just cause to slink back into prominence.

Then you’ve got Alopex making her move.  She’s trying to help the Turtles through Angel since the TMNT don’t trust her anymore (or at least she thinks they don’t) and its past time she got off the sidelines.  Presumably she’ll be hooking up with Hob’s “mighty mutant animals”, but we’ll see.

Casey and the O’Neil family have kind of been suffering these past few issues, stuck with a lot of doting around and mundane drama that stops the book dead.  With mutants and superheroes and ninjas and aliens running around, their shtick is kind of boring, though I understand the need for it to ground the narrative with some humanity.  But two pages of small talk over a broken coffeemaker felt like an eternity.

Anyhow, this continues to be a solid read from month to month.  The minis, too, have been having their impact on the main title and you can start to see it with this issue.  Even when the characters aren’t directly referencing their time-spanning adventure, the fallout in terms of character development is evident and damn, doesn’t that just feel really… substantial?  Boy it’s nice when a tie-in miniseries has a significant impact on the growth of a character in the main book.

Grade: A (as in, “And with all these mutants and weirdos running around, it’s becoming harder and harder to make a convincing argument against the inclusion of Pizzaface”.)