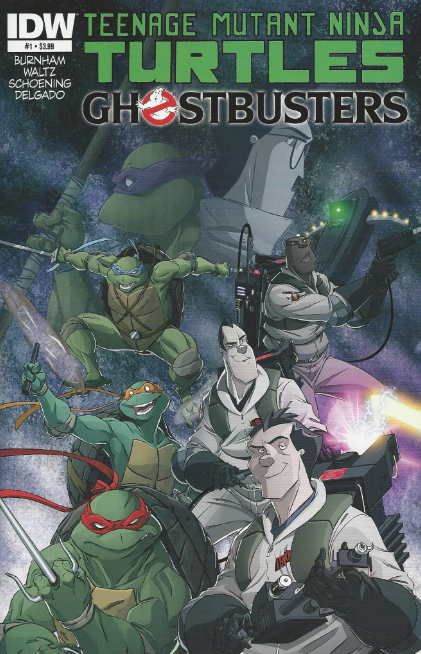 Japan.  The Muromachi Period.  Kitsune prays before the torri to open the gateway for the Iron Demon.  She’s approached by her brother, the ox-headed Chinese deity known as Chi-You.  Chi-You accuses her of breaking the rules of the “game” established between their family by manipulating demons when they’re supposed to stick to mortals.  Kitsune begins to insist that she’s within her rights when the Iron Demon (Krang) exits the portal with a canister of ooze.  Kitsune sees a chance to be rid of her brother and throws Chi-You into the gateway.  The Iron Demon tells her that the safeguards in his transmat technology will keep Chi-You from exiting the portal, trapping him in dimensional limbo forever. 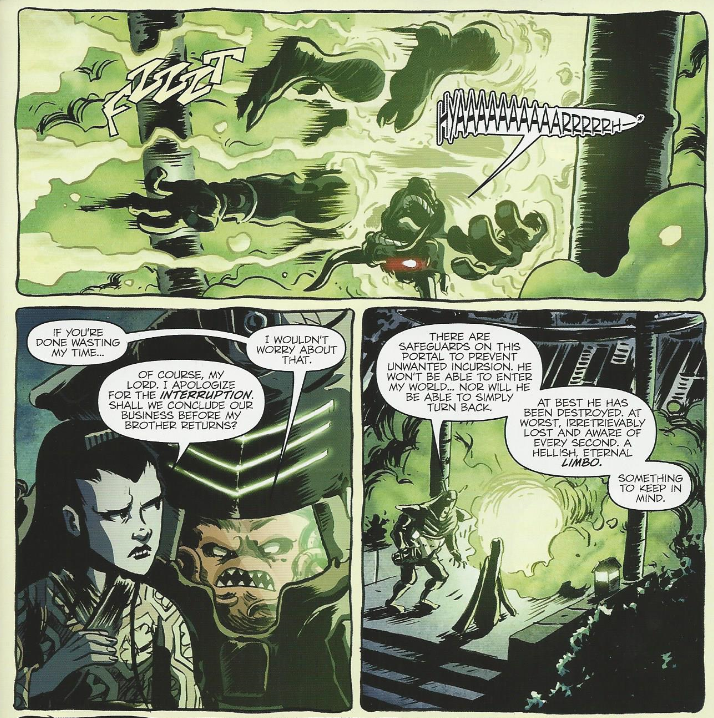 The present.  Harold Lillja’s lab.  Harold, April and Donatello have finally completed the interspatial transportation unit and tested it out for short distances.  Donnie invites his brothers, April and Casey to take the longest test by teleporting to the church lair to surprise Splinter.  As they step through the gateway, Harold swats at a fly and hits a button that recalculates the coordinates, sending the Turtles to who-knows-where. 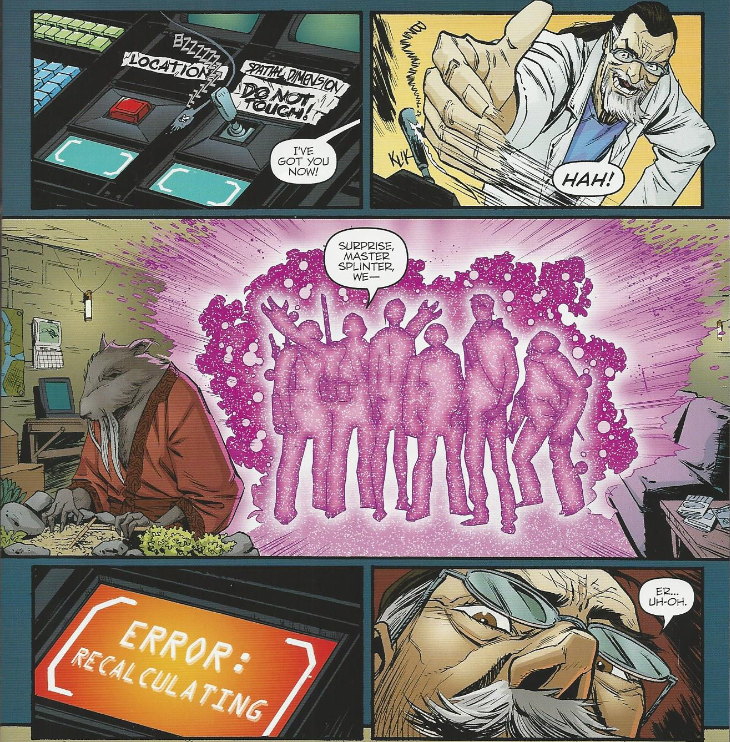 New York City.  Another dimension.  The Ghostbusters (Peter Venkman, Egon Spengler, Ray Stantz and Winston Zeddemore) finish trapping a class 5 spirit and pile into Ecto-1.  They receive a call from Janine Melnitz and Kylie Griffen.  Apparently, Egon’s dimensional inverter (a dimensional breach early warning device) has gone off (he built it after their recent spats with the Peoplebusters and Gozer) and the Ghostbusters follow the signal to see what the big deal is. 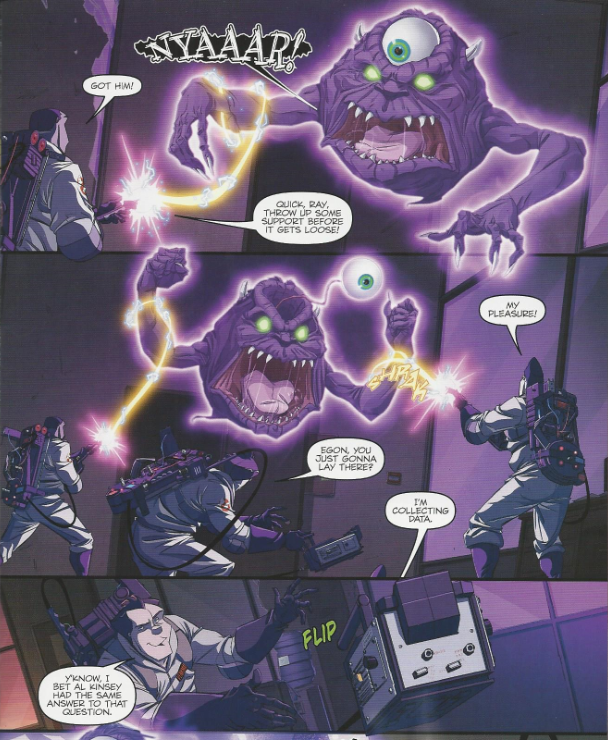 The Turtles and co. materialize in the church lair, but the one in this dimension, which happens to still be in use and with a wedding in service, no less.  The dimensional breach also allows Chi-You to break free.  At first he’s furious that he’s in the wrong dimension, but then he realizes that the energies of this new universe have increased his powers.  The Turtles try to fight him, but are woefully overmatched.  Chi-You then uses his powers to possess Casey and all the wedding goers, turning them into mindless slaves to his will. 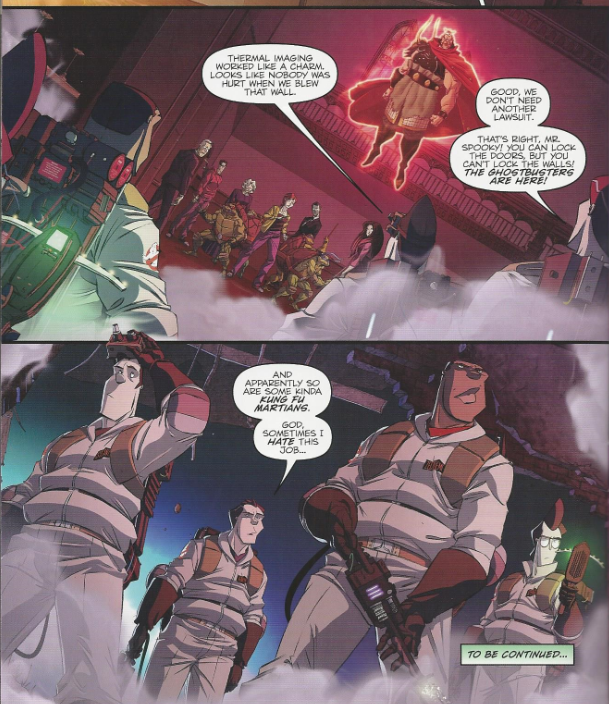 As the people attack the Turtles and April, the Ghostbusters come storming in and assess the situation…

*The story continues in TMNT/Ghostbusters #2.

*Kitsune began her pact with the Iron Demon/Krang in TMNT: The Secret History of the Foot Clan #1 (the prologue takes place sometime during that miniseries).

*The Rat King, the other sibling of Kitsune and Chi-You, revealed the “game” in TMNT (IDW) #36.

*An annotated Director's Cut edition of this issue was released in May, 2015.

So here it is: A dream come true.  The Ninja Turtles have just met the Ghostbusters and my inner seven year-old couldn’t be more excited.  Gratuitous crossovers tend to follow a predictable formula, and this one may turn out to be no different, but the thrill of seeing two properties you love interact is usually worth the clichés.

Now, in addition to IDW’s Teenage Mutant Ninja Turtles comics, I also diligently read all of their Ghostbusters comics and let me tell you: They freakin’ ROCKED.  Burnham’s and Schoening’s run on both volumes of Ghostbusters amounted to some DAMN good comics.  I keep using the past tense because, as of last month, the series is cancelled.  And during the brand’s 30th Anniversary, no less.  If IDW has any plans for the Ghostbusters beyond this miniseries, I do not know, but I can only hope.  And I can’t recommend enough that you check these comics out.  The first volume has recently been collected in a hardcover omnibus called Total Containment and it’s worth every penny.

Anyway, I just wanted to get it out there that I’ve been reading both books, so I wasn’t at any sort of disadvantage when it came to the continuity of the intersecting titles.  But for those of you who haven’t been reading one or the other book?  Or, god forbid, neither?  You might be at something of a loss.

Those who have been reading TMNT should be fine; the continuity of the Ghostbusters book so far extends only to some vague references of their recent encounters with the Peoplebusters and Gozer.  It explains why they have the dimensional breach warning system in place, but the references are slight.  You might wonder what that goth chick from Extreme Ghostbusters is doing there, but that's about it.

The Turtle continuity, on the other hand, is much less forgiving.  If the “TMNT” coming first in the title didn’t tip you off, this is more of an essential chapter in the chronology of the Turtles than it is the Ghostbusters.  So if you’re coming into this after having only read the Ghostbusters book, you’re just a little bit fucked.  It starts out knee-deep in “The Secret History of the Foot Clan” mythology, adding in the stuff the Rat King revealed during the “Monsters, Misfits and Madmen” arc, and hinges the whole crossover plot device on a subplot that began in the “Utrom Empire” miniseries and came to a head during the “New Mutant Order” arc.  So far as the Turtles go, this mini is MIRED in their continuity and you Ghostbusters fans are right to be head-scratching.

That said, I like how Waltz and Burnham have worked so much of the TMNT mythology into setting up this crossover.  As a reader of the IDW TMNT books I don’t feel like this storyline is inessential or a side story, but another vital step in the forward momentum of the series.  Admittedly, the reason for the Turtles to get lost in another dimension (Harold swatting at the keyboard) was kind of dumb, but I think it was intended as a tongue-in-cheek sort of thing.  The crossover between these two properties is so random to begin with, the stupidity of the story mechanic is an appropriate nod to the circumstances.

I haven’t much else to say about the story outside of the continuity between the books because this introductory chapter was all setup that used the continuity as a means to an end.  There isn’t much actual story yet to discuss.  But that’s a necessary evil of the crossover tale and one of the clichés I talked about in the first paragraph of this review (who wants to bet that the Turtles and the Ghostbusters will fight when they first meet due to a misunderstanding, but will eventually realize they’re on the same side and team up to save the day?).

Chi-You was a surprise inclusion; a creature of Chinese folk lore I wasn't too acquainted with until I read his wiki article.  I wonder how deep Waltz will end up going with this oddball "pantheon" of manipulative deities?  And how international he plans to get?  Kitsune comes from Japan, Chi-You comes from China and the Rat King comes from Germany.  It seems like there are plenty of options out there in the world of ancient mythology to expand their ranks.

Let’s talk about the art.  Three guys on this one.  Again, those who don’t read the TMNT book are at a disadvantage here, probably wondering why three people penciled this thing instead of one.  Those who have been keeping up with the TMNT books no doubt recognized the method to the madness and didn’t blink.  Basically, Charles Paul Wilson III has a history with the IDW TMNT book, often drawing the stories which take place in Feudal Japan.  Corey Smith is an alternating artist for the ongoing TMNT title, swapping out with regular artist Mateus Santolouco between arcs.  Dan Schoening, though, is the main artist for the Ghostbusters book (or was, anyway) and he’ll be the artist for the rest of this mini.  See?  It all makes sense.

Schoening’s style is a bit polarizing, I’ve discovered, but I absolutely adore his stuff.  Yeah, there are a few aesthetic choices that bug me (he overdetails the digits so everybody looks like they have granny fingers, all the women speak out of the sides of their mouths, he draws ears as itty bitty half-circles), but just because I don’t like SOME of his decisions doesn’t mean I don’t love everything else.  His style is heavily animated and it marries EXTREMELY well with Luis Antonio Delgado’s colors (which don’t get as much credit as they deserve).

Schoening is also an Easter Egg MANIAC and one of the most entertaining aspects of his run on Ghostbusters was going back and inspecting every page for the myriad in-jokes he slipped in for the eagle eyed readers.  In this issue, you’ll see the Bug-Eye Ghost from the old Kenner Real Ghostbusters toyline and the dimensional inverter was a staple of Egon's lab in the Real Ghostbusters cartoon (though Delgado miscolors it black rather than yellow).  There are really subtle Easter Eggs, too, like the Ghostbusters taking a case at the Daily News Building, which is located in the Turtle Bay neighborhood of Manhattan.

But perhaps more obviously, the wedding everyone crashes is between Irma and Howie from the Fred Wolf TMNT cartoon (with Vernon and Burne as groomsmen).  I wouldn’t take the Easter Eggs too seriously, TMNT fans, as Schoening includes them more for fun than canon (many of the Easter Eggs in the Ghostbusters comic make no sense in context and are just supposed to be a cute game of Where’s Waldo).  “Irma” is even addressed as “Lucy” by the wedding goers, so that should tip you off that it was just a gag and not “really her”.

There are LOTS more than just the ones I've listed, too, so be sure to take a microscope to each panel.  You'll find lots of nods, especially to fake products and props from the Real Ghostbusters cartoon (such as the beverage Yuppie Water from the episode "Short Stuff").

Anyhow, when I mute the hyperactive screeching of my inner seven year-old, I can see a few of the problematic factors in this crossover.  The learning curve regarding TMNT continuity is a little intimidating for the uninitiated and this first installment is heavy on the setup.  That aside, it’s still all very promising and those of you who HAVE been reading the Turtle books won’t miss a beat.  As for the rest of you?  Hey, these comics are pretty great.  Check em out.