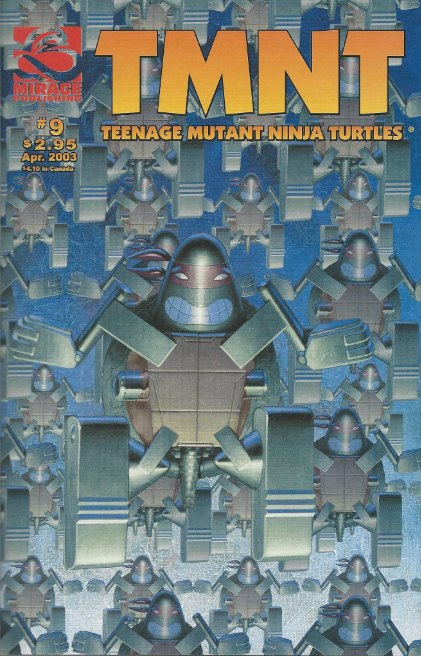 An Utrom scout ship arrives at the tepui in the Guyana highlands of Venezuela.  They’re in search of something that crashed there and the material it contained.  The trio of Utroms exit the ship but are immediately attacked by raptor-like creatures that all talk like Gollum from Lord of the Rings for some reason.  They devour Navigator Thurak and Science Advisor Shuthon, but Captain Glonar makes it back to the ship.  He sends an emergency message back to base, warning of the danger, before the raptors breach the hull and devour him. 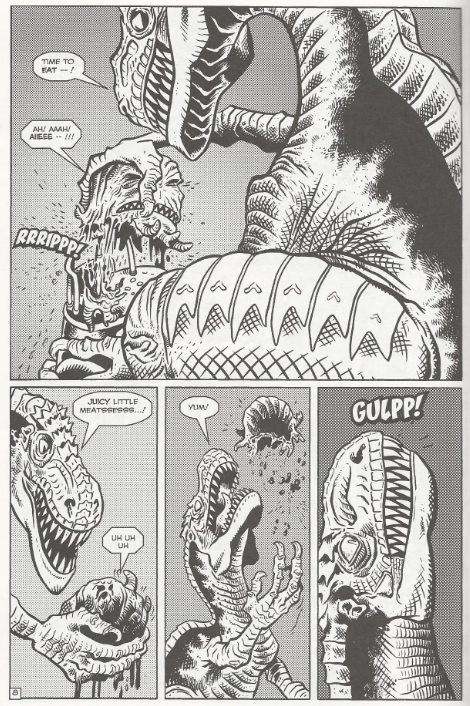 On the streets of New York, Donatello wanders around, stopping by an electronics store long enough to compliment Macintosh products for their superior design.  A little girl runs up to him, excited to meet an “alien”, and Don chats with her for a moment before telling her to stay in school.  He then descends into an open manhole. 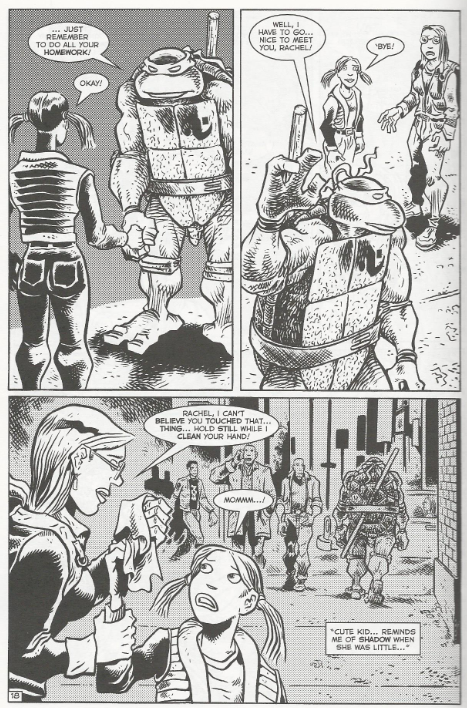 Don navigates the sewers until he reaches a secret room he hasn’t been to in years.  Opening it up, he is greeted by the remains of Baxter Stockman in his robot body, having been disabled and stored in the dark since their last battle.  Don kept him alive as he felt Baxter’s genius was too valuable to waste, but now he’s come to ask for answers regarding the nanobots Baxter infected April with.  Don pleads with Baxter for hours, but the evil genius won’t budge.  Finally understanding what a monster Baxter truly is, Donatello takes a Triceraton blaster and kills him for good, telling Baxter to “rot in Hell” as he leaves. 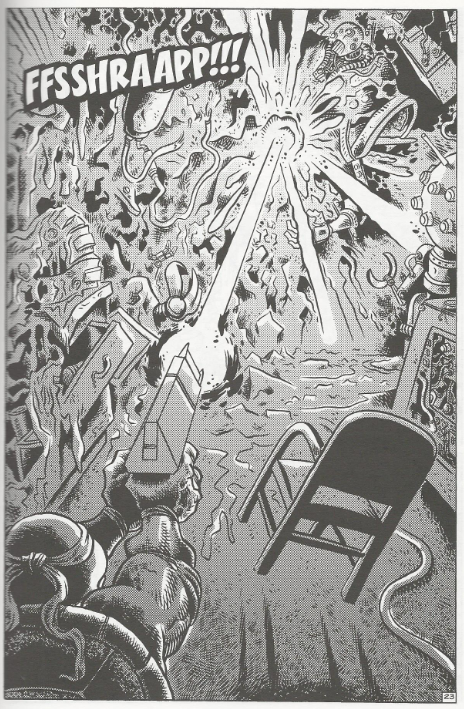 On the moon island, the Turtles, April and Shadow are all anxious for Don to get back so Glurin can start his demonstration.  Don arrives, but won’t say where he's been.  With Dr. Klynor’s approval, Glurin begins his proposal on how to save April’s life.

He explains that there are one million nanobots in her system and they’re eating her alive like a cancer.  They have tried different types of treatments, but these nanobots were built for industrial use and are too resilient; extreme treatments would prove fatal to April.  With no other recourse, Glurin suggests they fight fire with fire by injecting her with their own counter nanobot force. Glurin then reveals the Nanoturtlebots (nanobots designed to look like the TMNT).

*The explorers of the Venezuelan tepui disappeared in TMNT (Vol. 4) #3.

*Baxter’s robot body was destroyed and his brain went “missing” in TMNT (Vol. 2) #9.

*Depending on which continuity you ascribe to, Baxter Stockman was last seen either in Donatello: The Brain Thief #4 or TMNT (Vol. 3) #25.

This issue is such a mixture of good and bad I find it maddeningly polarizing.

To get the good out of the way, it finally picks up on the lingering story arc with the creatures in Venezuela.  That cliffhanger almost felt like a non sequitur, having not been so much as mentioned for five issues.

Then there’s Donatello’s discussion with Baxter Stockman.  When this issue first came out, it was truly thrilling to see Baxter again in the comic, even if only for four pages.  It sewed up the question of where his brain disappeared to from Volume 2 (though “The Brain Thief” miniseries would elaborate on that) and gave him a more personal sendoff than what he originally got.  I do wish the interrogation had gone on longer, but well…

God that scene is so bad.  You know the one.  Some readers suggested that I do a counter article to my “25 Greatest Moments in TMNT History” piece, showcasing the WORST moments in TMNT history.  I felt that would be way too negative a thing to write, but assuming I HAD penned such a vitriolic missive, I assure you, this scene would have been #1. 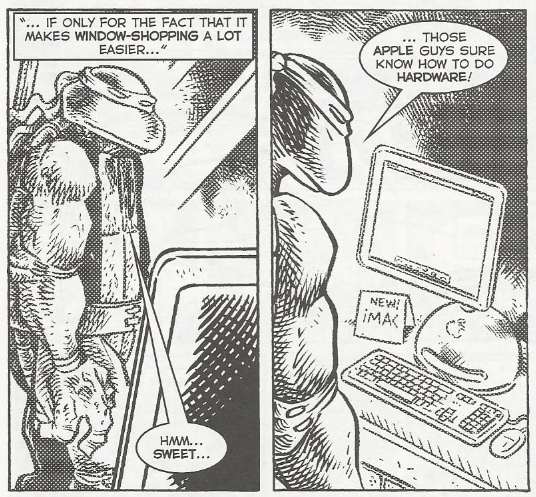 Donatello cold shilling for Mac.  It’s just random and stupid and takes a whole page away from the comic (a page that could have gone to his discussion with Baxter).  Laird loves Mac products and he often shilled for them in the letters page.  That’s fine.  It’s the letters page.  But when the characters stop what they’re doing and go out of their way to walk to an electronics store, look at a Mac product and tell everybody that it’s the best thing ever?  Holy shit, that’s just awful.

Later on in the issue, Casey is inexplicably wearing a Moto Guzzi t-shirt, representing for Peter Laird’s favorite motorcycle company.

Then there are the raptors on the tepui, all randomly talking in Gollum-speak, as Laird was on a serious Lord of the Rings kick after the Peter Jackson movies came out in '01.  It’s dumb and pointless and exists only because that was something else Laird liked and wanted to promote.

I get that this is Laird’s comic and he’s going to do what he wants.  That’s fine.  It’s his right as the creator.  But I still think pages like that fucking suck.

You’ll also notice a change in the attitude of the letters column.  This is the point where I think negative criticism had really begun to wear Laird down and he starts to take a very combative and irritated tone in his responses.  He hasn’t yet adopted the “don’t like it, don’t buy it” rhetoric that would become Mirage’s slogan in the 2000s, but he’s certainly not cheerful.

He dedicates a pretty long essay at the end of the 7-page (!) letter column with a message that boils down to “shut the fuck up”.  It’s pretty funny, though I think he missteps when he directs that message at not just the people who send him critical letters, but at the people he sees discussing his work on the internet.  Yeah, if someone directly sends you a message that insults you, then go right ahead and tell them to fuck off.  But really?  Saying that people having private conversations that you’ve gone out of your way to find and read should hold their tongues and keep their opinions to themselves?

Alright, man.  Whatever.  But if you’re allowed to shill for Mac and Moto Guzzi and Lord of the Rings in your comic, then people are free to trash talk shitty comics on their message boards and blogs and websites and whatever.  It’s a two-way street, dude.

But not to end this review on a negative note (I started out by saying that I didn’t WANT to get too negative!), I will say that I liked the stuff AFTER Don shilled for Mac.  The talk he has with the excited little girl.  One thing Volume 4 introduced that I really liked was the idea that the Turtles can walk the streets alongside humanity for the first time.  I love seeing them acclimate to that new lifestyle change and Don is basically tickled at the opportunity to talk to a little kid without them screaming and running away.  The mom wiping her daughter down with disinfectant was a little much, but I get that the point was to show the differing openness of the older and younger generations in regards to major social change.

Overall, this issue is a baffling mixture of the absolutely terrible with the pretty damn cool.  It’s kind of a rollercoaster.  “Alright!  We’re going to see what’s going on with the tepui subplot!  What the fuck?  Gollum-raptors?  Hey!  Don’s walking around in broad daylight; that’s awesome!  Wait, why is he stopping to tell the audience they should buy Mac products?  Holy shit, Baxter Stockman!” and so on and so on.