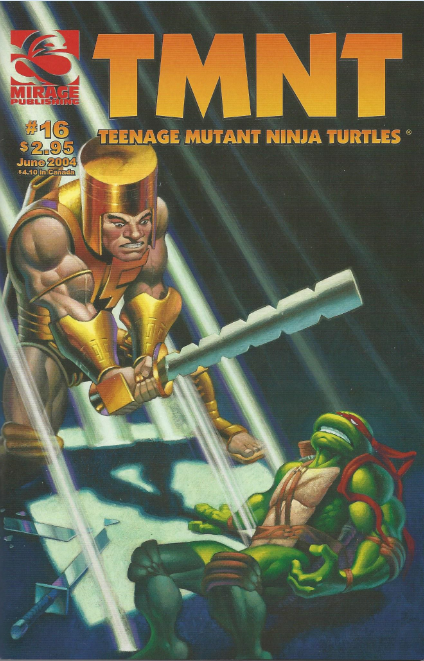 In the Foot warehouse, Leonardo takes the blow from the mystery warrior’s maquahuitl blade directly to his shell, but manages to absorb it.  They fight some more, but Cha Ocho interferes with a taser blast that stuns the warrior (and “accidentally” tags Leo).  As the Foot Soldiers bind the warrior, Karai removes the blade from Leo’s shell, determining that it came just short to breaching through the carapace and reaching his organs.  Looking at his broken katana, Leo decides to join the Foot in interrogating the warrior. 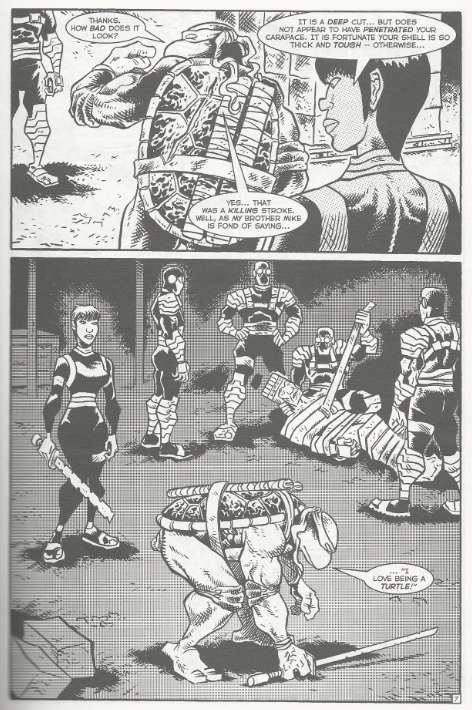 Marginal Way, Ogunquit, Maine.  Michelangelo and the Regenta go for a walk on the shore, chowing down on fried clams and getting to know each other.  They become more familiar as they talk and Mikey eventually drops formalities and speaks casually with her.  The Regenta then asks if he’d like to go for a swim. 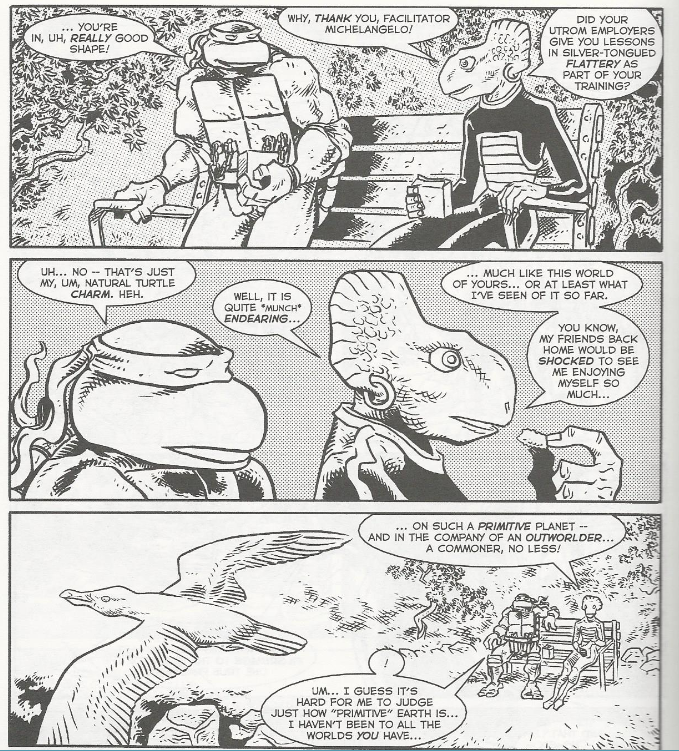 At the tepui, Donatello and the Utroms, inside the glass habitat, listen to the giant wood-creatures outside speak to them.  One of the Utroms says that it’s a rare Utrom dialect that they’re speaking and their words roughly translate to, “It took you long enough”.  The wood-creatures leave and Donatello introduces himself to the lost explorers: Ken, Simon and Beth.

As they head back to the explorers’ shelter, Don tells them of all the changes that have happened since they went missing.  Beth, in turn, tells him that they aren’t the only ones trapped in the habitat and that they need to stay in groups to avoid predators.  Don notices that there seems to be no scale to the plants and things inside the habitat; some are way too small and some are way too big.  Beth concedes that this lack of scale has made it impossible to determine if they themselves have been shrunk or if the wood-creatures have grown in size. 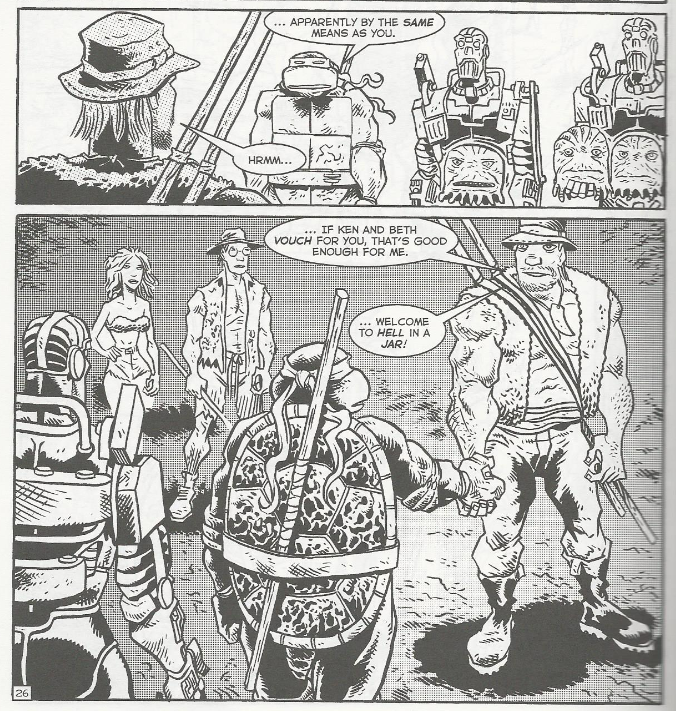 They reach the shelter and meet the other two explorers, Juan and Bob.  They happily welcome Don and the Utroms to “hell in a jar” and hope they can think of a way out.

In New York, a driver drops off a load of beef to a restaurant and returns to his truck, only to hear rustling in the back.  He grabs a tire iron to scare off what he thinks are hooligans, but discovers “Gameraph” chowing down on a side of beef.  The driver locks the door of the truck and runs off to call either the cops of the Xihad.  Raph escapes with the side of beef and takes refuge in the sewers where he falls asleep. 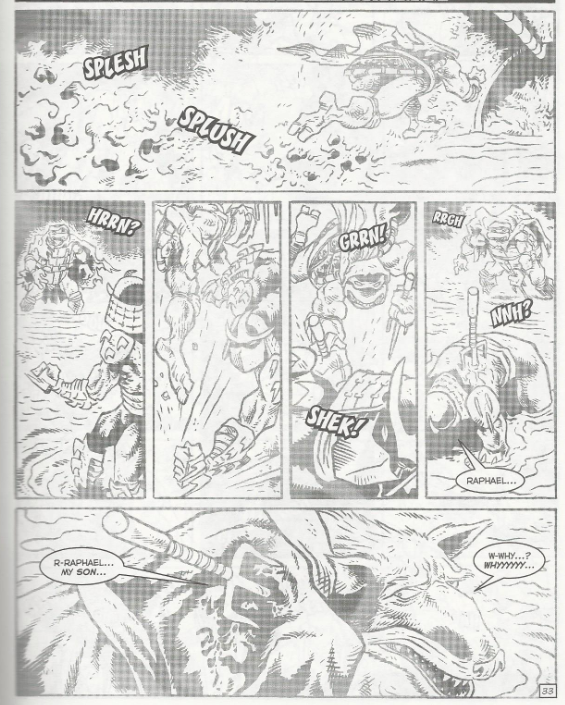 Raphael proceeds to have a distorted dream where he sees himself cira “Return to New York” battling the Shredder.  However, when he kills the Shredder, he realizes he’s actually killed Master Splinter.  He’s suddenly besieged by Baxter Stockman in his robot body, the goth vampires and even himself in the form of “Gameraph”.  They toss him down a pit and laugh at him as he plummets. 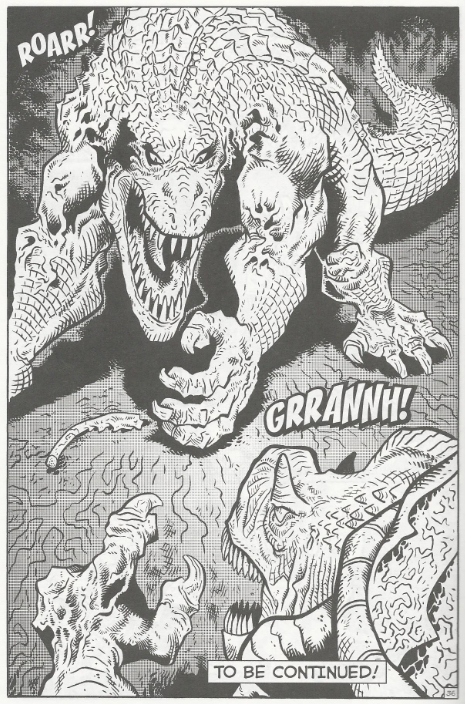 Suddenly, a hand reaches out to grab a chunk of meat.  Raph wakes up from this and prepares to defend his meal… from Leatherhead!

The opening fight between Leo and the mystery warrior is one of the better laid out fight sequences in Volume 4, I think.  If you go through a lot of Lawson’s mid-2000s work, you’ll notice that his fight layouts are rather bland; a lot of disjoined feints and blows scattered about through panels that aren’t arranged to accentuate any sort of kinetic flow.  They’re a far cry from his layouts during “City at War”, which are some of the best action layouts in comics, hands down.

BUT, that’s why fights like this stand out.  While it still suffers from some bland “punch-kick-punch” choreography, it’s a bit neater and there’s less disconnect from panel to panel.  I think what also helps is the whole “Leo with a sword lodged in his back” thing.  The warrior spends part of the fight trying to dislodge his blade, distracting him from Leo’s attacks but also causing Leo pain whenever he gets his hands on it.

There’s also the fact that it ends due to interference from the Foot, so the conclusion comes suddenly and not as a dragging brawl.  Cha Ocho being the one to zap Leo “accidentally” was funny, though that’s kind of been all they’ve been doing this volume; taking little shots and jabs at each other.  The great rivalry of Leo and Cha Ocho just amounts to a bunch of juvenile teasing.

Mikey and the Regenta’s romance is blossoming and it’s a weird thing to read in a Mirage TMNT comic.  Romance has never been an element of their narrative outside of maybe Donatello swooning about Jhanna in TMNT (Vol. 1) #13.  Well, there was Mikey’s and Horridus’s whole thing in the Image series, but “that doesn’t count anymore” or whatever.

Point is, it’s just kind of strange to be reading a decompressed romance story starring one of the Turtles in a Mirage book.  It’s pretty saccharine stuff; not an epic romance for the ages by any measure… but it’s something else we’ve never gotten before in a Mirage TMNT comic, so it sort of feels fresh.  I actually like it, even if the dialogue is hammy and predictable.

And if you take the Image series into account (it’s up to the reader to decide whether it “counts” or not, I think), then it paints an even more interesting picture of Michelangelo.  He’s the Turtle who has had the most number of long, serious romantic relationships in this continuity (between Horridus and the Regenta) and he’s definitely the Turtle most interested in dating.  It’s certainly fitting, as part of Mike’s characterization that’s always been consistent has been his desire to be “normal” and live the way “normal people” do.  Which is also funny, considering he’s the dreamer that reads comics and keeps his head in the clouds all the time.

Once you peel back the catchphrases and comedy relief shtick, Mikey’s actually a pretty interesting character.

Anyway, onto Donatello.  His segment drags as it amounts to 12 (TWELVE!) pages of talking and walking.  Don and the explorers don’t actually exchange a lot of information, at least not enough to warrant 12 freakin’ pages (they’re in a glass prison, there are predators, and they may or may not be shrunken).  I mean, this is a pretty action-packed issue, all things considered, bookended by two fight sequences, so I’ve no problem with the middle segments (Mikey’s and Donnie’s) being dialogue-driven.  But man, these 12 pages last a freakin’ lifetime.

Finally, Gameraph has a disjointed dream with weird symbolism that may or may not actually mean anything.  It’s funny that Raph is the one dreaming about betraying and killing Splinter; he had the same nightmare back in TMNT (Vol. 2) #1.  Why he seems to be the one to consistently dream about betraying his sensei has never been expanded upon.  What exactly IS Raph’s complex?  Maybe because he never got control of his anger issues and thus feels he “failed” Master Splinter in some way?  Your guess is as good as mine.

The cliffhanger is one of Volume 4’s best, too.  I can’t tell you how psyched I was when I first saw it back in 2004.  Keep in mind that Tales of the TMNT Volume 2 was still in its infancy when this issue came out and we really hadn’t seen much of Leatherhead in a while.  So it felt like a big deal.  I’m actually looking forward to rereading the next issue for the first time since it came out and seeing if the fight scene lives up to my memories.

All in all, this was a pretty solid issue of Volume 4.  The Donnie segment drags due to excessive decompression, but for the most part it was paced decently; dialogue-heavy sequences sandwiched between action-heavy sequences.  It works.