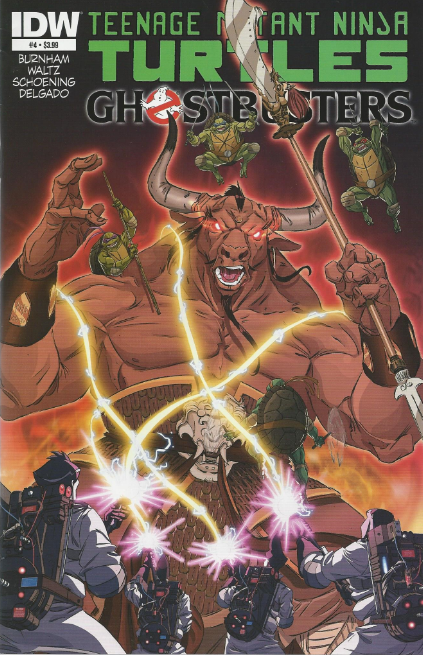 At the Firehouse, Ray, Kylie and Janine are busy working on the EMP device in Egon’s lab upstairs, while Egon and Donatello are busy putting together the transdimensional portal in the basement.  Suddenly, the proximity alarm goes off as Chi-You’s possessed thralls attack the Firehouse. 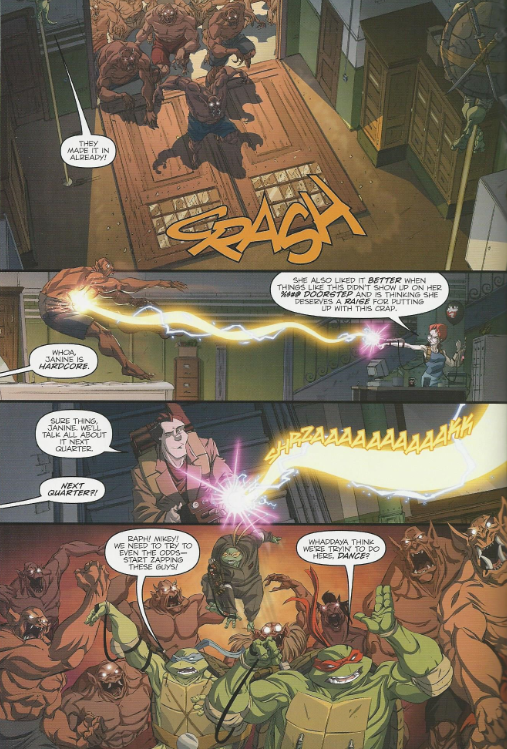 Peter and Winston head down to the first floor with their proton packs (where Janine is already fending the thralls off) while Leonardo, Michelangelo and Raphael strap on their proton tasers and follow.  Ray, Kylie and April put the finishing touches on the EMP, but before they can activate it they’re subdued by Chi-You.  The still recovering Casey hobbles out of bed and reaches the EMP device, activating it.  The electromagnetic pulse frees all the human thralls from Chi-You’s possession, but also blows the power grid on the containment unit (which is being used to power the teleporter).  Egon and Don scramble to fix it before everything blows up.

Peter and Winston respond to Egon’s lab and ensnare Chi-You (who is weakened without his thralls) in their proton streams.  Leo then throws a ghost trap, but rather than be caught, Chi-You decides to possess Winston.  He transforms him into a giant minotaur with a proton pack-powered axe and smashes his way through the Firehouse. 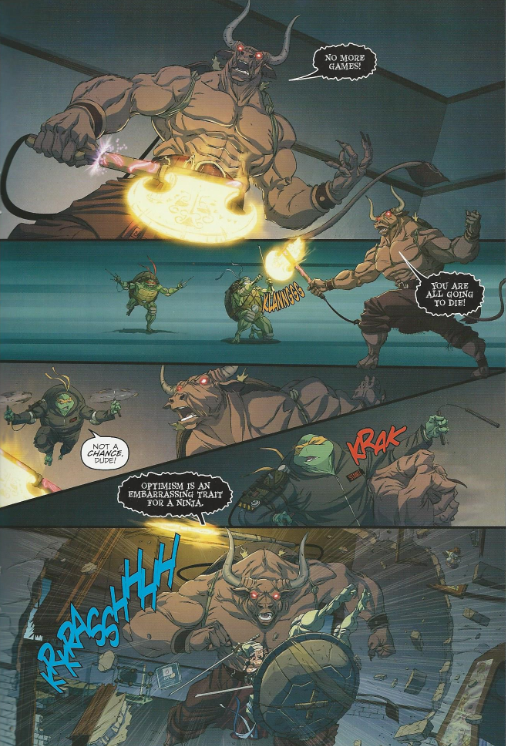 While Leo and Raph keep Chi-You distracted, Peter sends Mikey down to the Ecto-1 to get a slime blower out of the trunk.  Mikey returns and douses Chi-You with mood slime to counteract the possession.  Leo pulls Winston free and Peter deploys the ghost trap which successfully captures Chi-You.  Downstairs, Egon and Don have rerouted the power with only seconds to spare. 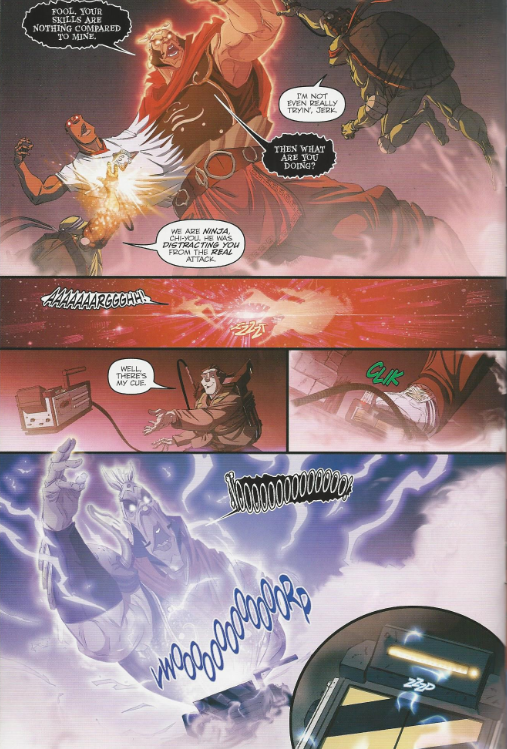 Later, the Ghostbusters and the Turtles gather in the basement to bid farewell.  Egon reminds them that if they linger any longer, they may begin to dimensionally dissolve and then there’s no telling where they’ll end up when they go through the portal.  Winston gives Leo his Marine officer's stripes as a token of thanks and after goodbyes are made, the Turtles, April and Casey go through the portal and arrive in the lair where Splinter awaits.

Back in the Firehouse, Winston decides that Chi-You is too dangerous to keep in the containment unit.  He has Egon punch up some distant coordinates on the teleporter and tosses the trap in.  Chi-You’s trap finds itself in Proxima Centauri, 4.2 light years from Earth, floating helplessly through space.  However, he can now sense the presence of his siblings and decides to just bide his time until he can free himself once more.

*This story is continued from TMNT/Ghostbusters #3.  For the Turtles, their story will continue in TMNT (IDW) #41.

*This issue was originally published with 4 variant covers: Regular Cover by Schoening and Delgado, Subscription Cover by Robert Atkins and Simon Gough, Hot Topic Exclusive by Adam Gorham, and Hastings Exclusive by Brent Peeples and Delgado.

The TMNT/Ghostbusters crossover miniseries wasn’t what I’d call especially imaginative, no.  It followed all the clichés and checkpoints of every crossover scenario.  But was it bad?  Not at all.  Yes, it is extremely familiar and anybody who has read enough crossovers will predict the story beats many pages in advance.  But it was fun and lively and very entertaining.

While the continuity is steeped in IDW’s TMNT comic, the Ghostbusters don’t play second fiddle to the Green Machine.  This was a very evenly distributed crossover where both sides got their fair opportunities to shine and contribute.  A LOT of characters were involved (a cast of 12 is pretty big when they only have 4 issues to spread out over) but no one was treated like dead weight.  Even Casey got his one little moment to do something besides be a punching bag in this issue.  While it’s kind of sad that “pushing a button” is the most badass thing IDW Casey has accomplished in the past two years, well… It’s something.

As hectic as this conclusion was, not one of the characters vanished from the pages for no reason and even Egon and Donnie, relegated to tech guys in the basement, got to enjoy their share of suspense.  When the group gets pulled in different directions, you know that those cast members are off DOING something.  They simply don’t disappear because the writer couldn’t think of anything for them to do at the moment (a serious problem with books that work with large ensemble casts).

While it did suffer all the tropes of a crossover story, I can forgive much of that because there are certain things readers WANT to see in a crossover story, even if they’re predictable.  We got all those great interactions and the story was never dull.  It often ping-ponged back and forth a bit too much with the characters running out, fighting Chi-You, going back to the Firehouse, running out, and so on.  THAT element of the structure did get on my nerves a little, yes.  But I loved seeing the Turtles and the Ghostbusters chat and fight alongside each other and compare the weirdness of their respective universes.  It was good fun.

And although it may seem like an “unnecessary” miniseries, if all you care about is what a story contributes to the larger tapestry of the narrative, it wasn’t without its contributions to the IDW TMNT mythology.  It got the teleporter working and that’s already coming in handy during the “Attack on Technodrome” arc (published concurrently with this miniseries).  More than that, it gave us Chi-You, extending the supernatural family beyond just Kitsune and the Rat King.  While he’s still incarcerated by the end of this miniseries, the fact that he can now sense his kin indicates he’s back in his own universe, albeit very far from Earth.  I’m sure he’ll show up again.

As for the Ghostbusters, they now have a working interdimensional teleporter.  I’m sure they can find something fun to do with that.  Of course, that all hinges on whether IDW ever gives us more Ghostbusters comics.  I haven’t heard if they have any immediate plans, but I hope they don’t wait too long.  If the license lapses and another publisher picks it up, Burnham’s continuity might be as good as dead. (UPDATE: They've got plans!)

On a small note, I loved how Schoening adapted the style of Cory Smith for those panels where the Turtles returned to their universe.  While it’s still distinctly Schoening’s work, you can tell he was going for the aesthetic cues laid down by Smith.  It was a neat little thing and also bookends the mini nicely on a visual level (since Smith actually drew the Turtles in their own universe at the start of this mini).

So yeah, while the TMNT/Ghostbusters crossover was predictable, it was a lot of fun and there isn’t really anything wrong with that.

Grade: B+ (as in, “By the way, which character is Melissa McCarthy going to play in the new all-female Ghostbusters movie?  Slimer or Stay-Puft?”)