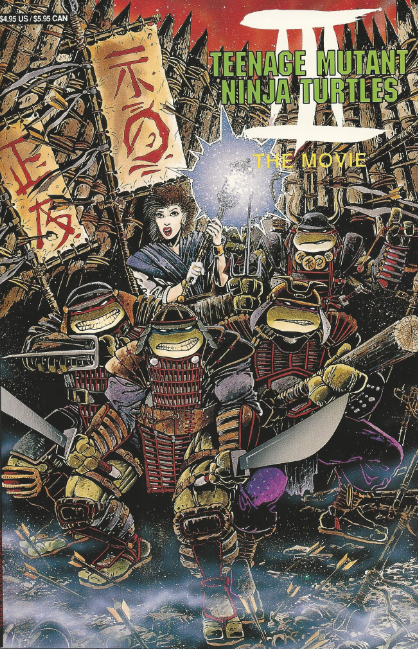 1593.  Japan.  Prince Kenshin attempts to escape from his evil father, the Daimyo Lord Norinaga, but is wrangled by the Honor Guard.  He is brought back to Kumano Castle where Norinaga admonishes him before postponing a weapons-for-gold deal with the English arms dealer named Walker.  Kenshin seeks solace in the castle’s temple and a divine wind unfurls a scroll detailing his wicked ancestor’s defeat at the hands of four Kappa.  Spooked, he places his hand on a nearby sceptre. 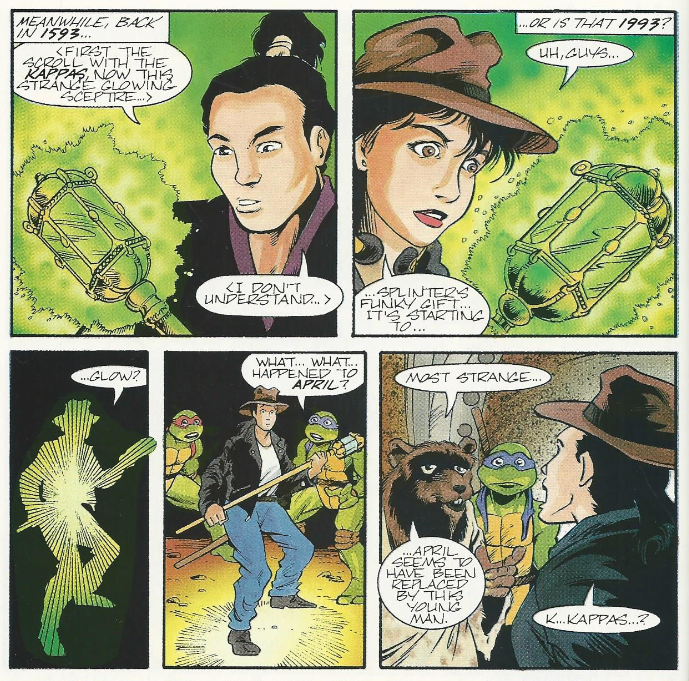 1993.  New York City.  April visits the Ninja Turtles in their subway lair with some gifts she bought at a flea market.  Among them is an old Japanese scepter.  It begins to glow in her hand and suddenly April trades place across time with Kenshin.  The Turtles and Splinter are, naturally, shocked and grill Kenshin for answers.

In Feudal Japan, April is immediately taken prisoner by the Honor Guard for being a witch and spiriting Kenshin away.  She is brought before Lord Norinaga and Walker insists that she is no witch, but merely a trickster.  Norinaga has her sent to the dungeon to be tortured until she reveals the whereabouts of his son. 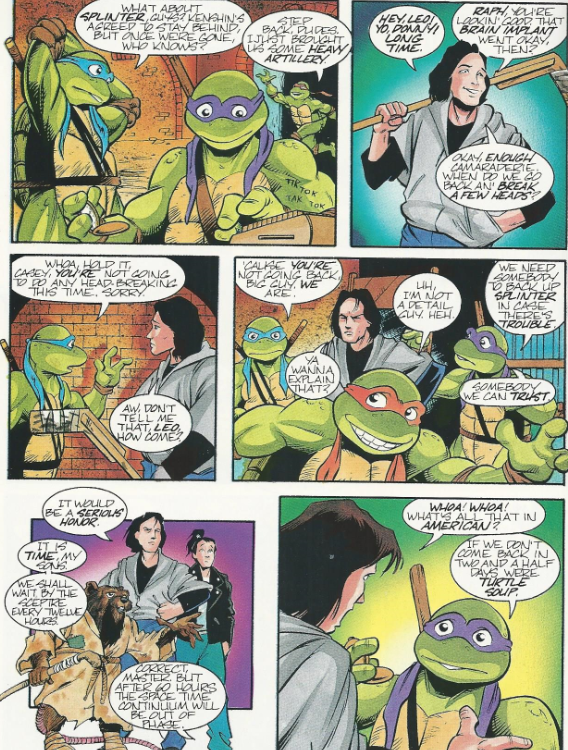 Back in the present, Donatello deduces that the sceptre is a mass-displacement device that can swap entities of identical weight across time and space, but only for 60 hours.  The Turtles decide to go back in time and save April.  Leonardo fetches Casey Jones to help Splinter keep an eye on Kenshin and whoever swaps places with them.  The Turtles activate the sceptre and trade places with Norinaga’s Honor Guard, who brought the sceptre into battle against some villagers as a good luck charm.

The Turtles immediately fall off their horses and lose the sceptre in the madness.  Michelangelo is carried off by his horse and is knocked out by the leader of the villagers, a woman named Mitsu.  She mistakes Mikey for a Kappa and tells the other villagers to take him back to their village, as he might be able to help them.  Meanwhile, an unseen figure recovers the sceptre.

At the castle, the other three Turtles, still disguised in the Honor Guard’s armor, decide to infiltrate the place.  They sneak into the dungeon, beat up Walker’s guards and save April.  They also rescue a man named Whit (who looks just like Casey), who was imprisoned for inciting mutiny on Walker’s ship.  They escape through a sewage drain before reinforcements can arrive. 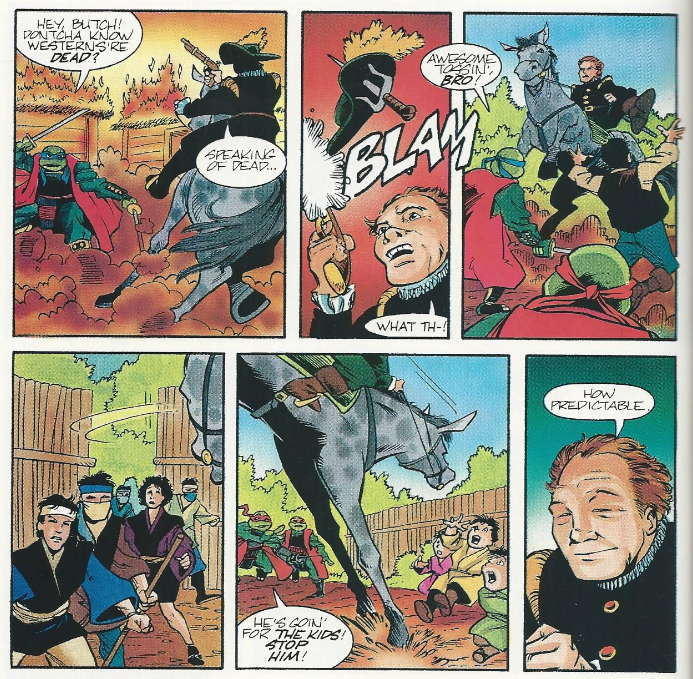 The next morning, while freshening up by a stream, they’re attacked by Mitsu and the villagers.  Mitsu recognizes the “Kappa” as being similar to the one she helped the previous day and invites them back to the village.  They arrive just as Walker and his men begin ransacking the place.  Mikey reunites with his brothers and together they scare the men off, pretending to be demons.  They also save a young boy named Yoshi from a burning house.  In doing so, they’re accepted as friends by the villagers.  Mikey immediately becomes smitten with Mitsu.

Back in the present, Casey and Splinter are having trouble sedating the restless Kenshin and the Honor Guard.  Luckily, they manage to keep them occupied with a little television.

Back in Feudal Japan, Walker meets with Norinaga.  Norinaga tells him of the ancient scroll and how his ancestor was killed by Kappa.  Fearing the Kappa have returned for him, he agrees to buy Walker’s weapons.

At the village, Don has had no luck finding the sceptre.  Leo has taken to horse-riding with the village soldiers while Raph has formed a friendship with Yoshi (whom he sees much of himself in).  Mikey, meanwhile, tries to spend time with Mitsu, but she cannot relax due to her concern for Kenshin (her beloved) and for the people of her village.

The Turtles hire the village blacksmith to build a new sceptre.  He does so and Michelangelo immediately breaks it with his butterfingers.  All hope for going home seems lost until Yoshi reveals that his sister, Mitsu, has been hiding the real sceptre in their house.  The Turtles are pissed at her, but Mitsu’s grandfather reveals that she knew nothing of it.  HE hid the sceptre, hoping to keep the “Kappa” around so they would fight.  The Turtles decide that even though they could go home immediately, they’ll stay and fight with the villagers against Norinaga and Walker.  Suddenly, Whit shows his true colors and steals the sceptre, taking Mitsu hostage in the process.

Whit takes Mitsu back to Walker to make good with his old boss.  Mitsu is taken prisoner by Norinaga while Walker takes the sceptre as a bargaining chip. 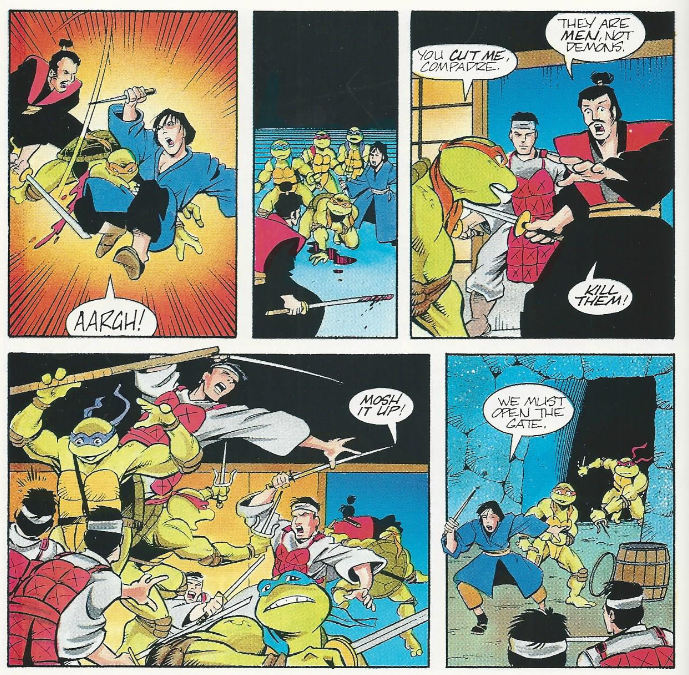 That night, April surrenders herself to Norinaga’s men and the distraction allows the Turtles to break into the dungeon and save Mitsu.  They infiltrate the castle and confront Norinaga.  Norinaga attempts to kill Mitsu, but Mikey intervenes, getting badly slashed in the process.  Leo then traps Norinaga in a huge bell and the battle seems over.

However, Walker appears, holding April hostage.  His men then surround the Turtles and take aim with their guns.  Whit tells Walker that the deal was he’d just take the gold and leave without hurting anybody.  Walker throws Whit and April into the circle to die with the Turtles.  Leo tells the superstitious men that he and his brothers are demons and if they shoot them, the bullets will magically bounce back and kill them.  The men become too frightened to shoot, so Walker lights a cannon.  The Turtles duck their heads into their shells and the cannonball misses. 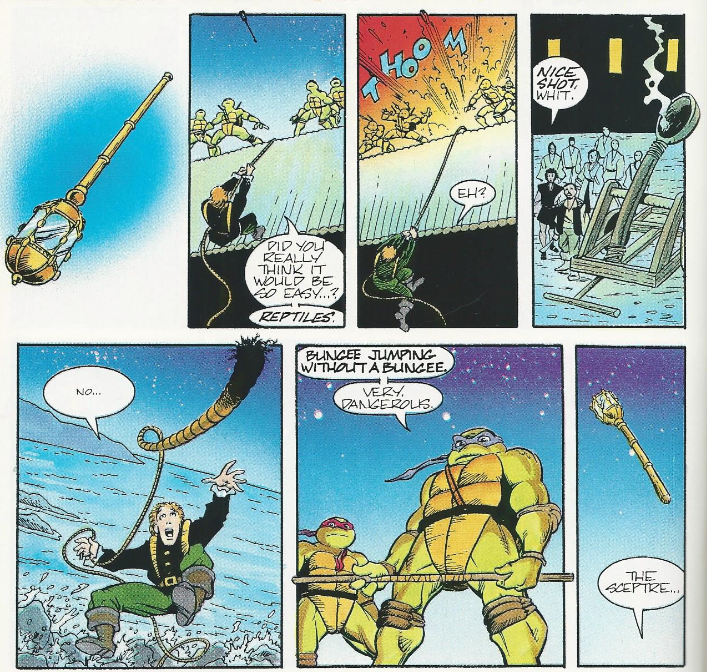 Walker flees to the roof of the castle with the sceptre as the Turtles give chase.  He holds it over the ledge overhanging a precarious drop into the rocky sea, stalling the Turtles.  He then lets down a rope to climb to freedom, but just as he begins his descent, Whit launches an explosive from a catapult that severs Walker’s line and sends him plummeting to his death.  The Turtles form a human chain and catch the sceptre.

Back in the present, Casey takes the Honor Guard to a bar for one last glimpse at the future.  They get into a fight with some drunks and have a great time before heading home.

Back in Feudal Japan, the Turtles and April prepare to return home, however, Leo, Raph and Mikey want to stay.  They prefer life in Feudal Japan, where they can live openly among humanity.  However, April and Don insist that if they stayed behind, they’d be stranding Kenshin and the Honor Guard in the future.  Mikey says his goodbyes to Mitsu and they all grab the sceptre which begins to glow. 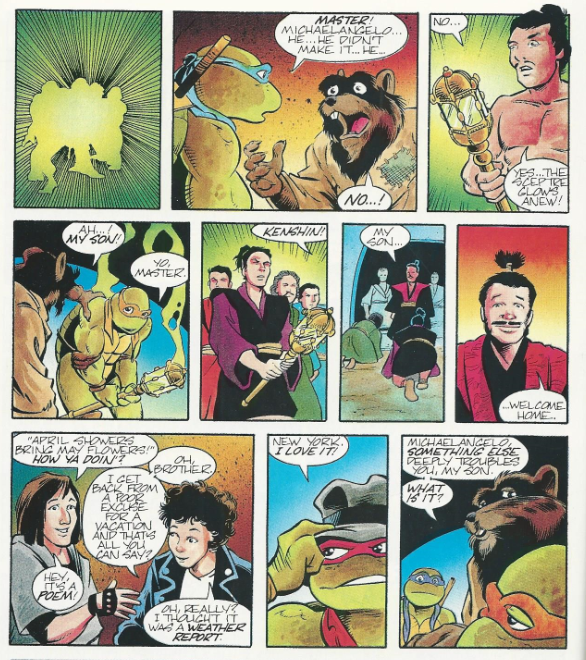 The Turtles and April return to the present (Mikey a little later than the others).  April and Casey flirt and everything seems like a happy ending, although Mikey is bummed that he lost Mitsu to Kenshin.  That is, until he remembers that the 20th Century has something Feudal Japan doesn’t: Pizza!

*This story is continued from TMNT Movie II: The Secret of the Ooze.  If you consider the 2007 “TMNT” film by Imagi to be a sequel, then the story continues in TMNT Movie Prequel #1 - Raphael.

*If you don’t, then the story continues in the Ninja Turtles: The Next Mutation television series.  Godspeed.

*Obviously, this comic is an adaptation of the 1993 film “TMNT III” from Golden Harvest.

*Yes, that is correct.  The newsstand edition has the bonus pages and the prestige edition doesn’t.  Weird.

*This isn’t the only comic adaptation of “TMNT III”.  It was adapted twice for the Japanese market: A version serialized in six chapters in Comic Bom Bom (by Haato Mikaeru), and a version released as a graphic novel from Dengeki (by Yasuhichi Konoha).

Note: The only version I own is the Archie Prestige Edition, so that is the version I will be reviewing.

As always, I don’t want to review the story too thoroughly, since I’d rather save those thoughts for an inevitable review of the actual “TMNT III” film.  I will say, however, that the plot is much, MUCH more endurable in comic book format.  The awful costumes, special effects and acting are really the hardest part of “TMNT III” to suffer, and when all THAT is taken away… It’s much easier on the intellect.

Of course, there are still all the plot holes to reckon with; those don’t go anywhere.  You know, pointless bullshit like the blacksmith making a duplicate magic sceptre (because blacksmiths can do that?) and Mikey stupidly breaking it seconds later.  There was absolutely no need for that entire subplot other than to kill time.  Just… why was it even in there?  But I’m criticizing something present in the original film, so I’ll stop myself for the time being.

Steve Murphy does a much better job adapting this film than “Secret of the Ooze” and eliminates dialogue and gags that interfere with the flow of the story.  Not ALL the meandering bullshit, no (the aforementioned replacement sceptre bit remains intact), but it’s a pretty tidy rendering of the film.  He rewrites dialogue to a greater degree than with “Secret of the Ooze” and overall it reads much better.  As a matter of fact, thanks to the episodic nature of the film-itself, this could have almost been serialized as issues of TMNT Adventures without much disconnect (save for the presence of Casey Jones).

The art is provided by Chris Allan, which should immediately make the adaptation more interesting to collectors.  What’s strange is that he adapts the look of the characters as they appeared in the film rather than use his typical Archie style.  It’s a little weird, but I wouldn’t say that it’s ugly, either.  He actually makes those awful Turtle costumes and that pathetic Splinter puppet much more palatable.  Casey looks like he’s about 50 years old, though.

I think what really hurts this adaptation is that it lacks action.  With the whole film condensed down to 48 pages, the moments that further the plot take priority over the fighting.  As a result, the Turtles hardly get a chance to do anything “cool” and it’s mostly just bland rescue missions.  The comic adaptation of “TMNT: The Movie” also suffered from a decrease in the action to make room for the story.  Looking over these movie comics, I think “Secret of the Ooze” is the only one of them to effectively balance the action with the story (although it was oddly the worst of the three adaptations).

The comic version of “TMNT III” is probably the best way to enjoy that story.  It isn’t that good, mainly because it’s sort of just polishing a turd, but I appreciate that it made the effort.  There’s some very unique Chris Allan art to enjoy in here and the coloring in the Prestige Edition is really nice (save for a few moments of bandana fuck-upery, but that should almost go without saying by this point).

Grade: C (as in, “Come on, they actually thought they could follow Super Shredder, Tokka and Rahzar up with a prissy British guy as the lead villain?  It’s like they weren’t even trying”.)