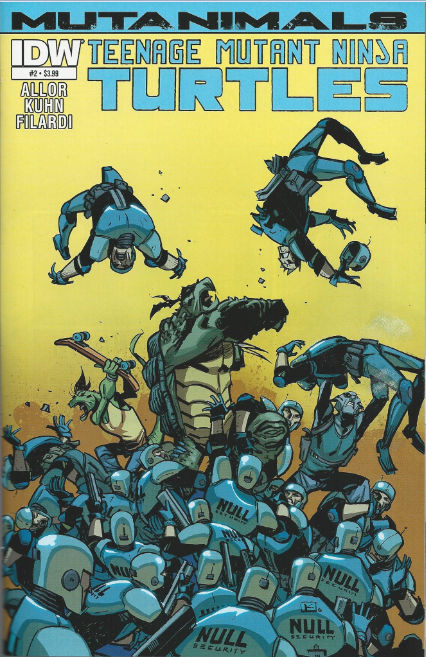 At Mutanimals HQ, Herman the Hermit Crab and Mondo Gecko talk about their polarizing dispositions (Herman’s a career soldier, Mondo’s a slacker) and also Mutagen Man.  Mondo doesn’t like him, but Herman thinks he’s just a former POW that needs to acclimate to society. 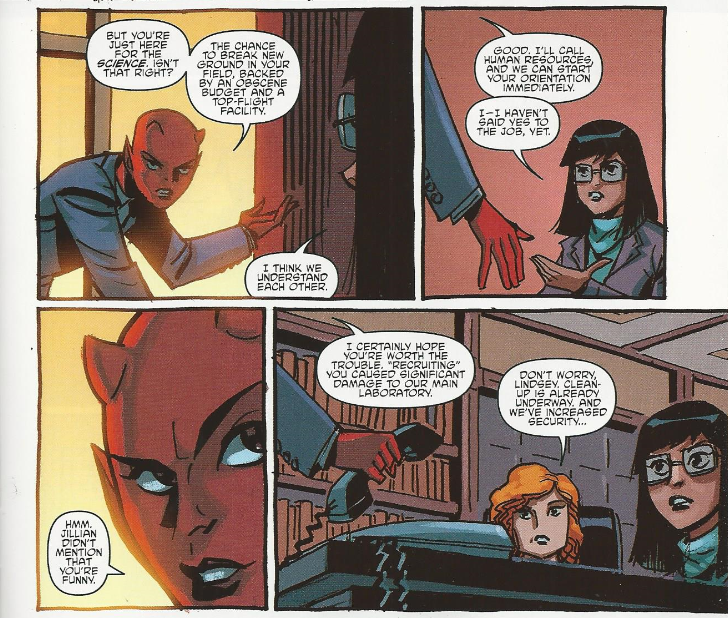 At Null Group HQ, the devilish-looking CEO of the company, Madame Null, interviews Lindsey for a scientific position in her company.  With Jillian’s reference, Null agrees to hire her and puts her on the mutant project.

Outside the Null Group lab, Old Hob and Slash are dismayed to find that they’ve beefed up security, making it impossible for them to rescue the other mutants trapped inside.  Hob decides that they need to kidnap a scientist and interrogate them.  Luckily, one just so happens to be leaving…

Back at Mutanimals HQ, Mondo decides to give Mutagen Man a chance and they play video games together.  Mondo says that Mutagen Man deserves a better name than the one Null gave him and starts calling him “Seymour Guts”.  Mutagen Man laughs at the pun and it’s the first time he’s ever laughed in his life.

In their interrogation room, Hob and Slash have the scientist tied up and they’re grilling him for info.  The scientist explains that Madame Null wants to create an army of mutant hybrids, each genetically tailored to any conceivable occupation (combining the traits of different animals to be the most effective).  Madame Null has designs on conquering the world’s economy with her mutant workforce.  Hob asks where the other mutant experiments are and the scientist says that all were executed except Mutagen Man and two others.  The other two are about to be shipped off at the train yard.  Hob pulls out a gun to kill the scientist, but Slash stops him, insisting that they’d be just as bad as Null’s scientist if they did so. 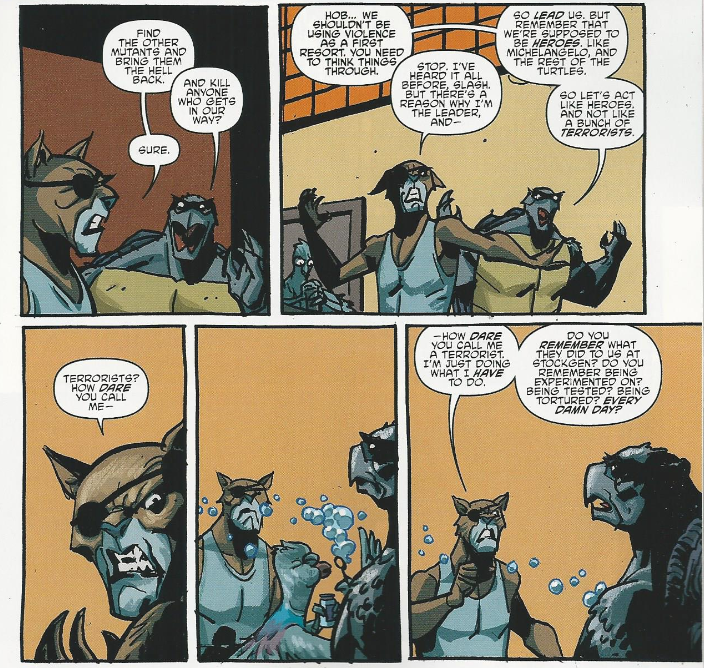 Hob rallies the Mutanimals for an immediate attack on the train yard, but Slash once again undermines his authority and questions the plan, thinking they shouldn’t charge right into danger.  Hob insists that the mutants about to be shipped off don’t have the luxury of waiting and orders the Mutanimals into the van.  Mutagen Man hesitantly joins them, wanting to save the other experiments like himself.

They charge into the train yard in their van, but are immediately surrounded by Null soldiers.  Madame Null greets them, saying that the scientist they captured freed himself and gave them warning of the attack.  Hob shoots her, but the bullets do no damage.  The soldiers descend upon the Mutanimals and begin taking them captive.  Hob orders Slash and Mondo to retreat and they slip away in the chaos.  The Mutanimals are then loaded onto the train where the two other mutant prisoners, a cat-woman named Sally and a man-ray named Ray, are already imprisoned. 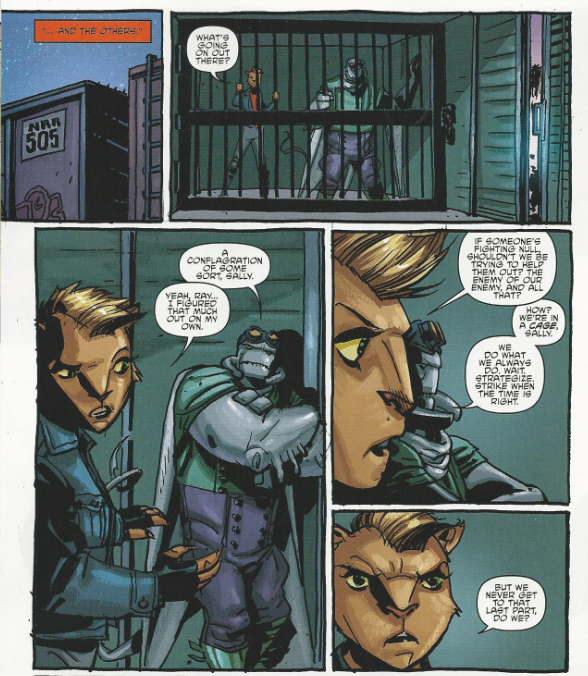 Elsewhere, Slash and Mondo reconvene.  Mondo doesn’t know what to do, but Slash tells him that they’re going to do what they must because they’re… The Mighty Mutanimals!

Man, we’re in the midst of the most unexpected revival I could have ever hoped for (besides Pizzaface, I mean).  The Mutanimals have been slowly building in the pages of the IDW comic for a while, but now they’ve broken into the Nickelodeon cartoon, too!  Everywhere I look, it’s the Mutanimals!  And I love it.

I bring up their recent debut in the Nick TMNT cartoon because there seems to be some (possibly coincidental) synergy between IDW and Nick.  The Nick Mutanimals are led by Slash and now, with Hob in the lock-up, so are the IDW Mutanimals.  I dunno if that was arranged beforehand or just a happy accident, but it’s neat to see the two incarnations aligning like this all of a sudden.

It also makes it easier to read IDW Slash’s dialogue with Corey Feldman’s voice in my head.

Anyhow, to speak to the specifics of this issue, Allor does a fine job of balancing the grimness with the humor.  The comic isn’t bipolar; like the first 11 page are dark and brooding while the last 11 pages are fun and goofy.  The lighthearted antics are woven in and around the darker narrative and there’s no tonal whiplash to speak of.  At times, Allor even seems to be reminding the characters to lighten up when things get too intense (Pete interrupting Hob’s and Slash’s Serious Business with a parade of bubbles).  I mean, this book is called “Mutanimals”, how serious can you honestly make it?

While Hob and Slash do take center stage, arguing over the finer points of leadership, we do get time to learn about the other members of the team.  Herman’s still a little thin on characterization, but I enjoyed seeing him show the most concern for Mutagen Man right at the getgo.  Mondo being portrayed as a slacker was a good lead-in to his predicament at the end of the issue, having to accept the responsibility of rescuing his comrades.  Pete remains Pete and god bless him for that.

As for Mutagen Man, he’s rather sad and pathetic so far, but I have a feeling he’s going to show some dangerous potential before the mini’s over.  I wonder exactly how they’re going to render his powers or just WHAT powers they’re going to give him.  His original Playmates action figure never described any specific ability, but gave him a machine gun.  The old Fred Wolf cartoon interpreted his bio’s description of “ever changing” to mean that he could duplicate the appearance of anyone he laid eyes on.  The Nickelodeon cartoon just gave him extending liquid arms.

So who knows what he’ll be able to do in this incarnation.

As for Madame Null, that was an interesting change.  I don’t think it really has an impact on Null’s character, whatever sex he/she is.  Admittedly, one of Null’s recurring shticks in the Archie comic was that he liked to hit and demean women (because he was the devil), so seeing him turned into a woman has a lick of irony to it.  So far, Madame Null is a rather typical villain, but let’s be honest; so was the original Null.

And hey, two new faces.  Ray is obviously Man-Ray/Ray Fillet, but Sally looks to be an original character.  Unless she has spots under that coat and turns out to be Jagwar.  Anything’s possible, I suppose.

Grade: B+ (as in, “But Allor missed a golden opportunity to use that bow-tied scientist to introduce Professor Jordan Perry into the IDW series!  Bah”.)