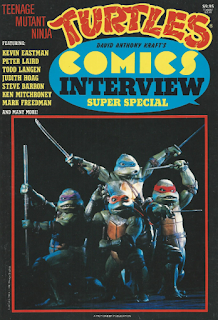 *As a result of these interviews being reprints, some of the topics covered are rather out-of-date by the time of this publication, particularly the Eastman and Laird interviews from Comics Interview Special #27.

Look what I found at the bottom of my foot locker!

I was digging through there for not-porn and I rediscovered this old thing beneath piles of Heavy Metal magazines and those TMNT & Other Strangeness manuals that haven’t seen daylight since I wrote that old article about them.  Also binders of old Marvel Comics trading cards.  Worthless, worthless trading cards.

The interviews collected in this special are quaint and of their time, but holy shit there are a LOT of them.  And they’re damn thorough, covering just about every angle of Turtlemania, from the comics to the movies to the super boring behind-the-scenes business stuff.  Just about the only end of the spectrum not to get any coverage were the cartoons and toyline, at least not directly (guys like Brown and Freedman talk about them, but we get no words from folks strictly involved in those mediums). 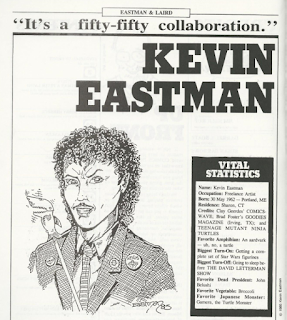 Obviously, not all these interviews are going to be insightful.  I found the plethora of conversations with the folks involved with TMNT: The Movie to get pretty tiresome.  They all tell variations of the same stories (“I thought the name sounded really crazy when my agent told me about it!” “The animatronic suits were always breaking!”) and after two or three of these things you get the feeling the interviewees were all paraphrasing a single script of approved responses from a publicist.

One of the most common themes of the movie interviews is how everyone involved wants to make DAMN SURE readers know that they’re staying true to the Mirage comics.  Steve Barron and Eastman and Laird and the screenwriters and everyone else reiterates, under no uncertain terms, that despite the colorful bandanas and the presence of pizza, that the TMNT movie would be a Mirage comics adaptation, not a Fred Wolf cartoon adaptation.  I guess they knew their audience with these interviews (the magazine was called “Comics Interview” after all) and wanted to make sure they wouldn’t dismiss the film out of hand. 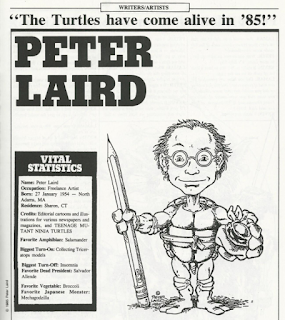 I guess my favorite story in the movie portion of the special, and one Laird has told many times over the decades, was the initial pitch he received for the film.  Apparently, the film was going to be a low budget spoof flick starring popular comedians like Gallagher, Billy Crystal and Howie Mandell in green face-paint.  Eastman, Laird and even Mark Freedman (the licensor) vetoed that idea in an instant.

The more interesting interviews were with the comics staff.  Or they were more interesting to me, anyway.  Steve Murphy (under his pseudonym, Dean Clarrain) gets two separate interviews; one about TMNT Adventures and another about the TMNT newspaper strip and other assorted odds and ends.  He goes off on tangents about the environment FREQUENTLY, not that I was surprised, and he’s constantly giving himself a round of applause about the political and environmental themes he’d be including in TMNT Adventures.  It’s a bit masturbatory, but it’s typical Steve Murphy.

What I found hilarious was that he makes the claim: “I don’t want to get too preachy in the book.  I would like to somehow hit this middle ground where environmental themes can be, say, the crux of a problem, or a part of an adventure.”  Shit, man, you wrote a half-yearlong storyline where the Turtles try to save the rain forest, only deviating momentarily to try and save the whales.  If that’s your idea of not being “too preachy” then dear god, I don’t want to see you on a soap box. 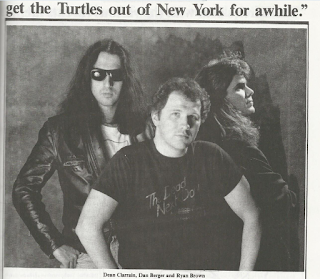 The best bit comes when he starts calling out Captain Planet and the Planeteers: “And Ted Turner’s got a show he’s working on with DIC Enterprises for Autumn release, an animated series called Captain Planet.  From what I’ve seen, they’re humans with one character who is super-powered… I’ve heard that it’s very preachy… They seem to just be fighting the evil oil spill captain; very blatant type of stories.”  Real pot-kettle-black stuff, right there.  I mean, sheesh, Murphy wrote a story where a heavy metal singer screams songs about the evils of Big Oil and wrote god knows how many comics about the evils of pollution.

If anything interesting came from Murphy’s interviews, it was the reveal that Man Ray/Ray Fillet was based on the flying manta rays from his own comic, Puma Blues.  I hadn’t thought about that before, but it seems obvious in retrospect.

Ken Mitchroney’s interview is fascinating, though the Turtles are only a small part of it.  At the time, Mitchroney was working in Hollywood on shows like Tiny Toon Adventures and actually drew TMNT Adventures on the weekends!  I find that amazing, especially considering how few fill-ins he required during his run and how great the pencils looked. 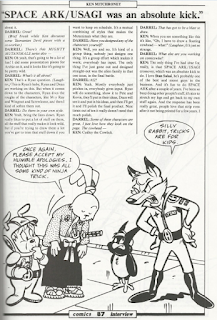 Mitchroney talks mostly about the landscape of the animation industry circa ‘89-90, and if you’re at all interested in American animation history then you’ll recognize most of the names he drops.  Apparently, every person in Hollywood who worked on cartoons knew each other back then.  What’s even more fascinating is just WHO he talks about with reverence.  He mentions what an honor it was to work with John Kricfalusi on Beanie & Cecil before spiraling into anecdotes about Tiny Toons.  If you have ever, EVER read an interview with John K., then you know how much contempt he has for Tiny Toon Adventures (and nearly every cartoon made after 1955).  I guess the respect wasn’t a mutual one.

Most of the other interviews center around promoting stuff that’s been out for over two decades now, so it can get a little dull on that end.  I mean, it’s fun to read the excitement from the creators about their new comics and projects, and you can feel a little smug knowing how those things turned out because we’re 25 years in the future, but the exercise gets old after a while.  This special is 121 pages long!

The whole book is punctuated with promotional images.  A lot of it is “the usual”; the same old Eastman/Laird stock TMNT artwork you see in every retrospective book or magazine.  There were a couple pieces in here that I wasn’t familiar with, like a neat one with 6 (!?) Turtles cosplaying as various Marvel Comics characters.  I think the only other piece I’d never seen before was a cropped image of the Mirage Turtles sneering with contempt at a billboard promoting the cartoon Turtles.  Anyone have an uncropped version of this?  It’d make a good Awesome Turtles Picture update. 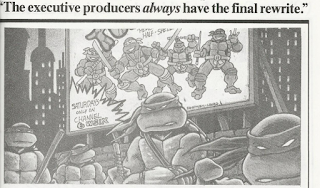 So I guess the question now is whether or not the special is worth tracking down on the aftermarket.  Well, it’s a mixed bag of content, but considering the sheer size of the thing, that was bound to happen.  While some of the interviewees are insufferable and a few seem interested in talking about anything BUT the Ninja Turtles, several of the tidbits they drop are rare and fascinating.  The editors get pretty obscure with who they contact; I mean, the stunt double and the 1st draft writer?  So you get to hear insights from people at every leg of production, big and small.

Many of the stories are repeated between interviewees and there are times when the interviewer talks more than the guest, but it’s a good firsthand source for quotes and facts.  And I’ve always loved this promotional photo of Michelangelo outside the Metropolitan Museum of Art: 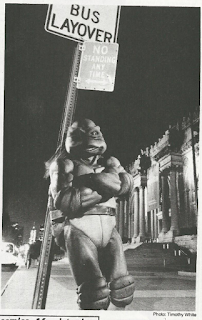