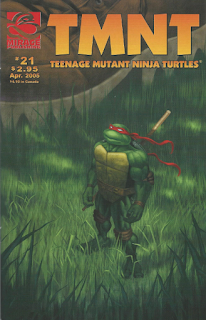 Mikey awakens in a dungeon populated with aliens and finds himself chained to a wall by an unbreakable molecular cable.  A Styraccodon tells him he’s in Royal Detention Center 17, a “black hole” prison where the Styraccodon’s send those they don’t want anyone to ever see or hear from again.  Mike insists that it’s all a misunderstanding, that the Regenta will set things right, but an elderly, blind Triceraton named Azokk warns him not to get his hopes up. 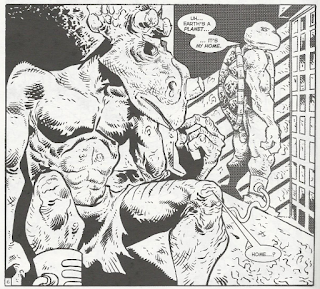 On the tepui, Glyminal tells Don that the Reptilians must be exterminated if they’re to have any chance of escaping.  Don suggests that instead of wiping out a sentient species, they instead use the shrinking ray on them so they can live out their live harmlessly in the habitrail.  Glyminal likes the idea and he and Don return to the habitrail to inform the explorers. 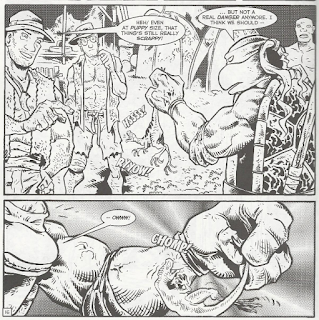 The humans are currently in a battle with the Reptilian that was brought into the habitrail unconscious with Donatello.  Glyminal uses the shrink ray on it and it falls into a river and begins happily hunting fish instead of people.

Down in the lair, Leo fits the mutated Raph with a new belt, though the bandana looks too silly on him to wear.  Leo checks out some fresh katana from the armory to replace the ones Three Moon Janguar broke, though Raph laments that he’s now too big to use his sai.  As they walk and talk, they mention that Mikey hasn’t returned to the Moon Island for his next tour guide assignment and risks getting fired.  Leo suggests Mikey just took Casey’s bike for a spin and lost track of time. 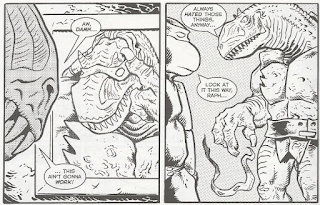 They meet up with the Fugitoid, who is using Don’s portable gene analyzer to check on Raph’s condition.  He informs Raph that he will no longer continue to mutate, but because his system has stabilized, he won’t be returning to normal, either.  Raph wants to get revenge on the “vampires” who did this to him and the Fugitoid informs him that the Kurtzburg Memorial officials have been on the case, but with no luck.

Back at the tepui, Glyminal returns all the humans and Utroms to their natural heights so they can go home.  However, when he tries the ray on Don, it doesn’t work.  He figures that Don’s unique mutant genetics are causing the problem, while Don isn’t too happy about being stuck in his shrunken state. 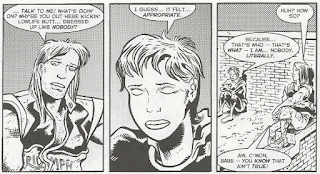 On a rooftop in Springfield, Casey asks April why she’s suddenly taken on the identity of Nobody. April says that after seeing what Renet showed her about her origins, she felt like “nobody” was the only identity she deserved.  Casey begs her to be honest with him and tell him what happened.  Realizing he deserves the truth, April starts to tell him a story…

The story arcs are all sort of shifting gears right now; the ones that were more exciting are slowing down while the ones that were tedious are ratcheting up.  It’s perfectly fine, as they can’t ALL be in action-mode all the time, and having them switch speeds at different intervals means we aren’t stuck with an “all-dialogue” or “all-action” issue.

Well, except for Don’s arc.  That shit has been nothing BUT tedious and it’s never gonna get any better.  But I’ll do these in order.

Mikey’s stuck in space-jail, doing space-time for his space-crimes and it doesn’t look like he’ll be getting space-parole anytime soon.  I love Mikey’s arc in Volume 4, and while I was cool with the rather long stretch of romance between him and Seri (the Regenta), I’m glad that it’s getting to the exciting part.  He’s going to be stuck in that hole for a while, but the tension builds steadily and some of the other alien prisoners will turn out to be interesting short-lived cast members.  Azokk has a wonderfully creepy design by Lawson and he’s one of my favorites of the named Triceratons in the series (up there with Zule and Zog).

And NOW we get to Don’s bit.  The fight with the Reptilian on the log spanning the moat should have been exciting, but the tiresome explanatory dialogue and the Reptillian’s stupid Gollum-speak effectively suck all the energy out of it.  Prior to that, four pages are spent with Donatello explaining to Glyminal that they should just shrink the Reptilians and, again, it takes the LONGEST route to describe the simplest concept.  Also, really?  The Venezuelan Utroms couldn’t come up with that complex strategy on their own?  “Shrink the Reptilians”?  Jeez, this doesn’t make Donatello look smart so much as it makes the Utroms look like simpletons.

Oh yeah, and Don’s stuck at 6-inches or thereabouts.  It’s been 10 years and he’s still that size.  Don’t expect any closure on that rather random dilemma anytime soon.

Although it IS interesting.  In this issue, Laird writes an extremely lengthy rebuttal in the letters column to a fan asking him why he couldn’t find some way to reincorporate the events of the Image TMNT Volume 3 series into Mirage continuity.  Laird, both delicately and not-so-much, explains that the Image series didn’t “feel right” and having it in continuity would distract and bother him, even if he never called back to it.  He didn’t care for where Carlson took the characters and didn’t want to try and fix the various mutilations the Turtles underwent, so he felt it was best to just forget the whole thing ever happened.

Yeah, he didn’t care for one-eyed Raph, one-handed Leo or cyborg Donatello.  But mutated Gameraph and shrunken (soon to be piloting a robot body) Donatello?  Aces.

The Leo arc, which had been the most fascinating of the storylines next to Mike’s, hits slow-motion for now.  Leo spends a really long time talking about their armory and why they have back-up weapons at the ready, as if we couldn’t figure that out on our own.  I did like how he and Raph took time to talk about Mikey’s whereabouts, at least intimating that they’re curious about where their bro is (rather than just plain forgetting about him).  The Leo arc is going to pick back up again, but I don’t think that’ll happen for a while.

Raph’s arc is pretty much over and done with save for the formality of returning him to normal, so I won’t have much to say about him for the rest of these reviews.

And lastly, we have April and Casey.  April’s decision to become Nobody will amount to nothing; her melodramatic but cryptic explanation as to why she took the name is all we’ll get.  It was dumb.  But rather than talk about April and dumb storylines, I’ll save that for the next review.  It’ll be a doozy.