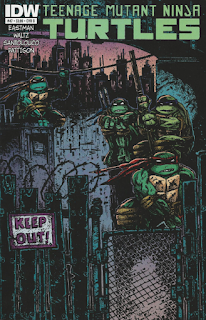 Outside the Second Time Around shop, Hun and the Purple Dragons goad Casey, Nobody and Alopex into a confrontation.  Casey gives Hun a speech about how family is more than just blood and how he’s found his REAL family, etc.  Hun can sympathize, as he considers the Dragons to be a more respectable family than Casey ever was.  A huge brawl breaks out, but the three heroes are vastly outnumbered. 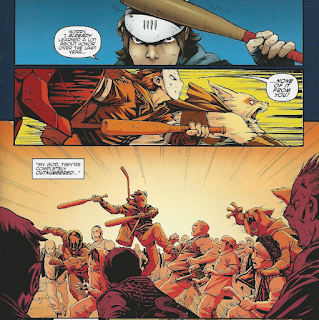 Seeing the violence, Mrs. O'Neil calls the cops while Mr. O’Neil rushes outside to help.  Arune’ also decides to come help and soon neighbors from all over are taking on the Dragons.  The Dragons are eventually driven off and Casey mocks the flightiness of Hun’s new “family”.  Hun only laughs and tells Casey that they’re more alike than they think, as he plans to rebuild the Dragons as many times as it takes.  Part of being a Jones is having an inner strength; being a constant fighter and never giving up.  And like it or not, Casey inherited that from his father.

The police finally arrive and Detective Kara Lewis arrests Hun.  He doesn’t put up a fight and goes quietly.  Casey goes home with the O’Neils as Nobody and Alopex vanish.

In the lair, Splinter looks over the scroll Dr. Miller stole from the Foot and gave to April.  He thinks it merits further investigation (while Leo is provoked by the drawing of the rat-man on it).  April says that she and Casey had been planning a trip for a long time and that investigating the scroll out west would be a perfect excuse to take it.  She then leaves to pick up Casey at her place. 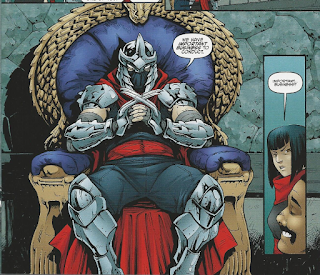 At Foot HQ, Koya and Bludgeon deliver the bad news that thanks to the Turtles and their robot “secret weapon”, Hun was able to escape.  Karai is about to admonish them when suddenly the Shredder returns with Baxter Stockman in tow.  He reasserts himself as leader of the Foot Clan and dismisses all but himself, Stockman and Karai.  Karai tries to tell him her plan to expunge all outsiders from the Clan, but Shredder explains that outsiders aren’t the problem; it’s the traitors within the Clan, such as Hamato Yoshi.  He tells Stockman to begin their plan, though Karai thinks their methods lack honor. 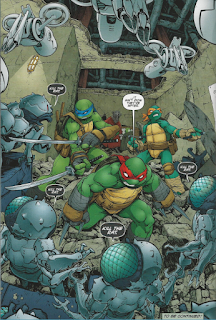 Using a mind-link helmet, Stockman unleashes his hordes of Flyborgs and flying Mousers from the TCRI Building.  At Harold’s lab, Metalhead-Donatello picks up a signal from the lair’s security systems.  The swarm is heading straight for the lair!  The robots smash through the church and down to where the Turtles and Splinter are, announcing their prime directive: “Kill the rat”.

*April and Casey’s search will continue into TMNT: Casey & April #1.

*This issue was originally published with 3 variant covers: Cover A by Santolouco, Cover B by Eastman and Pattison, and Cover RI by Valerio Schiti and Claudia SG Ianniciello.

The Hun/Casey thing finally sees some sort of closure in the most reasonable way possible without one of them dying.  I think it was way too late for them to ever come to terms with each other and restore any sort of familial bond; that ship sailed somewhere around the thirtieth beating.  But they do sort of see eye to eye for a moment and Casey, much to his chagrin, can see a bit of himself in his father.

I was rather glad Hun got arrested rather than killed.  I mentioned before that I hate it when characters are killed off since it eliminates any potential they might have had.  So much like Krang, Hun’s been taken off the playing field for now, but he may or may not come back in the future.

More importantly, Casey got to kick some ass in this issue without his ass being kicked, and that was a long time coming.  And with Hun in the slammer, maybe Casey’s arc can finally move away from his dad and back into whatever the Turtles are working on.  He’s been sort of a satellite character for a long time now, and April for even longer, so I hope to see them restored as ensemble cast members.  (Granted, that will have to wait until they get back from their road trip in the miniseries, but you know what I mean.)

Then you have Karai, who is slowly starting to come into her own after all this time.  Her brief musing about “honor” finally gives us a glimpse of the Karai we’ve known from other incarnations; a ruthless assassin, but a pragmatic and generally respectable one (so far as that occupation goes).

The big difference between the Shredder and Karai in the Mirage comics was that Shredder had no problem throwing money, lives and resources at petty grudges while Karai was more cunning and willing to make compromises if it was in the interest of the Clan.  We’re beginning to see that angle surface now, as Karai questions Shredder’s grand revenge scheme against Splinter.  Shredder comes off as a tad unhinged in this issue, citing Hamato Yoshi as a traitor within the ranks of the Foot Clan… even though Yoshi hasn’t counted himself amongst their number in centuries.

As for the Turtles, aside from a few conversations with Splinter and April or Harold and the Fugitoid, they kind of sit this issue out.  That’s fine, because the other cast members needed their time.  From the Turtles' angle, the only disappointment I felt was that the big “cliffhanger” to this issue was seeing the lair invaded.  Again.

It’s starting to lose its narrative shocking power when the lair keeps getting ransacked by the bad guys.  I’m not saying that I’m not looking forward to the fight, whether it’s drawn by Santolouco or Smith (they’re switching back and forth this arc, but both artists are awesome).  All I’m saying is we’re on our fourth go at this since the series started, you know?  Rather than function as a surprise, what we're really learning is that the IDW Turtles are terrible at hiding.

There’s a very small thing in this issue that got me thinking, too.  The cop that accompanies Detective Lewis (bet you forgot about her, right?) mentions in confusion that he thinks he saw “a giant white fox”.  Lewis brushes him off because she doesn’t want to deal with any extra paperwork (also, she’s had experience with mutants).

What that got me thinking about is something that the IDW series has sort of been missing for a while, now.  We’re not getting any outsider perspectives on this universe.  There are mutants running around out there, leading gangs and knocking over buildings and robbing ATMs and all sorts of out in the open shit.  But we haven’t gotten an idea of how the civilians in this universe are taking this sort of thing since the “Blood Brothers” arc, when a TV news report gave Slash his name.

Mutants seem to be becoming more and more common, at least in New York, to the point where all those neighbors rally behind Alopex without a second thought.  The narrative has been stuck in a sort of “tunnel vision” for a while as we follow the main characters and their allies exclusively.  They talk about saving the world and all the people in it, but we sort of need to see more of all those people they’re saving and know how they feel about mutants and superheroes/vigilantes and ninja gangsters and all that other crazy shit.

It says something when Mrs. O’Neil calling the cops on Hun surprised me.  “Oh yeah, cops DO exist in this universe and people can call them to arrest criminals.  I just thought all these mutant and ninja and gangster problems sort of resolved themselves.”

But really, the issue was good reading even in spite of my nitpicks or somewhat critical observations.  Yeah, the lair getting invaded is old hat in the IDW series by now, but if the action winds up looking really cool (and no doubt it will) then who cares.

“Attack on Technodrome” and “Vengeance” are maybe a bit of house-cleaning, tying up arcs and getting rid of characters who have hogged attention since the book began, but we’re also seeing legitimate character growth.  And much of it is from the characters who have either been sidelined (Casey and April) or stuck in a rut due to time constraints (Karai).  So that’s pretty great.

Grade: B (as in, “But how does the ooze work on Hun?  Will he lose all his strength without a fix or is he super strong for good now and can break out of jail whenever he wants?”)