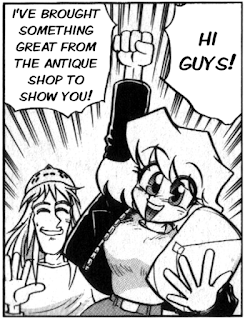 This is it!  The final chapter of the Comic Bom Bom TMNT III manga adaptation, translated and ready to read!

As always, I want to thank Adam Winter and M. Russell for providing the very rare raw scans of the comic, and Cryomancer of the Optical Internet Translation gang for all the image clean-up and lettering.  The translation on my part wasn't always easy (Cryo actually clued me into a few pop culture references that flew over my head!), but I'm very pleased with the finished product!

The OITG will have a full volume edition available in the future and I'll update when that happens.  If you missed the first 5 chapters, they're indexed here for your convenience.

I'll probably do a write-up about this manga and maybe some comparisons between it, the movie, the American comic adaptation and the less-interesting Dengeki manga adaptation.  Probably for Adventures in Poor Taste; I'll update here, of course.

As for the future of TMNT manga translations here at TMNT Entity?

Well, they've never been my most popular feature, but I've had a lot of fun doing them and it's been great working with Adam and Cryo, both of whom are very passionate about these projects.  We're almost out of TMNT manga (that aren't episode adaptations), but there are a couple shorts that Adam has dug up that we might do in the future.  It'll be a while, but they're on the backburner for "someday".  I'll be all out of Mirage TMNT comics to review, soon, so it'll give me something to do after I cross that bridge.

Anyway, I hope those of you who have been reading the manga as we've been translating it enjoy this finale.  As you've no doubt already guessed, it is QUITE different from the TMNT III film.