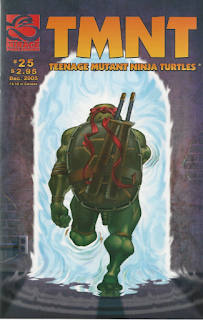 The smiling alien unleashes the Guardifriend on Shadow.  She tries to escape, but the tiny robot is incredibly strong and destroys her dirt bike.  It pursues her into the forest, wanting to “play” with her.  Shadow calls Stainless Steve Steel on her cell phone, but gets the answering machine (her message is heard by Metalhead, however).  Shadow continues running, accidentally dropping her phone in the process.

Down in the lair, Leonardo finishes translating the scrolls that used to belong to Splinter.  Along with information about the “Battle Nexus”, he finds phrases about “Warriors of Perfect Virtue” and “shark-toothed swords”, all which sound like the mystery warriors who have been targeting the Foot Clan. 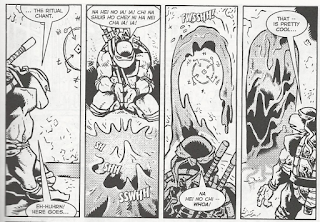 Leo follows the ritual on the scroll, drawing symbols on the wall, pouring water on the floor beside it and chanting in a specific way.  The water creates a doorway to another realm and Leo decides to walk through it.  As he enters, the doorway collapses back into a puddle. 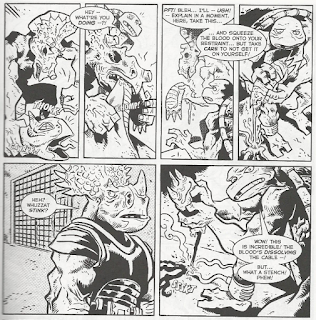 In the Styracodon prison, a weakened Michelangelo begins to lose hope that he’ll ever escape.  Meanwhile, the blind Triceraton Azokk smells the newest prisoner: An O’Quaqui.  Seizing his chance, Azokk tears a limb from the alien with his teeth and pours its blood on his shackle.  He then urges Mikey to do the same without getting any of the blood on himself.  The alien blood, acting like an acid, dissolves the shackles.  Mikey then manages to defeat the Styracodon guard and the pair escape. 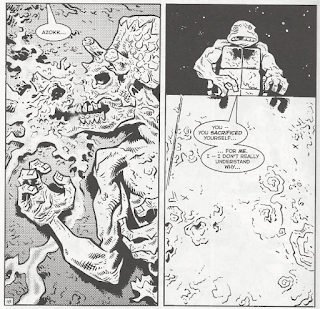 Azokk and Mikey make it to the prison wall.  Azokk, however, is quickly dying due to the alien blood he got on his face.  He tells Mikey to go on without him and with his last ounce of strength, gives Mikey a boost to the top of the wall.  Mikey looks back and sees that Azokk has dissolved and died. 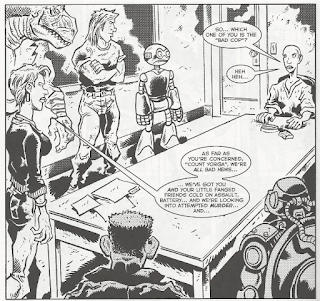 On Earth, Raphael, Donatello, Casey, the Fugitoid and the NYPD Xenosquad interrogate “Count Yorga”, one of the vampires who bit Raph and mutated him.  With the police’s permission, the Fugitoid takes a blood sample from the “vampire”, as he believes it contains an infectious alien agent. 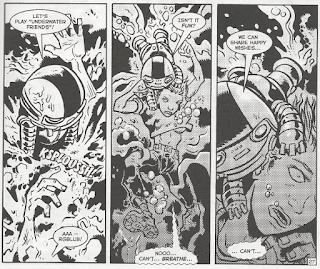 And back in the woods, Shadow is still being pursued by the Guardifriend.  She tries to escape downriver on an old canoe, but the Guardifriend can swim.  It crushes the canoe and then drags her underneath the water.

*I think the NYPD Xenosquad characters are Sergeant Xitor and the unnamed Police Captain, who first appeared in the short “The Grape” and would infrequently appear in stories after that.  They aren't addressed by name and are drawn a little differently in this issue, so I’m not sure.

Alright, Mikey’s escape from space-jail!  This was one of those moments from Volume 4 I actually managed to remember pretty vividly, as it was one of the rare instances where something freakin’ happened.

Mikey’s stay in prison was a cool little arc that didn’t outlast its welcome.  I think he was only in the joint for 3 or 4 issues before breaking out, so the whole experience didn’t have the chance to devolve into stagnating tedium.  Azokk was an interesting character, and while I would have liked to have learned more about him, he ultimately serves his purpose.  His death by alien blood was pretty brutal, especially for this comic.

As for Mikey’s storyline, we'll kind of be entering into that “tedium” situation I remarked upon last paragraph.  He’ll have adventures from this point on, but it’s another case of “its ten years later and we still don’t have any answers as to why any of this happened in the first place”.

Regarding Leo, I know I said I’d talk about the Battle Nexus in this review, but I thought we were actually going to see the Battle Nexus in this issue.  So it’ll have to wait until next time.  The synergy with the then-current 4Kids TMNT cartoon was an exciting touch at the time; the Mirage comics for years had avoided cross-pollination with the mainstream TMNT brands outside of small gags, so this was something of a new experience for fans.

“Count Yorga” gives a blood sample.  That’s… pretty much all that happens in the Raph/Don/Casey arc.  I think those are the NYPD Xenosquad characters who appeared in the Professor Obligado serial and Tales of the TMNT (Vol. 2) #58, but I’m not sure (they’re unnamed and drawn a little differently).  If it is them, then that’s a neat reference, since those characters hardly ever appeared, otherwise.

Okay, so maybe it isn’t THAT clever, but it’s something.  And I’m actually looking forward to seeing Metalhead in the comic again.

All in all, this upsurge in action in Volume 4 has been very welcome.  While I think we’ve pretty much gotten all the answers we’re ever going to get out of this series (at least speaking from the year 2015), there are still some suspenseful moments to enjoy through to the end (or the last hiatus).  Even the Don and Raph arc is about to get a little better in coming issues.  Can you believe it?