Tales of the TMNT Vol. 2 #71, "The Paradox of Chudnovsky", gets new frontispiece and epilogue... in Russia. 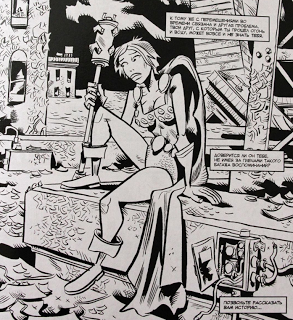 First Spanish, now Russian; it seems like this story is going to be officially published in every language but English!

The cool news is that Arseniy Dubakov, who has been publishing officially licensed TMNT reprints for the Russian market via his Illusion Studios imprint, will be publishing "The Paradox of Chudnovsky" in January of 2016.  It will be available in a trade collection of Tales of the TMNT Vol. 1, which will require some crowd-funding via Boomstarter for the most deluxe presentation.

This new edition of the old story features a new frontispiece (based on the old unofficial one by Prokopyeva/Dubakov) and a new epilogue by Jim Lawson and Andrew Modeen.  Together, they make some sense out of the story and stitch it back into the timeline of the Mirage series.

I added summaries of the new content to my old review.  Also streamlined the publication timeline for this thing, which has endured quite an odyssey over the years.

Still waiting for this story to be officially published in English (not holding my breath), though it's cool to see it getting new bells and whistles in other markets.  Illusion Studios has a number of TMNT and Paleo comics available in Russian, officially licensed, and you can find them at their eBay store.

Ya know.  On the off-chance any Russian people visit my site.