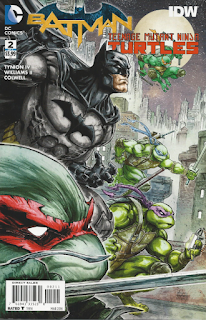 In the streets, the Turtles take on Batman and get absolutely wrecked.  Batman accuses them of attacking the laboratories, but Leonardo insists they were trying to stop the evil ninja.  Splinter eventually shows up and, after matching Batman blow for blow, uses a smoke bomb to get himself and his sons out of sight.  Batman, having secured one of Raphael’s sais, decides to go to an expert for answers. 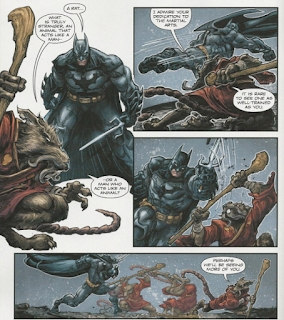 At an arcade/internet café, Donatello does some research and discovers that Batman is a vigilante superhero (who punches clowns), which of course makes Michelangelo swoon.  Raphael isn’t so impressed with him and simply wants to get back to their own world before Krang starts too much trouble.  Leonardo thinks Batman fought like a detective, gauging his enemies with each strike, and is impressed with his technique.  They await Splinter’s verdict on their enemy, but their sensei has gone off on his own mission. 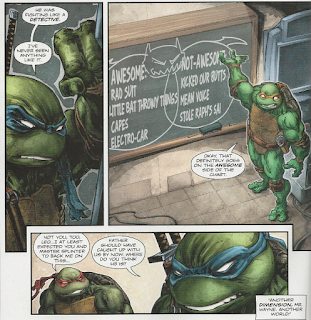 At Wayne Tech, Bruce Wayne brings Raph’s sai to Lucius Fox for analysis.  Using data from the (now kidnapped) Dr. Naveen Khan, Lucius determines that the sai and its owner are from another dimension.  The elements of the sai and the mutagen-laced DNA on it are slightly different from those in their dimension and are trying to adapt to the physics of this new universe.  While that’s fine for the sai, the mutagen in the DNA does not exist in their dimension and is slowly becoming inert.

In other news, Lucius informs Bruce that Dr. Khan’s project for Wayne Tech involved building a functional dimensional portal.  Looking at the tech stolen by the ninja, he believes they have everything they need to build the portal except one piece: A resonance engine.  Wayne Tech’s engine has been successfully hidden in Central City, but Bruce thinks they aren’t out of the woods, yet.

Bruce calls up Alfred, who informs him that Wayne Tech licensed resonance engines to five other agencies; the one sent to the Department of Defense has been reported missing.  Donning his cowl, Batman tells Alfred to use the Witch Eye program to scan the Gotham City sewers for the mutants, who may not be mutants much longer.  He then leaves to find who is selling the engine.  Unbeknownst to Batman, Splinter has been hiding in the rafters, observing the whole conversation. 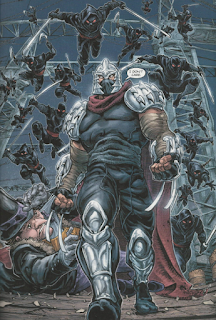 At the docks, the Penguin greets the Shredder and his men unload the stolen resonance engine.  Shredder betrays Penguin and orders his Foot Soldiers to kill everyone.  Penguin successfully barters for his life, offering to use his knowledge of the Gotham underground to help Shredder meet his goals.  Shredder agrees to spare him and gloats that with the Turtles slowly de-mutating, nothing will stand in his way.

Crawling through caves on the outskirts of the city, the Turtles get the bad news from Splinter.  Splinter tells them that only one man can possibly help them get home before they all de-mutate.  They then slip through a crack in the wall, entering the Batcave.

I think this issue’s one fault is that it’s rather front-heavy with the action.  The TMNT vs. Batman takes up 9 pages at the start of the issue with the remaining 11 pages dedicated to all the info-dumping.  It’s a thrilling start, don’t get me wrong, but everything afterward is just “situation establishment”.

Tynion utilizes Batman’s extended cast nicely, as we get Alfred playing eye-in-the-sky (or sewer, rather) and Lucius Fox as the convenient science dude who explains everything for audience benefit.  Together, they sort of fill the void Oracle left behind now that she no longer exists, come to think of it.

The Penguin being the one to sell the resonance engine made for a pretty intuitive cameo, though I wish he’d managed to threaten Shredder with a gimmick umbrella.  But maybe Penguin doesn’t use those anymore; I’ve been out of the Batman game for a few years.

I mentioned that the issue starts out really strong and the opening scene is actually really funny.  Michelangelo runs into a pizza parlor to warn everyone that there’s a lunatic in a bat costume outside, but everyone is more concerned about the giant turtle.  I dunno, but that just tickled my funny bone; all the citizens of Gotham being totally cool with a guy in a costume punching clowns, like it's just some normal thing.

Williams plots a nice brawl between the Turtles and Batman, though TMNT fans may feel displeased that their favored characters took it on the chin so severely.  If it’s any consolation, Splinter goes toe-to-toe with Batman and doesn’t break a sweat, so while the Turtles gave a rather poor showing, the TMNT brand did get its licks in.  And, well, from an in-universe perspective, the Turtles are teenagers and Batman’s in his 30s.  He’s got twice as much experience as them.

Williams maybe resorts to spreads and splashes a bit much.  The two-page spread for the title page looked nice and functioned as a cool establishing shot, but the full page splash of Shredder, um, walking was perhaps overkill.  Comics these days are so damn short, a meager 20 pages, you can’t really waste real estate on mini-posters like you could in the ‘90s.

Anyhow, we’re still getting started, but the first fight between the characters looked quite lavish.  Batman fans ought to be satisfied with the clear winner, though I suspect we’ll be seeing a rematch next issue.

Grade: C+ (as in, “Can’t say I’m big on Penguin having razor-sharp teeth and black eyes.  The idea of the Penguin being monstrously deformed is one of those lingering Batman Returns elements that I wish would fade away already”.)