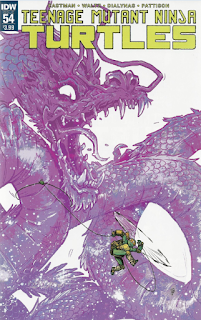 In the secret munitions warehouse, Hun attacks Michelangelo, hellbent on revenge for everything the Turtles have put him through.  Old Hob stumbles in, too late to stop the fight. 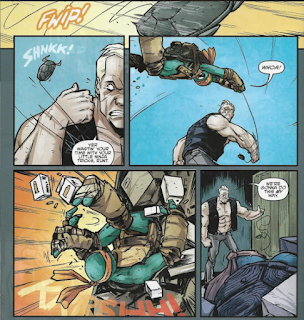 At Mutanimal HQ, Mondo Gecko tells the others that Mikey went off to follow Hob in secret.  Man Ray and Herman the Hermit Crab share a worried glance, which Sally Pride immediately notices (though they deny hiding anything from her and the others).  At Sally’s insistence, all the Mutanimals (save Pigeon Pete, who is still cooking) leave to investigate.  Little do they know, they’re still being followed by the mysterious Agent Winter.

At the warehouse, Hob makes an attempt to calm Hun down, but Hun smacks him away and begins throttling Mikey.  Before Hun can beat Mikey to death, Slash arrives and the two go toe-to-toe.  At first, Hun has the upper hand, but then Slash devolves into a savage berserker and wrecks Hun.  Hob manages to calm Slash down by informing him that Hun is working for the Mutanimals. 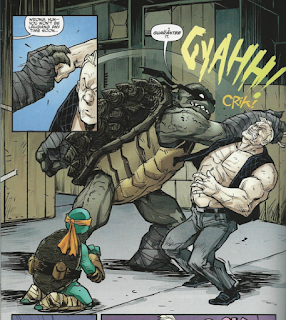 The Mutanimals all want answers and Hob explains that their operation cannot survive without some sort of income.  Should they come up against Null or Stockman or some other nefarious group, they’ll need resources.  So he’s been stockpiling the weapons and goods they’ve stolen from the mob and used Hun to fence them on the black market.  Slash tells Hob that he understands his reasoning, however, he cannot be a member of an organization that puts weapons back on the streets.  As Slash leaves, Hob asks the others if they feel the same way.  The other Mutanimals express their concerns, but none choose to quit the team.  However, Sally demands more transparency from Hob in the future.

Once everyone leaves, Hob turns to Mikey and slashes him in the shoulder.  He tells Mikey that he won’t forget what he’s done and he will never forgive him. 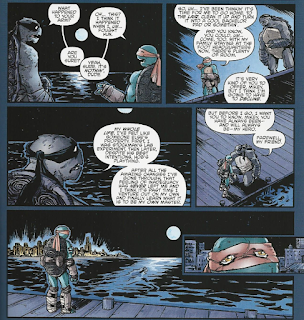 Mikey goes to see Slash on the pier and asks if he’d like to come stay with him at the lair.  Slash says that in the past he’s been an experiment for Stockman and a soldier for Hob, but now he wants to find his own path.  He tells Mikey that he’ll always consider him his own personal hero and then slowly swims off into the distance. 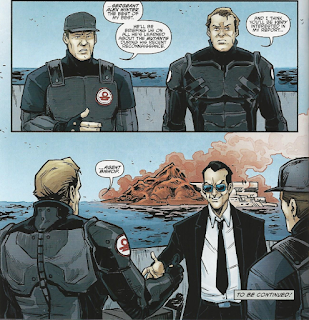 In the waters off of Burnow Island, Colonel Knight introduces Sergeant Alex Winter to the leader of their organization: Agent Bishop.

*Colonel Knight originates from the Fred Wolf TMNT animated series.  He appeared in the season 8 episode "State of Shock".

*Agent Bishop originally appeared in the 4Kids TMNT animated series, premiering in the season 3 episode “Space Invaders, Part II”.  He went on to become a primary antagonist (and later ally) for that series.

*This issue was originally published with 4 variant covers: Regular Cover by Dialynas, Retailer Incentive Cover by Andrew Griffith and Pattison, Subscription Cover by Eastman and Pattison, and Eastman Fun Club Edition by Eastman.

This Michelangelo and the Mutanimals two-parter has been pretty great and I enjoyed it much more than the opening two-parter from this Brave New Era in the IDW TMNT series.  I think what helps is that the diverse cast of the Mutanimals are so much more colorful and vibrant than the, well, rather bland cast of the TMNT and their human allies.

I don’t mean that to disparage the Turtles, but there’s something you’ll see in the Mutanimals cast that you haven’t been seeing amongst the central TMNT cast.  The different members of the group don’t share the same relationships; they all play off of each other in unique ways.

Sally and Man Ray are friends because they came from the same place, but Ray isn’t above keeping things from her if he thinks it’s of strategic merit.  Hob, Herman and Ray have their own little “inner circle” among the Mutanimals where they plot out the group’s darker workings in private.  Herman, though fiercely loyal to Hob, feels sympathy toward his comrades, including Mutagen Man, and will die for any of them.  Mondo’s buds with everybody, but he isn’t sure he wants to keep on fighting despite his loyalties.  And so on and so on.

I mentioned this way back in a review from some years ago, but the IDW Turtles and their main human chums (April, Casey) don’t share the sort of friction between them that makes their interactions feel individually tailored.  They all get along.  You have a group of 9 or 10 characters (once you factor in Splinter, Nobody, Alopex, Harold, etc.) and they’re all just… friends.  Donatello should never interact with Casey Jones the same way Raphael does, otherwise everyone is just sort of spouting interchangeable dialogue.

We’ve been getting away from that lately, what with Michelangelo leaving the team, but there needs to be MORE of it.  Until then, the central cast is going to continue to be outshone by second stringers like the Mutanimals.

In terms of plot, we get a reminder of how pragmatic Hob is and exactly what his ultimate aims are, but he still isn’t a full on villain.  His goals are still altruistic, if a bit misguided.  And the strange bedfellows he’s been making aren’t helping.  It’s one of the things that’s made him the most complex character in the whole comic; he’s gotten the kind of development and progress that I suppose the main characters are exempt from.

I’m sure if the writers grew and changed Raphael into something organic but unrecognizable as Raphael, Viacom would put the kibosh on that right quick.  The central characters sort of have to remain at a level of stagnancy or it just won’t be “them” anymore.  But IDW original characters like Hob can do and become whatever they want, and as a result, AGAIN, they’re becoming way more interesting than the central cast.

And then there’s Agent Bishop.  I think we all saw this coming, right?  A mysterious military-looking organization monitoring the Turtles and the Mutanimals, who ELSE could be leading them?

Bishop was one of the best original ideas to come out of the 4Kids series; maybe even THE best, depending on who you ask.  By the fourth season, he massively upped the ante as the main antagonist and outdid the Shredder in every way.  What was cool about him was that, much like Hob, he wasn’t a character of black and white (outside of his wardrobe).  He was in a grey area; everything he did was in the name of national security and he genuinely believed in the altruism of his cause.  Of course, that still brought him into conflict with the Turtles and he did some heinously nasty things throughout the series.

But that’s okay, because one time he got impaled on a fucking meat hook.  A MEAT HOOK.

He opens the door up to get the government or the military involved in these shenanigans, which should be interesting, as they’ve been absent throughout the IDW series so far (heck, even the cops have rarely shown up until now).  This could potentially complicate things in a fascinating way; if Bishop’s working through Dark Water then we’ve got one more faction to keep track of in this chess game of a series.

Dialynas did a fine job on the fight between Mikey and Hun.  There’s a nice two-page spread (made up of panels) that features Hun just totally wrecking Mikey’s shit.  It reminded me of the first season of the 4Kids cartoon, before Hun had begun to suffer from Villain Decay and was portrayed as a sort of unstoppable juggernaut.  You can see Mikey’s really trying in Dialynas’ layouts, but he can hardly scratch Hun.  Dialynas does good work on character expression, as Hun grows progressively more psychotic and Mikey gradually goes from cheerful and confident to shitting his shell.

Good arc!  Love these smaller two-parters; a nice break from the four-part or lengthy event formats.  Hope we see more of them in the future.

Grade: A- (as in, “Although with Slash gone, maybe Leatherhead can pick up the baton as ‘character who is really smart but turns into a mindless monster when angry’.  Can’t have two characters with the same shtick at the same time, after all”.)