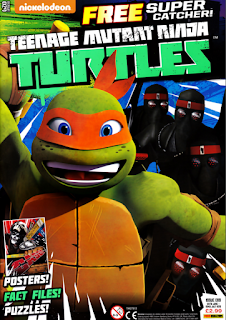 "Nothing up his Sleeve!"

The Turtles are out patrolling the rooftops when they hear a couple pedestrians below talk about a street magician.  Michelangelo convinces his brothers to check the magician out and they quickly locate Xemnar the Magnificent doing his act.  Xemnar tricks a member of the audience into thinking he swiped his watch and returned it, while in reality, the crooked illusionist picked his pocket.  Seeing this, Leonardo tells his brothers to corner Xemnar as soon as he makes his leave and get the stolen goods back. 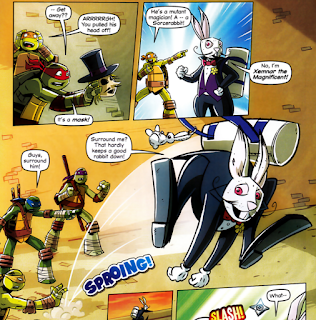 As Xemnar escapes into an alley, the Turtles confront him.  Raphael tussles with him and pulls off a mask, revealing that Xemnar is actually a mutant white rabbit.  Using his jumping abilities, Xemnar leaps to the rooftops and escapes.  However, he leaves behind his duffel bag and lucky charm (a rabbit key chain).  The Turtles then spend the rest of the night discreetly returning the wallets to their owners.

At Xemnar's apartment, the magician is ticked that the Turtles have delayed his trip to Las Vegas, as well as stolen his lucky charm.  He decides to get a new one and begins looking through the paper for an idea.

Down in the lair, Donatello and Leonardo are trying to predict Xemnar's next move, with all evidence pointing to the upper west side, though they aren't sure exactly where he'll be.  Mikey has another suggestion and, dressing like a wizard, claims they should fight magic with magic.  He does a simple disappearing ball trick (hidden up his sleeve), but the use of rudimentary misdirection gives Leo an idea.  Leo realizes that Xemnar is also using misdirection and Donnie figures he's probably targeting the lower east side. 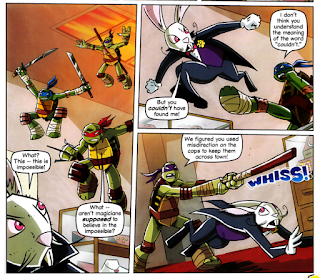 Later, at a jewelry store in the lower east side, Xemnar pockets a diamond rabbit broach he saw advertised in the paper.  He starts to loot the rest of the jewels when the Turtles drop in from the skylight.  They figured his misdirection ruse and began looking up likely targets in the lower east side; the jewelry store with the diamond rabbit being the obvious choice.  Xemnar leaps toward the skylight to escape but is blocked by Mikey.

Xemnar is quickly tied up and left for the cops as Mikey suggests that he should have spent less time studying slight of hand and more time studying escape tricks.

With this story, Erik Burnham creates the most 80s-est of 80s TMNT toyline characters that never existed.  A mutant white rabbit with a stage magician gimmick is so damn obvious in retrospect, I can't believe we never got it back in the day.  We got a pilot duck, an African elephant witch doctor, an outback survivalist kangaroo and a Mountie moose, but no magician rabbit?  Someone at Playmates was sleeping on the job.

Admittedly, "Xemnar" isn't a very catchy or marketable name.  I think Burnham knew that and was playing around with it, as there are several BETTER names offered to him throughout the story.  "Sorcerabbit", "Robin Hare" and "Hare-y Houdini".  Okay, not exactly top tier stuff but its on par with "Monty Moose".

The story fits in nicely with the season two storyline about weird mutants popping up every which where thanks to the scattered mutagen canisters, so Xemnar's origin never needs explaining.  Mutants were also becoming a public scourge that season, so the idea of an anthropomorphic rabbit being left for the cops to arrest isn't so out of the question, either.  Maybe without any knowledge of the cartoon and read in a vacuum, "Nothing Up His Sleeve!" is a little bewildering, but this comic has been a supplement to the cartoon since Day One so cut it some slack.

The plot holds together well, all conveniences and cliches aside (there's the "character says something nonchalantly and his words inspire another character to find the solution to the problem that's been vexing him" thing, but at least we were spared the "Mikey, you're a GENIUS!" dialogue that usually accompanies the tired gag).  It's certainly not a challenging story, but it isn't filled with plot holes and nonsense, falling back on the "it's for kids so it's okay if its shit" excuse a lot of writers of these types of comics give.  So I appreciate that.

Buchanan's art is what it's been in the past few issues.  Rather listless and not particularly emotive.  His layouts on the pages where Xemnar shows off his jumping powers look pretty good, but the finishes drain most of the kinetic energy from them.

Anyway, it's always good to get a new mutant villain in addition to the ones seen in the cartoon.  Xemnar's better than Slug, at any rate.