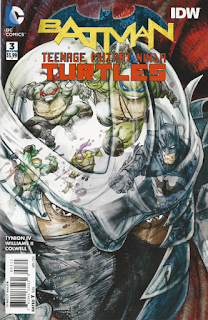 From the Iceberg Lounge, the Shredder looks over Gotham City with sinister intent while the Penguin grumpily informs him that the portal is ready and the Foot Clan can leave.  Shredder isn’t in such a hurry, as he now plans to rule both the New York City of his world and the Gotham City of this world (much to the Penguin’s dismay).  Shredder orders his Foot Soldiers to retrieve Dr. Khan so that the scientist can monitor the portal and keep it from destroying reality once activated. 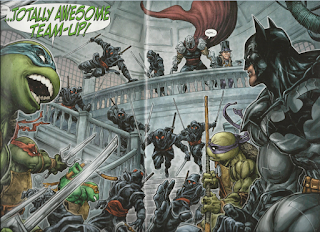 Before the Foot Soldiers can get to Dr. Khan, Batman gets to him first.  He leaves Khan with Alfred to be taken to safety and then storms the Lounge where the portal is… flanked by his new partners: The Teenage Mutant Ninja Turtles (and Splinter).

Two hours earlier.  At Wayne Manor, Bruce Wayne and Alfred look over the city plans on a virtual map.  There has been no trace of the mutants in the sewers, however the Foot Clan has been very busy, murdering mercenaries and ne’er-do-wells in a bid for power.  Even more concerning is that all the power from Gotham’s secondary grid has been funneled to the Iceberg Lounge, indicating that the Foot are powering up the portal.  Suddenly, the Batcave’s security alarm goes off. 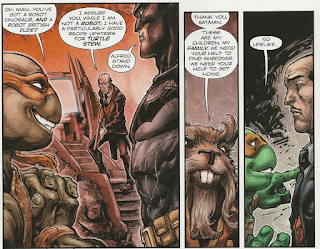 Batman demands answers and Splinter explains that they were doing battle with the Shredder and the Foot Clan deep beneath the New York City of their universe.  However, Krang, a mutual enemy of the Turtles and the Foot, used a portal to teleport both parties across dimensions, hoping to be rid of them all forever.  Batman says he can get them home before the mutagen in their systems goes inert (due to the physics between dimensions being different) and together they leave for the Iceberg Lounge. 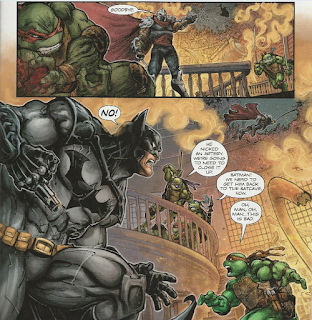 Now.  The Turtles and Batman make short work of the Foot Soldiers, but Shredder isn’t licked yet.  He sets off an explosion, destroying the portal so that the Turtles can never get home.  He’s fine with staying in this universe, but the Turtles and Splinter will inevitably de-mutate.  Batman reassures the Turtles that with Dr. Khan safe, the portal can be rebuilt.  Alfred then radios him with the bad news that a miniature bomb implanted in Khan’s head detonated, killing the scientist.  Raph attempts to attack Shredder only to get badly slashed across an artery.  The Turtles have to get him back to the Batcave before he bleeds out and Shredder uses the distraction to escape via helicopter. 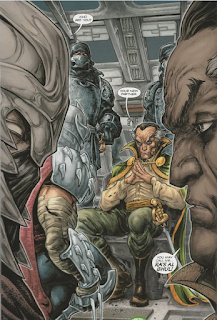 Once inside the chopper, though, the Shredder discovers his Foot Soldiers have been replaced by different ninja.  He is then greeted by their leader, Ra’a Al Ghul, who would like to propose a partnership.

*Alfred says that Gotham’s secondary power grid was installed in the wake of “Zero Year”.  Batman: Zero Year ran through Batman (2011) #21-33 and was the character’s revamped origin for DC’s New 52 reboot.

So this crossover is pretty much giving me everything I ever wanted.  We’ve gotten the gratuitous “Batman and the TMNT fight each other” requirement out of the way (he just sort of shoves them a bit in this issue), so now we’re at the glorious team-up stage of the affair.  And with three issues left!  Still plenty left to enjoy.

Tynion has been showing a lot of intuitive knowledge of both universes and characters, and the way the Turtles all individually geek out during their tour of the Batcave is a perfect example.  Of course Donatello would drool over the billion dollar technology (because he has to make do with garbage he finds in the sewers).  Of course Leonardo would swoon over how organized and prepared all the many resources are (because he’s so damn boring).  And of course Michelangelo would ride on the back of the robot t-rex and play with the various trophies (because he has the mental capacity of an eight year-old).  Meanwhile, Raph is pretty much in the COOLEST PLACE IN THE UNIVERSE and he’s still a grumbling, whiny grouch because that’s Raph.  He’s that teenager that doesn’t want to have any fun because “fun is for BABIES!”  We all knew a teen like that at some point in our lives.  Maybe YOU were that teen.  But I hope not.

I love the little moments like that.  Much of this crossover is sending echoes down my brain recalling Erik Burnham’s TMNT/Ghostbusters miniseries, which featured the Turtles interacting with the cool shit from that universe but in their own unique ways.  And that was half the fun of the Ghostbusters crossover.

And speaking of team-ups, if the Shredder/Penguin union wasn’t doing anything for you, it looks like we’ve got a more equal partnership on the horizon.  Shredder and Ra’s might as well be alternate universe counterparts to one another (particularly IDW’s Shredder who has survived centuries by dunking himself in rare liquids), which will no doubt lead to them hating each other.  I mean, I like the Penguin and all, but he’s never been a top tier Batman villain and I think we were all holding out for a more A-list bad guy to show up and share the spotlight.

Regarding the action in this issue, I was a little surprised at the violence of Dr. Khan’s death.  I guess I forgot that this crossover is being done by DC, not IDW, so that probably explains why his demise was gorier than what we’re used to seeing in the current TMNT comics.  Yeah, in IDW’s book, characters get their heads chopped off all the time, but it’s always done “tastefully”; the cut occurs off-panel or we see the cut but not the gushing aftermath, etc.  In this issue, we get to see a headless torso with a blood-spattered collar.

IDW editor Bobby Curnow stated that this miniseries, though inspired by the IDW Turtles, is not canon with the IDW series.  And likewise, with the direct reference to “Zero Year”, this mini is taking its cues from Batman’s current New 52 series but is no doubt non-canon to Scott Snyder’s Batman series.

So with all that in mind, it might not be worth the mental effort to try and wedge this miniseries into the IDW chronology.  But, if I had to TRY, I guess it could fit in somewhere between TMNT #37 (when Shredder and Krang declare war on each other) and TMNT #41 (when the continuity gets too dense for anything extra to happen).  More specifically, I'd put it before the TMNT/Ghostbusters crossover (which is also right before #41), as that's the miniseries where the Turtles get their interdimensional portal up and running, and with them not knowing how one works in this miniseries, I'd think it would have to go before that.  But we're still three issues from being done, so we might get a more definitive clue later on.

Artwise, I'd say this is Williams’ best issue, yet.  There are a pair of beautiful two-page spreads: the title page that opens up the battle with the Foot and a montage where Splinter recaps the IDW TMNT history (or a vague allusion to it).  They’re very handsome pieces (and those colors by Colwell are superb) and he slouches on nothing; I can’t believe this book is making it out monthly!  There’s also a nice juxtaposition between Batman and the Turtles; Williams draws Batman in his modern ultra-serious look, but the Turtles retain that element of exaggerated, cartoony expression.  They still fit in aesthetically, but he doesn’t over render them in to fit a DC “house style”.

All that being said, the way he draws Gotham City’s establishing shot, particularly all those bunched together buildings that rise like an overstuffed bouquet, reminds me of something… 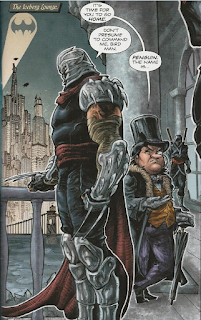 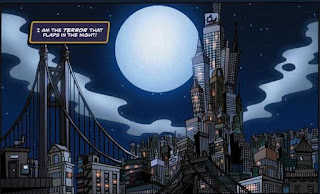 Batman/TMNT has been great stuff thus far and I’ve no doubt it’ll be great stuff through to the conclusion.  As with most crossovers, the fun comes in seeing as many characters interact as possible even if the story is somewhat thin.  I’m really just in it for the team-ups and I’ve been getting plenty of that, so I’m satisfied.

Grade: B (“By the way, there will never be a better Ra’s Al Ghul voice than David Warner’s.  Never.”)