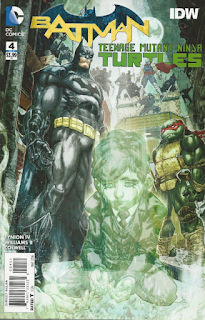 At Arkham Asylum, Dr. Zaheer concludes her interviews with the twenty members of the Foot Clan whom Commissioner Gordon had committed.  As she leaves (having learned nothing), she’s accosted by the Joker from his cell.  He feels like a big “party” is about to go down and can’t wait to have fun. 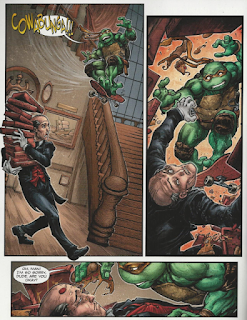 At Wayne Manor, Alfred pays for a delivery of pizzas only to get knocked down by Michelangelo as he skateboards in the mansion.  Down in the Batcave, Leonardo and Batman spare as Splinter plays mediator.  Meanwhile, Donatello communicates with Cyborg to try and find an alternative cure for their degrading mutagen, though they can’t come up with anything better than “get home ASAP”.  As for Raphael, he’s brooding in a corner.

Alfred comes down the steps with the pizza and all the Turtles, and Batman, enjoy their dinner.  All except Raphael, who has finally had his fill of fun and games.  He accuses Batman of being a spoiled rich guy who fights crimes for kicks.  The Turtles, on the other hand, have to fight the Shredder to keep themselves alive.  And because of this, he doesn’t feel Batman is taking their plight seriously and storms out of the Batcave.

At a warehouse, Ra’s Al Ghul and the Shredder finish constructing a new transdimensional portal.  Shredder informs Ra’s that Dr. Khan had detected an anomaly trying to connect with the old portal from his home dimension.  Shredder had the transmission blocked until he could figure out what the anomaly was.  The League’s scientists have been able to identify it and Shredder explains that it is exactly what they need.  The Foot Soldiers open the portal and out steps Casey Jones carrying several canisters of mutagen. 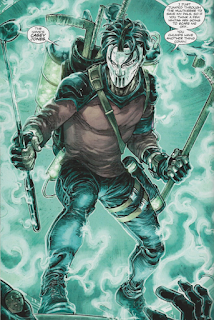 14 miles outside Gotham City, Batman pulls the Batmobile up alongside Raph and asks him to get in so he can show him something.  Back in the Batcave, Donatello’s transdimensional warning alarm goes off; someone has opened up a portal back to their world.  Figuring it’s the Shredder, they track the energy to a warehouse in the Narrows.  Much to Alfred’s displeasure, the Turtles head there by borrowing one of the older model Batmobiles (the Batman: The Animated Series model).

In Gotham City, Batman takes Raph by Crime Alley and tells him his origin story.  However, the history lesson wasn’t intended to guilt Raph for his outburst, but to show him how much he values family, and Batman swears to save Raphael’s family no matter what.  He then gets word from Alfred about the warehouse and Batman and Raphael head there in the Batmobile. 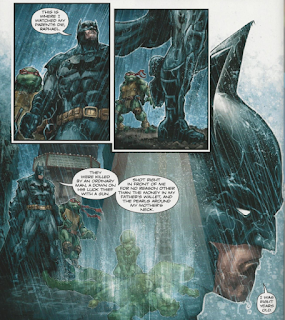 The Turtles arrive at the warehouse in time to save Casey, who had been fighting tooth and nail with Foot Soldiers.  Unfortunately, he was unable to keep the mutagen canisters from them.  He’d brought five cans along to help the Turtles (and had a hard time getting them in the first place), but now that the Shredder and “the guy in the green cape” have them, that means trouble.  The Turtles ask if he knows where the bad guys are headed and all Casey heard was the word “Arkham”.

Many of the events in this issue are perhaps a bit inexplicable and spontaneous.  Raph throwing a fit and getting the Crime Alley story from Batman, Casey Jones showing up to fight the League and the Foot, and next issue it looks like we’re gonna get mutant Batman villains.  But you know what?  SO what!?  Would you seriously turn down the chance to see the Turtles and Batman team-up to fight mutant Arkham Asylum super villains?  I don’t care how tenuous the narrative that got us there was; that’s something I’ve gotta see!

But yeah, this particular issue was more all over the place than the past installments.  Raph getting a special drive out to Crime Alley was maybe a little much, but it gave Raph something to DO and that’s more important than you think.  Thus far, no characters have drifted off into the scenery in this comic; you’ve got a central cast of about 9 or so individuals and none are getting shortchanged.  In this issue in particular, every Turtle and Splinter got a moment to themselves, as did Batman and Alfred, while Shredder and Ra’s continue their machinations.  And Joker and Casey managed to show up, too!  It really is impressive how well Tynion juggles such a large cast with a scant 20 pages.

With Casey showing up, mutagen canisters in tow, you can see how this miniseries works best as “inspired by” the IDW TMNT series and not a direct crossover with it.  Tynion plays it loose with the continuity, brushing aside the presence of mutagen with a quick line from Casey expressing how hard a time he had getting the stuff.  A major plot line in the IDW book revolves around how difficult it is to obtain ooze (the prime ingredient in mutagen) and there isn’t really anyway for Casey to have gotten the stuff except for maybe a deal with Old Hob and the Mutanimals.  Perhaps Tynion will go into further detail as to how Casey got the mutagen to smooth over continuity, but I wouldn’t lose my hair over it.  Again, it's “inspired by” the IDW series and not a direct crossover, so he’s under no obligation to tie everything together in a perfect knot.

(That said, if Casey was using a fully functional transdimensional portal then that would place this crossover right after the TMNT/Ghostbusters miniseries but before the "Attack on Technodrome" arc of the ongoing.)

Speaking of Casey; man, what an entrance.  I know splash pages are gratuitous fluff, but Williams just sold the hell out of it.  I love seeing Casey smack around Foot Soldiers; it’s a nice reminder that you don’t need to be a ninja to play with the big boys in the TMNT universe.  A tough guy with a baseball bat can hold his own quite well.

Williams draws a good Joker, too.  It’s based on my favorite depiction of the character; the Jim Aparo type with the long, skinny chin and cartoonishly huge teeth.  I know Aparo didn’t originate that aesthetic for the Joker (Neal Adams was doing it in the ‘70s), but I’ve always associated it closely with him because he really, really embellished it (though maybe not as much as Jim Lee, who drew a Joker that looked like Mac Tonight).  And I’ve always loved it when other artists, such as Tim Sale, took that design cue and ran with it.  I mean, I like the Joker when he’s designed with more realistic facial proportions (Doug Mahnke and especially Marshall Rogers), but the cartoony look suits him so well, particularly when everyone else has more subdued features.

So yep, I’m still loving this miniseries.  It isn’t skimping on the action or the humor, and best of all, all the characters are participating every step of the way.  While this issue was perhaps more haphazard than the last few, I can’t say it wasn’t entertaining.

Grade: B- (as in, “But the Animated Series Batmobile was an almost excessive crowdpleaser.  At this point, they’re just gilding the lily”.)